Keep things simple and paying attention to detail is paying off for Kioma Farming.

Cropping four farms in the Tulloona, Croppa Creek and Pallamallawa, NSW, area, in a region known as the Golden Triangle, Kioma Farming is a partnership between Tim Mooney and his mother Judi.

Mr Mooney said the ethos of Kioma Farming was to get the basics and timeliness of operations on their farm right while being prepared to take advantage of opportunities as they arose. "We like to keep things simple and pay attention to detail, while looking forward to those one per-centers of the business that can really make a difference," he said.

Mr Mooney said while last year's rainfall total of 365.5 millimetres was significantly lower than the home farm's average of 606mm, Kioma still managed to get a crop off.

"While the last few years have been quite inconsistent in terms of rainfall, we have had some luck," he said.

"While rainfall seems to be sporadic recently, our farming system has coped well with what rain has fallen. A conventional farming system in a year like 2018 would have not produced a crop at all.

"2016 and 2017, were great years. We consecutively set two personal bests for production in those years. The cereals were terrific, but it was the chickpeas that performed incredibly well."

Aiming to increase productivity and strategically manage agronomic constraints and risk, Mr Mooney said he and his mother, Judi, tried to keep a set cropping rotation.

"We try to keep it simple, but it is generally chickpeas, wheat, barley and sorghum. Chickpeas are an important part of the set cropping rotation.

"On our heavier country we are trialling dropping the wheat out in favour of barley on our cracking clay soils. We are finding the barley is performing better, getting in and getting the job done prior to harsh October heat and the soil cracking and venting stored soil moisture."

Mr Mooney said he believed retaining stubble through no-till farming had been a key to Kioma's success.

"We run a no-till farming system with very few exceptions, and have been doing so for decades," he said.

"In our area a lot of farmers would consider that the norm.

"The odd time we have cultivated a field, rarely has it been for weed control, more for levelling fields." 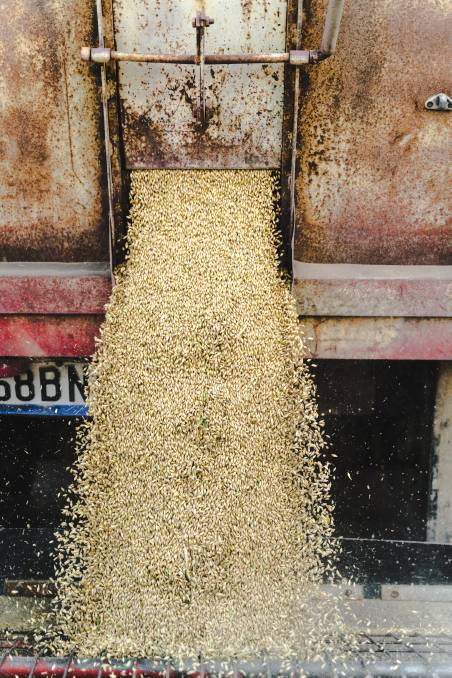 "At least so far, we have had a lot of success managing our weeds, but weeds are certainly getting harder to control," he said.

"Our system is largely focused on rotating residual herbicide chemistry across our fallows.

"We have also been using a WeedIt optical sprayer since 2012, which has been an interesting adventure, as far as working out how best to utilise that in our farming system, in conjunction with the residual herbicides.

"By using the residual herbicides post-harvest, we can generally eliminate up to 90 per cent of the weed pressure, then follow through with WeedIt.

"With the WeedIt we are coming around every three weeks, so our spraying frequency has increased, but we still have large savings in chemical," he said. Grain sorghum is a significant part of the crop rotation at Kioma Farming. Photo: Stef Oostvogels

Mr Mooney said double knocks, the application of two herbicides of different modes of action in succession to control weeds, was a common tool he used to control hard to kill weeds and minimise the chances of developing herbicide resistance.

Despite seeking professional agronomic advice from a consultant, Mr Mooney said his time spent studying agriculture at the University of Queensland, Gatton Campus, was of major benefit to his farming business.

"Having the background learning helps you understand the processes and make more informed decisions," he said.

"The first step is to identify the problem, then I refer back to prior learnings and experience myself and my mother have developed on the farm and then source new information," he said. Mr Mooney said new information came in from a variety of sources, including his agronomist, the Grains Research Development Corporation updates and input suppliers.

"I cast a wide net for information, I like to maintain a large and diverse network" he said.

Mr Mooney said recently he has increased his fertiliser applications in line with the results from ongoing soil testing in an effort to ensure he is not limiting his yield.

"Years ago we trialled using a set rate at planting in a single pass, but over time we have decided that doesn't work for our system," he said.

"It is too complex and the logistics behind it add another element of stress when in April, May, June all you want to be focused on is getting seeds in the ground.

"At the time we identified it was possibly saving us some money initially in fertiliser. However, we were then planning to come in with a top up rate later in the year depending on how the season panned out, and that left us reliant on in-crop liquid foliar fertilisers which are more expensive per unit. Mr Mooney said he was also conducting commercial size trials on the deep placement of phosphorus based on recent research by Dr Mike Bell.

"Using an NDF planter I have managed to drill fertiliser in 20 centimetres, in pretty good conditions in a zero till situation," he said.

"A lot of people think that working country after chickpeas is fine. I'm more inclined to say while you have less stubble cover to lose, maybe that is where you really should be trying to keep it. "20cm depth with minimal disturbance is what the industry needs for deep placement. Any other way you do it you need to rip up country with full disturbance." Mr Mooney said it was important for farmers to take the latest research and adapt it to their own farming system.

"Doing trials on your own farm is important.

It's the step between what the research organisations and universities do and what we do as farmers.

"We have to be responsible for our own research along the way, rather than implement research across the whole farm without validating it."

"I had been in a position where I found myself advocating for agriculture on social media platforms, and a friend suggested I contribute in a more structured way," he said. "I saw it as a way I could help shape policy and achieve far more for industry.

"We all need to afford the time to advocate for agriculture.

"It doesn't matter what you're producing, someone has an issue with what it is or how you produce it, they're dying to shut you down, our story is a good one, we are doing the best we can with the science we have and we are in this for generations to come.

"Our story needs to be told."