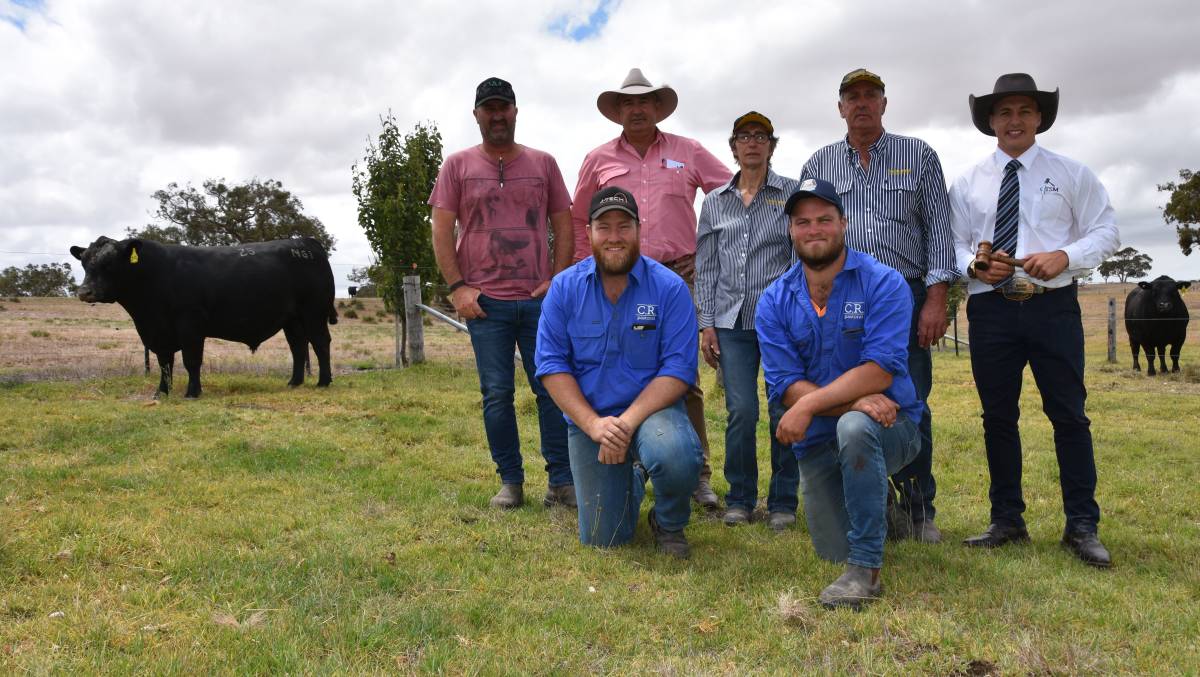 There was plenty of pre-sale stud interest in the outstanding March 2017 drop, but it was large commercial producer Greg Fisher, Clover Ridge, Marcollat, who put in the winning bid with his agent Elders southern zone livestock manager Laryn Gogel

The 924 kilogram, which was out of one of the stud’s top cow families, will be used in Clover Ridge’s bull breeding program.

Mr Gogel said they had visited many Angus studs during Stock Journal Beef Week and Nighthood N61 stood out for his “natural thickness, depth and softness” and balance of Breedplan figures.

The bull was in the top eight per cent of the breed for all Angus$ indexes as well as top 1pc for 200 day and 600 day growth.

“He has got outstanding figures, he is is extremely correct and for the campaign that Greg has been on for the last few years he has got some females with a fair bit of frame, so this bull will just compliment what he has done with the frame,” Mr Gogel said.

Clover Ridge has invested heavily at Granite Ridge over the years, including the 2017 sale topper.

Bids flew for the early lots with 10 bulls making $10,000 or more, but there was plenty of great value in the second half of the catalogue for the 46 registered bidders from three states.

The five Doc sons in the sale averaged an impressive $10,400.

The Bainger family and their advisor Libby Creek, Hillcrest Pastoral Company, Avenue Range, were also in many of the bidding duels putting together 12 bulls for a $5625 average for their Conkar Plains property.

Other prominent buyers included JG&CK Clarke, Kingston, with three bulls for a $8667 average.

This included Lot 2, the heaviest bull in the catalogue at 1026kg.

“Being so dry everywhere we always thought getting rid of so many bulls could be a challenge but there were only nine passed in and another four went after the sale, so we are very happy,” Mr Flanagan said.

He said the result of hundreds of Granite Ridge-sired steers put through Montrose feedlot, NSW, over the past three years was giving them confidence they were on the right track chasing weight for age and carcase quality.

“You can turn off a good weaner (with Granite Ridge progeny) but they also keep growing to produce 1050 kilogram to 1100 kg steers for the export market,” he said.

Earlier this year 100 of these heavy steers dressed out at an impressive 64 per cent.

NSW-based auctioneer Lincoln McKinlay from Glasser Total Sales Management, Wagga Wagga, described it as a “very strong sale” and said the stud was rewarded for one of the highest performing, structurally sound run of bulls for the season.

“It is always good to work with good people and good cattle,” he said.

Sponsored by
Sign on bonuses and the flexibility to tailor contracts to fit specific regions are among some of the provisions for regionally-based doctors in a new agreement between SA Health and practitioners.
Test
A Yarra Valley winemaker will join two South Australian participants to take part in a grower collaboration project.
Test
Boarding schools have lobbied the government to change the definition of a close contact for boarders and classify boarding staff as essential workers.
Test
Several outback highways remain cut after record-breaking rains in the north of South Australia.
Test
Regional children will get a chance to connect with other children right across Australia with the expansion of a Pen Pal Club.
Test
There was a large number of cattle on offer at the Strathalbyn store cattle sale on Friday, where steers reached a top of $2510 or $5.17/kg.
Test
MURRAYLANDS firefighters gathered to form guard of honour to pay respects to fallen CFS volunteer Louise Hincks as as her body made its way back to her family in the city on Monday, January 24.
Test
Some areas across SA have received more than their annual average rainfall in one weekend, as widespread torrential rain causes localised flooding.
Test