WHAT started out as an effort to protect brumbies from slaughter has turned into a life pursuit by horse trainer Joe Hughes to help people with mental health issues. 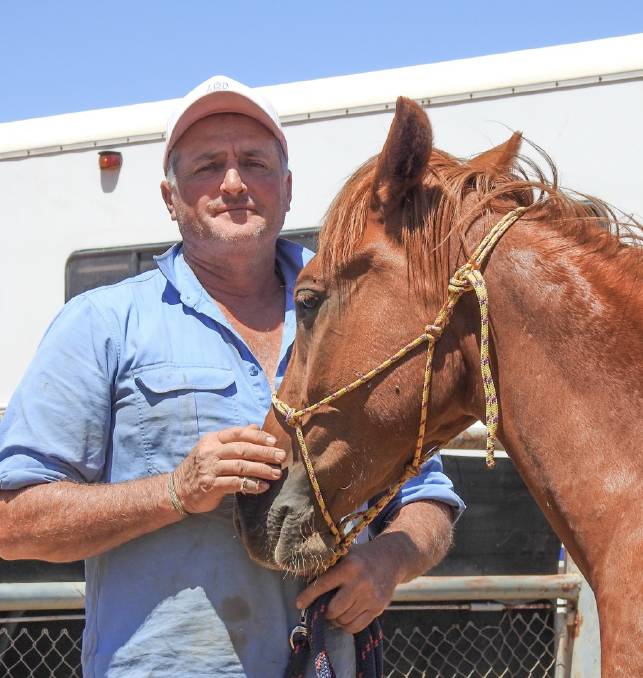 WHAT started out as protecting brumbies from slaughter has turned into a life pursuit by horse trainer Joe Hughes to help people with mental health issues.

Growing up on Wompinnie Station near Cockburn, Joe said he spent his life around horses.

“Back then, we would break in horses the traditional way, which could be very harsh,” he said.

“As a kid, I had heard you could train a horse with just a short stick, but I found that annoying as you always had to carry a stick.

“So by age 14, I decided to try training horses with just my hands and my presence.”

In his 30s, Joe had a serious motorbike accident, leaving him in a coma for three days and a broken back.

“That’s when my perspective on life changed,” he said.

“I felt an urgency to pass on everything I had ever learned about cattle work and horses to my family, my three young daughters and even my son, who was 4.5 years old at the time.

“I have never read a book on horse training or been to a clinic, everything I learned about breaking-in horses was self-taught.

“So once I was able to go home, still pretty broken, I got my family straight out into the horse arena.

“That’s when we began creating a method of training horses that even my 4.5-year-old son could do.”

Joe said they perfected that method at their Belarabon Station near Cobar in NSW for the next decade until one day, in 2016, they heard about brumbies being removed from Mount Kosciuszko National Park.

“Hundreds of brumbies were being slaughtered,” he said. “I knew I could put value into those brumbies, so we set off in the truck and picked them all up.”

Joe said they started a Facebook page so people could follow the training of the brumbies and see the value in them.

“But then people became fascinated in how quickly we were able to train a brumby, often within a few hours,” he said. “Many thought it was a hoax.

“That’s when we created 4BP – For Brumby Protection – clinics, to teach people our way of training horses and save more horses in the process.”

Horses behave similarly to humans, they can have anxiety, trauma, stresses and our method helps the trainer to address those issues in the horse. - JOE HUGHES

Joe said it wasn’t long before they started noticing the effects the horses were having on clinic participants.

“Horses behave similarly to humans, they can have anxiety, trauma, stresses and our method helps the trainer to address those issues in the horse,” he said.

“But often we were finding this training was also helping participants address those issues within themselves.

“Horses can pick up on behaviours, so we teach people that they can only train a horse by being a better person.

“In the process, you also learn anger management, conflict resolution, creating empathy for one another.”

Joe said the clinics also gave participants a sense of responsibility and achievement.

“It creates self-worth and self-belief,” he said.

“Participants also interact with one another more as they discuss their journeys with the horses.

“I once suffered from a post-traumatic stress disorder,” he said.

“Some drink, some take drugs or worse – I became an over-achieving workaholic in an attempt to deal with it.

“I used to keep ignoring it, hoping it would go away, like many I was reluctant to address it, these types of people are my target.”

They come to fix themselves with a horse. - JOE HUGHES

It was this mental health awareness that recently inspired Joe to take a new path with his training – helping at-risk indigenous youth.

“I grew up with and have worked alongside indigenous Australians my whole life,” he said.

“It pained me recently to read that five indigenous girls committed suicide in nine days. These kids are getting lost, I wanted to do something.”

“We thought why not utilise wild horses in those communities, teach these youth how to train them, reconnect them back to the spirituality of the land, while helping to give them a skill and sense of purpose at the same time,” he said.

With a mental health facilitator from indigenous employment program First Step, Joe has created the first B4R indigenous program, which he plans to trial at the NT Cattlemen's Association’s specialised training facility in Alice Springs on February 18-23.

They will use feral horses donated by remote NT community of Santa Teresa, which was in the news recently because of a mass feral horse death in the region due to extreme weather.

“We don’t want that ever happening again,” Joe said.

“So after this clinic, we plan to head to that community and work with their stockman to make better use of their wild horse population.”

The horses will be auctioned off to raise funds for the B4R clinics.