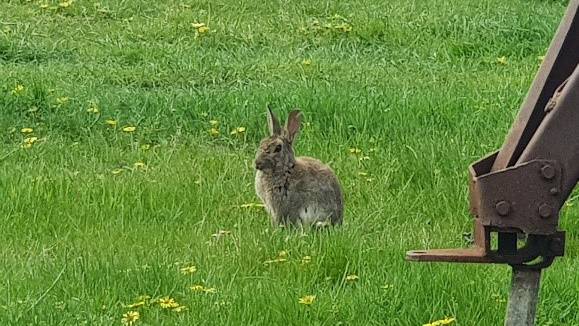 A feral European rabbit in a field on the lower Eyre Peninsula. PHOTO: Ben Tucker.

FERAL European rabbit numbers have been lower than normal at Lipson Cove on the southern Eyre Peninsula, according to one land manager involved in the release of the “new calici” RHDV1-K5 (K5) virus last year.

FERAL European rabbit numbers have been lower than normal at Lipson Cove on the southern Eyre Peninsula, according to one land manager involved in the release of the “new calici” RHDV1-K5 (K5) virus last year.

“During our pre-release spotlight count this particular property showed the highest number of rabbits of all of our release sites, so hearing that there are almost none to be seen presently is music to my ears,” he said.

“I was quietly confident as we entered the cooler months that we would observe an increase in K5 activity and a decrease in rabbit numbers. I was absolutely rapt when I received a phone call from the land manager, who was excited to tell us about what he had seen.”

Lipson Cove mixed farmer Bill Oswald said he was pleasantly surprised when he observed a significant reduction in feral rabbit population while out spotlighting for foxes on his property.

“I went out and only saw two rabbits in three hours, which across the last 10 years of spotlighting is absolutely unheard of for this area,” Mr Oswald said.

“I’m putting it down to the K5 virus that must have kicked in. I am keeping an eye out for dead rabbits so I can provide a sample to Natural Resources EP to confirm the K5 virus.

“I’m happy with the work that Natural Resources have done in delivering the K5 release on my property. The rabbit numbers, or lack of numbers more to the point, is a fantastic result. If there is a re-release or further opportunities to have help with vertebrate pest control in the future I will be the first to put my hand up.”

A re-release of the K5 virus is scheduled for later this year.