A NEW $17,000 on-property record for a Poll Dorset ram was among many highlights at the outstanding Allendale Days 46th annual sale last Friday at Bordertown. 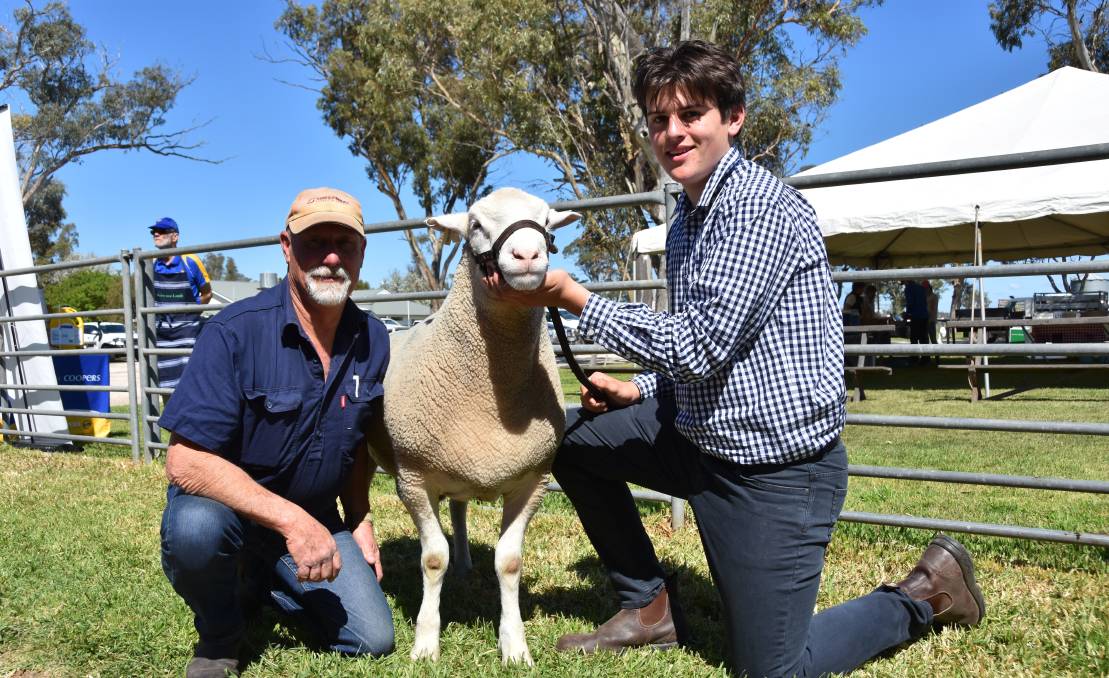 A NEW $17,000 on-property record for a Poll Dorset ram was among many highlights at the outstanding Allendale Days 46th annual sale last Friday at Bordertown.

In their largest ever offering Alastair and Jayne Day’s Allendale stud and Lachy and Lou Day’s Days Whiteface studs sold 412 of 469 rams and ewes across four different breeds for a great $1763 average.

The result from the five hour selling marathon reaffirmed their high industry standing.

Alastair said Lot 34, a June 2017 drop, came close to being retained but he had already kept two other 183 sons.

“It is the type of ram the Poll Dorset breed needs with its correctness, nice meaty top and shape with good shoulders but plenty of hindquarter and muscle,” he said.

“It was my second choice just looking at the catalogue but when I came here and saw it (Lot 34) it was head and shoulders the best one,” he said.

“It is a lovely clean faced ram, very good on its feet which we really look for, with a good carcase.”

It also had exceptional Lambplan figures with +2 for eye muscle depth and had the highest carcase plus index at 213.2.

“We keep buying Days sheep and they rarely miss with consistency they offer,” Mr Harvey said.

But it was Lot 2, Days  which made the $12,000highest price , knocked down to Kenton and Jody Farr, Harrys Well, Loxton.

They said the July 2017 drop had a great combination of pedigree and figures.

“It is a well balanced ram with a really good thick back end,” he said.

“Gordon Wood (Landmark stud stock manager) had recommended we come and look and I’m glad we did.”

The ram was sired by Days 140320, the previous reserve interbreed champion from the Melbourne Royal Show.

Lachy and Lou Day also notched up a total clearance on their White Suffolk flock rams in one of the breed’s best results seen during the selling season.

Buyers came from the Mid North to western Vic but it was Glynbrae Pastoral Co, Penshurst, Vic, who paid the $2500 top price for Lot 264.

Among the volume buyers G Durrant, Jamestown secured 12 rams for a $1950 average.

Bids came thick and fast in the first three quarters of the 111 Poll Dorset flock ram offering, reaching $2000 many times, but as demand waned there were rams available at $800.

The Day families generously donated two flock rams  –  a Poll Dorset and a White Suffolk  – to Drought Angels and the Mundulla Concert committee which is holding a fundraiser in February next year to support the Leukemia Foundation, Royal Flying Doctor Service, Breast Cancer Foundation and Prostate Cancer Foundation.

The maternal composite offering from Days Whiteface attracted a couple of new buyers but it was two repeat clients who went head to head on the top end.

Pinkerton Palm Hamlyn & Steen’s Richard Harvie bought 10 for Tony Mackereth, Padthaway, for a $1890 average, including the highest priced one at $3200.

Landmark stud stock manager Gordon Wood said it was a mammoth sale and for it to be such as success was testament to the efforts of the Day family.

“Allendale and Days Whiteface are professional stud breeders- it is their entire business and that professionalism is what brings buyers back,” he said.

“Their stud genetics go nationwide but many of their flock ram buyers are second generation buyers who keep coming back for reliable, repeatable genetics.”

Elders southern zone stud stock manager Ross Milne said it was a great result across all the different categories and quality genetics right through the catalogue.

“People are prepared to pay for a quality article and they found it here,” he said.