Photographer Alice Mabin has travelled across SA in her quest to capture and recognise the wonderful tapestry that is Australian agriculture. Whether it be aquaculture on the Yorke Peninsula, cattle on the Fleurieu or sheep in the Mid North, photographer Alice Mabin has travelled across SA in her quest to capture the essence of Australian agriculture.

What started as a jillaroo gig in outback NSW in 2007 quickly became a life immersed in agriculture for the New Zealand native.

The Drover – which followed Tom Brinkworth’s historic cattle drive from Winton to Hay, NSW – was released in 2014, followed by The Driver, which depicts the real paddock to plate story of the transport industry.

Realising how big the tapestry of agriculture was, Alice hit the road last year for The Grower series, visiting more than 550 properties.

The result is 1000 pages of beautiful pictures split between two books.

The aim for Alice was to capture the whole agricultural year from shearing and harvest to spraying weeds, cleaning troughs and fencing, though it was a challenge to keep the creativity flowing.

“You have to always be creative about how you do it to make sure everyone still owns their own style of image in the book and their own unique part of the story,” she said.

And Alice said some of the most exquisite photos are from SA.

“I did a lot of aquaculture down on the YP, I went to KI, the Fleurieu Peninsula, up through the Barossa, and the Hills, to the Flinders and beyond, so it was pretty well covered.”

“It was pretty amazing, the farmers are all incredible and what they’re into is so huge and it's fascinating to learn about.”

“I’m going to ... really focus on trying to drive careers in agriculture and bring more young people into the sector,” she said.

As a self-published author, Alice has lived on the road for the best part of five years and her travels led her back to SA last week on a promotional tour for The Grower. 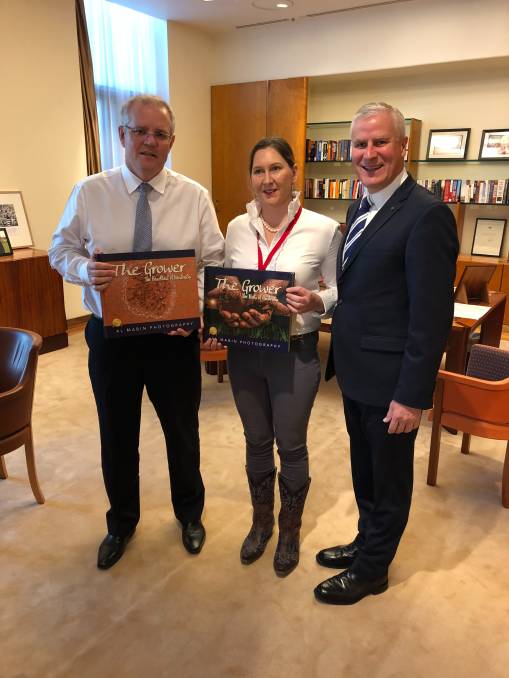 From the centre of Australia to the centre of democracy, the agricultural photography of Alice Mabin has reached the eyes of many, including Deputy Prime Minister Michael McCormick.

“I was asked to give a presentation to the Deputy Prime Minister at Parliament House and he was so impressed that he took me down to meet the Prime Minister,” Alice said.

Alice then got quite the surprise on the news a few days after the launch, with her books in the middle of the table during a drought meeting.

“That’s one coffee table you don't expect your books to end up on,” she said.

With the present drought, she said it had been great to be able to show agriculture in such a positive light.

“I’m really talking about the positive aspects of agriculture and the amazing job people are doing, the tenacity and perseverance of these people which so often goes unrecognised,” she said.

“So often people say that they really feel like a part of whatever is going on in a photo and they understand the rawness and the realness of what that represents.”