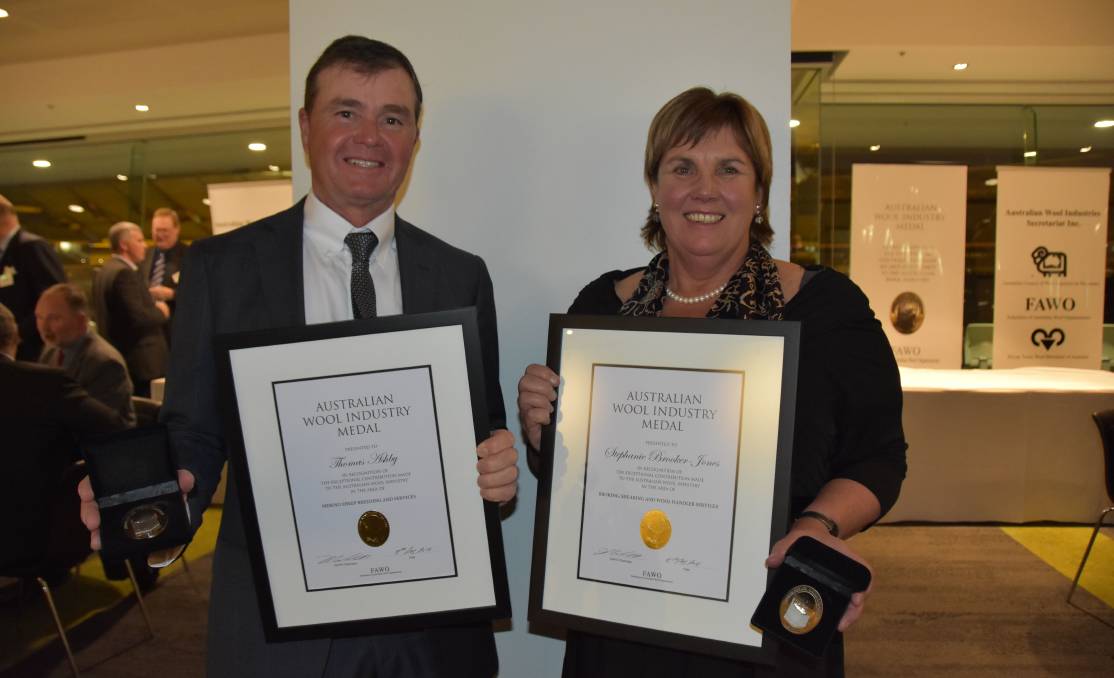 Three tireless SA wool industry volunteers have been honoured for their dedication and significant contribution to the industry with Australian Wool Industry Medal awards during Wool Week in Melbourne, Vic, last week.

The awards were presented by the Federation of Australian Wool Organisations chairman David Michell to Elders district wool manager and Sports Shear Australia secretary Steph Brooker-Jones for her work in brokering, shearing and wool handling, while Mid North stud breeder and respected judge Tom Ashby, received his for services to Merino sheep breeding.

Adelaide based broker Trevor James was unable to attend but was acknowledged for his more than 50 years in the industry, including 25 years with Landmark.

Ms Brooker-Jones has been a trailblazer for women as one of the state’s first female professional woolclassers and more recently was the state’s first district wool manager when she joined the company 14 years ago.

The well-known identity says she has enjoyed her 40 years in the industry, especially the travel around Australia but also the United Kingdom, United States and New Zealand.

‘I picked up a shearer along the way (her husband David Brooker) and a quality one at that so I have been lucky that we have been a pretty good team,” she said.

“The bonus is meeting all the friends in the sheds or the clients, many of which are pretty good mates.”

She served as Sportshear Australia chair from 2013 to 2016 and is the current secretary but has been involved with the SA branch for nearly 25 years.

She has also been an enthusiastic volunteer at young judges competition and schools for many years, encouraging the next generation into the sheep and wool industry.

“It was completely random that I chose the wool industry but I really appreciate the opportunities it has given me,” she said.

“Anyone that is interested I am keen to help.”

Ms Brooker-Jones says it has been pleasing to see growers enjoying great returns.

“I remember when we didn’t want to see a wool broker in the shed because all they were delivering was bad news and to see it turn around like 25 years later, I am just so happy to be part of it.”

Mr Ashby, who is also a life member of Merino SA, says it has been really rewarding holding industry positions.

“If people don’t stand up for their industry nothing happens,” he said.

“ I have met some many good people and had such a good insight into the whole industry.”

He says his greatest highlight has been working with clients across Australia and overseas, particularly South America, to improve their flocks while at the same time lifting the quality of their own stud flock.

“The industry is going along so well, it is just a pity there is a raging drought across about two thirds of Australia when we should be reaping the rewards.”

“We are really marketing wool to the world much better than we did in my early breeding years and the product is so much better.” he said.

Mr Ashby says it has been really rewarding working with young people coming through the industry over the past 15 years, including implementing the Breeding Leadership course in 2002 which is now a national event.

Sponsored by
A unique coastal mixed farming operation on the Lower Eyre Peninsula has hit the market and, due to conservative management practices, is likely to generate strong interest.
Test
THE high retention of crossbred ewe lambs in recent months has been labelled an "unprecedented" move by producers, according to processors that are battling to secure much-needed stock numbers.
Test
RMAC's new chairman on MoU review, and $41m industry fund.
Test
It comes after amendments were made to the government's media bargaining code legislation.
Test
ACCC chairman Rod Sims has used a major speech to reinforce the commission's priority for the mandatory fitting of rollover protection devices on quad bikes.
Test
AT GOOLAGONG'S fifth annual bull sale at Warnertown on Friday, both Angus and Santa Gertrudis bulls set stud records.
Test
Injemira Redford J006 Q287 sells for $160,000
Test
Edible insects a good example of emerging agricultural opportunities.
Test