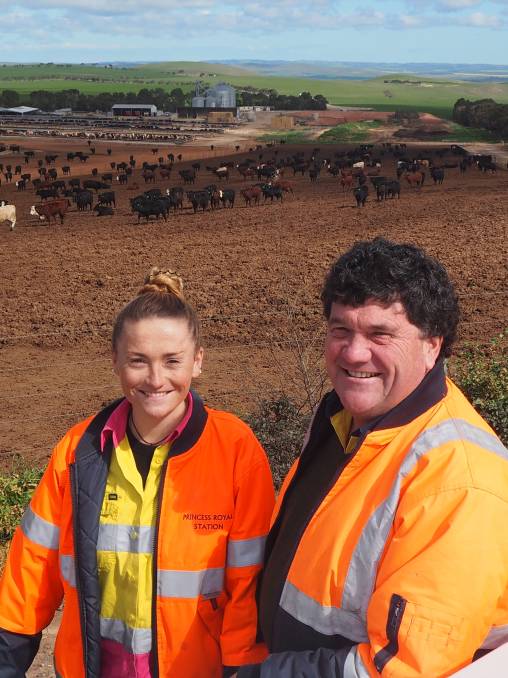 EXPANSION PUSH: Rebecca Rowe and her father Simon at Princess Royal Station's Burra feedlot, which is set to grow to a capacity of 16,500 head in the next five years.

Late last month, the Rowe family received planning approval for the expansion of the 6090-head feedlot and hoped to get the go ahead to commence construction before the end of the year.

The advanced feedlot at their Mackerode property at Burra has been operating since 2008.

The proposed expansion would see the feedlot sit on 50 hectares, which would include the present site.

Princess Royal Station major projects coordinator Rebecca Rowe said strong demand for premium Australian grainfed beef internationally was behind their plans to increase the numbers of cattle they turned off.

“Australia is exporting more and more beef and we are expecting this to continue, especially for high quality product,” she said.

“It is about being as efficient as we can without compromising quality and producing a consistent product.”

Ms Rowe is excited about the opportunity for the family business and the local community, with their staff of about 50 set to grow.

Princess Royal Feedlot, which is Meat Standards Australia and European Union-accredited, feeds cattle for a range of markets, largely for 100-115 days.

It buys cattle from across SA, Vic, southern NSW and the NT, with its feedlot entry weight 340kg to 500kg.

Last year Princess Royal Station’s beef won a silver medal in the World Steak Challenge in London, after it was entered by Teys Australia, which process significant amounts of its feedlot cattle.

This year it won bronze in the competition.

Princess Royal Station is one of the state’s farming success stories.

Since the Rowe family sold their share in major processor T&R Pastoral in 2000, they have built up more than 40,000ha around Burra.

This is run in conjunction with Wertaloona Station in the northern Flinders Ranges.

“With feedlots like ours, producers can sell their cattle without needing them to be fat or relying on the shrinking butcher trade,” he said.

“Hopefully we can have clients with the confidence to breed cattle and grow them out for us.”

“We are doing what the rural industry does and boosting the economy,” he said.

“An analysis of the benefits of feedlots by Deloitte for Meat & Livestock Australia in 2015 found a 15,000-head feedlot creates $31 million a year for the economy and flow on of 370 jobs from truck drivers to local shop owners.”

Sponsored by
Fox bait will be available for Murraylands and Riverland landholders during a series of distribution days in the next two months as part of a group baiting program.
Test
The recent severe weather and extensive flooding in the north of the state has been officially declared a Major Emergency.
Test
Stock Journal was on Kangaroo Island this week to see how fire-affected farmers were faring two years on.
Test
Yesterday's Mount Pleasant market maintained lamb prices, keeping them firm with the fortnight prior and is inline with other markets.
Test
POLL: For some heavy rain brought relief and rejoice, but for others it brought frustration as different parts of the state were impacted by the weekend's weather in different ways.
Test
AS he farewells a 45-year career as a livestock agent, Mike 'Juice' Newton says it is a nice time to hang up the boots with clients thriving and the industry at such a high point.
Test
A South Australian ghost town is today at the centre of a national emergency.
Test
TWO years on from the Cudlee Creek fire, which burnt more than 23,000 hectares of land in the Adelaide Hills, and a number of producers are still working to rebuild their operations.
Test