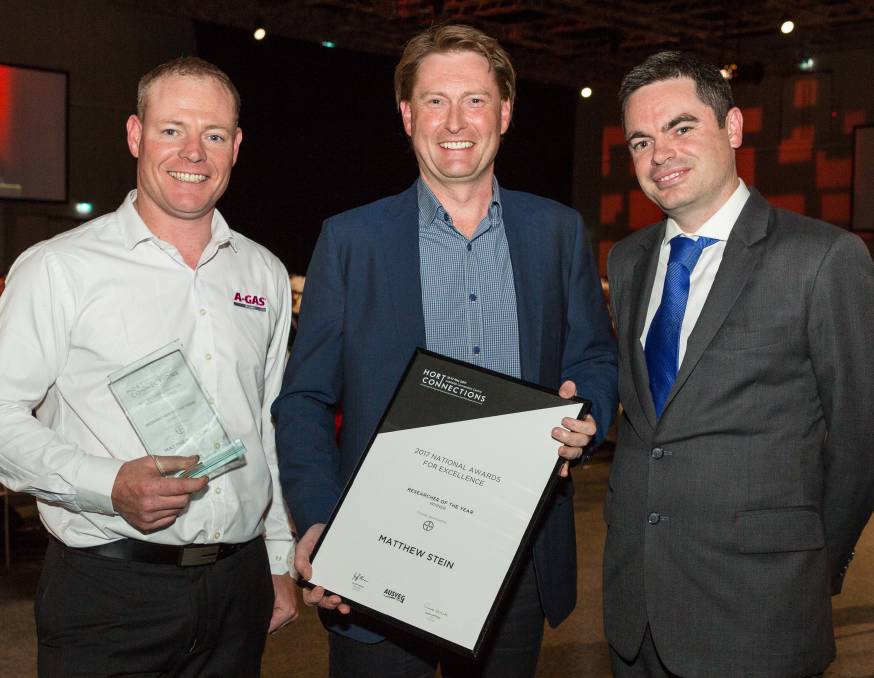 A-Gas Rural general manager Matthew Stein has been recognised as Researcher of the Year category at the Hort Connections gala dinner in Adelaide on Wednesday.

A-Gas Rural general manager Matthew Stein has been recognised at the 2017 National Awards for Excellence, taking out the Bayer-sponsored Researcher of the Year category at the Hort Connections gala dinner in Adelaide on Wednesday.

He was recognised for research into new soil fumigation technologies, leading to improved nematode (parasitic worm) and fungal controls in the greenhouse soils of the Northern Adelaide Plains.

As a result of the A-Gas Rural trials, which were undertaken in conjunction with HortEx Alliance and Braham Produce, the newly-developed suite of fumigants led to yields increasing threefold, increased protection from nematodes from 35 weeks to 48 weeks of production and significant reductions in water consumption and fertiliser use.

The coveted Researcher of the Year accolade recognises an individual or team with a track record of research or extension work that has advanced the industry, offering long-term industry benefits, and actively communicates research outcomes and encourages the uptake of outcomes on-farm.

The winner should also contribute research or extension work that advances the reputation of Australian science internationally.

Mr Stein and the A-Gas Rural team have been praised for their outstanding contributions and commitment to developing a new suite of fumigants, and in conjunction with Michael Rettke at SARDI, modifying the existing potato DNA nematode test to be applicable to the species of Southern Root Rot Nematodes in the NAP.

Using the improved DNA test, it is now possible to prescriptively apply fumigation gas agents rather than broad scale application.

Prior to this research work, chemical contractors would guess the amount of chemical required to treat a site, often leading to overdosing of soils and poor outcomes for crops and the environment.

Trials for the new fumigants took 18 months to complete at Braham Produce in the NAP and AGas Rural is already looking towards the next trials on potatoes and carrots.

Mr Stein was humbled to receive the award on behalf of the whole team.

“It’s an honour to be recognised by two of horticulture’s leading organisations, AUSVEG and PMA, and one of the world’s leading innovative crop science companies, Bayer, for our ongoing exploration into new soil gas fumigation technologies and our commitment to improving crop productivity and efficiency for Australian growers,” he said.

“One of the reasons that we are so passionate about this new suite of fumigants is that they directly affect the livelihoods of growers.

“Profits are impacted by soil health and by using these new fumigants the shelf-life of the capsicum crops in the trials was increased by five to six days, which is an enormous factor for growers who are looking to open up new markets.”