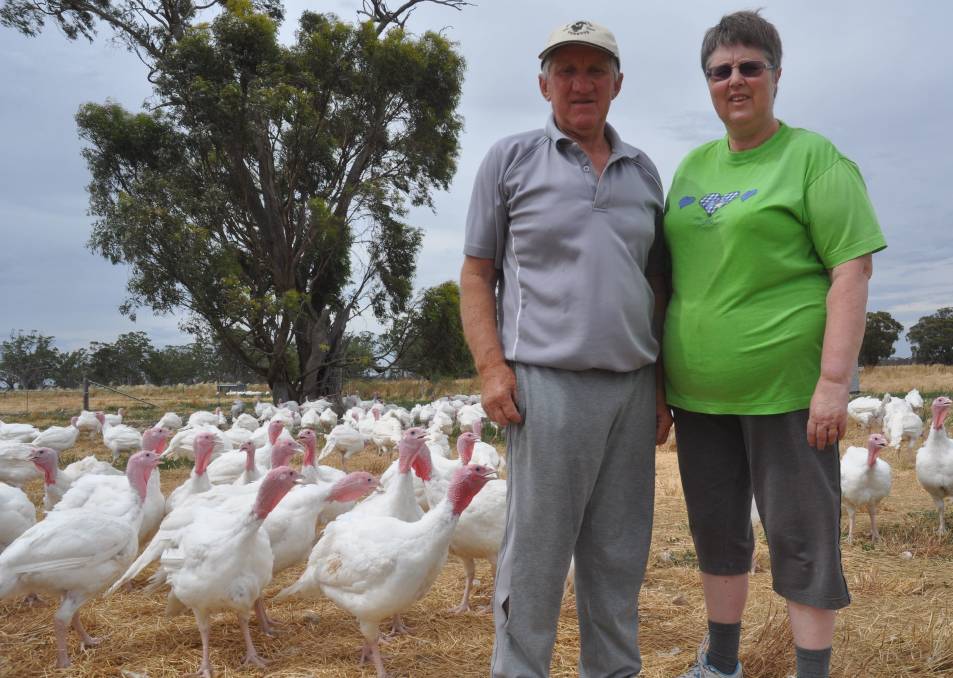 HOLIDAY FAVOURITE: John and Robyn Watson, Pooginagoric Free Range Turkeys, Bordertown, say demand for turkey during the year has surged but consumers still flock to turkey at Christmas. In the 10 days prior to the holiday they will process more than 3000 birds but have many more frozen whole birds produced earlier.

Turkey with all the trimmings remains a Christmas tradition, but with high beef and lamb prices it is finding its way to tables throughout the year.

Turkey with all the trimmings remains a Christmas tradition, but with high beef and lamb prices, consumers are gobbling down the lean meat throughout the year.

John and Robyn Watson, Pooginagoric Free Range Turkeys, say their 25th year in business has also been their biggest, with record numbers of birds sold across the country.

Mr Watson, a former shearer, says there were many skeptics about their venture near Bordertown.

But they have been proven wrong, growing from 600 birds in the first year to becoming the state’s largest turkey producer.

“We built a basic processing plant in the first year of growing turkeys and have been adding on ever since,” he said.

The Watsons are battling to keep up with demand as consumers get a taste for their turkey wings, drumsticks, schnitzels and burgers and the usual Christmas products – whole  birds, breast rolls and buffets.

“The big difference in the past few years has been the sale of the cheaper cuts,” he said.

“Everyone wants a two kilogram or 3kg turkey breast roll but then we are left with legs and trimmings to deal with.

“All other red meat is very expensive, which has made a huge difference to our sales.”

Pooginagoric Free Range Turkey is sold through many independent butchers from Darwin, Perth and Sydney to Melbourne and Adelaide.

Large volumes of the meat also finds its way into food service, with the Mount Gambier prison one of their biggest customers.

Mr Watson says the closure of Aldinga Turkeys at McLaren Flat had left a void in SA’s supply they were aiming to fill.

The Watsons, and up to eight staff, are working day and night during the festive season to finish last-minute orders, but 80 per cent of whole birds sold are frozen, having been raised earlier in the year.

“We only have a window of opportunity of 10 days to process numbers for the Christmas fresh market, which is a major challenge, especially when there is a need for different size birds from 3kg to 10kg,” he said.

“Cost is always a factor for Christmas lunch and with crayfish and seafood so expensive many people are sticking with turkey.”

Pooginagoric Free Range Turkey’s recipe for enduring success is attention to detail throughout production and a low stress system, with Mr Watson vowing consumers could taste the difference between their free-range turkeys and those raised indoors.

“Turkeys can be crazy creatures and stress easily but the furthest these travel is 500 metres in our open trailers, rather than being loaded on a truck.”

The Watsons buy day-old poults from the Ingham’s hatchery in Sydney.

At the farm, they spend the first six weeks in sheds for warmth and to avoid predation.

They then roam freely in paddocks with trees until they are slaughtered and boned out.

Mr Watson says the “perfect” whole bird size is a 4.5-6kg carcase reached at 10-12 weeks, but they process turkeys from 4-20kg in the accredited facility.

The majority of the whole birds are hens, while the males (toms) are used for portion packs.

“The females have broader breasts and better legs,” he jokes.

As in other livestock industries there has been considerable genetic gain in the turkey industry, with faster growth rates and higher proportion of breast meat.

Mr Watson says there have even been changes to structure, with birds bred with longer middle toes to handle the extra weight on their front end.

There will be no rest after Christmas with the Watsons already placing their day-old poult orders for 2017.