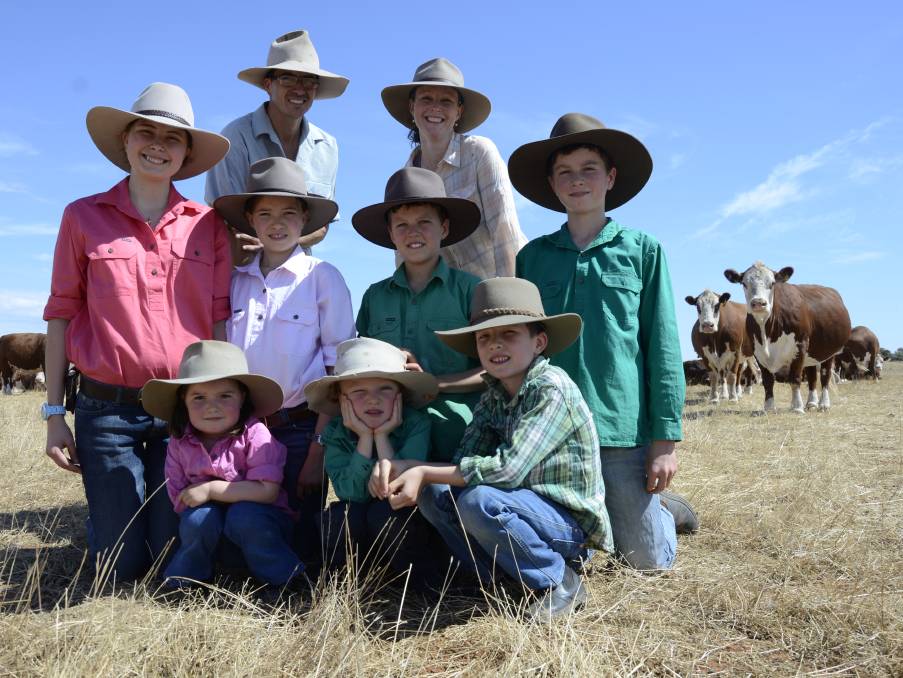 But more recently, demand for their lamb and beef has increased after the launch of their new Border Park Organics website.

Josh and Peri McIntosh crop about 800 hectares and run a 350-ewe self-replacing Merino flock and 40-breeder Poll Hereford herd at Taplan, via Loxton.

The McIntoshes moved from NSW to the Mallee in 2011 as part of a succession plan with John and Jenny Schwarz, who were looking to retire.

The 2393ha property had been certified organic since 1996 and the McIntoshes were keen to continue on the organic path.

“Peri and I both grew up on farms of a similar climate in NSW, and were keen to get back to farming, particularly organically, but hadn’t had the opportunity,” said Mr McIntosh, who formerly worked as a fitter machinist, while Peri was a speech pathologist.

“When this opportunity came up, we visited the Schwarzs on the farm. They were very welcoming and encouraging.

“After moving across and working with them for three years, they generously gave us an opportunity to start farming independently. We leased most of the farm before purchasing that land this year.” The McIntoshs took on complete management of the farm in 2014, followed by the launch of the Border Park Organics website in 2015.

“The Schwarzes had been providing smaller amounts of meat for friends, and we wanted to make it more widely available,” Mr McIntosh said.

“We started the Border Park Organics brand because of increasing demand for organic meat.

“Peri has really driven the growth of the cattle enterprise. She grew up on a mixed farm and Brahman stud near Nyngan, NSW, so she has a passion for cattle breeding and meat production.”

The McIntoshes were amazed at how quickly the brand grew.

“We greatly appreciate the team at Loxton abattoir, who do a top quality job. We couldn’t continue to provide organic meat online without them.”

It is a closed herd, with only bulls bought in for genetic diversity.

“The bulls have to be put in a quarantine paddock for three weeks before being allowed in the organic herd,” Mr McIntosh said.

“Those bulls will never be classed as organic, but their progeny born on the property will be. Genetics is the only thing we can introduce from a non-organic property. The same applies to rams.”

Calcookara rams from Cowell are used to target bare breech, while Leahcim and Gunallo rams are bought for their wool qualities.

Mr McIntosh said they kept a straight Merino flock for ease of management, a passion for wool and customer expectations.

“Our range of lamb sausages have been very popular,” he said.

“We provide lamb, hogget and mutton, along with organ meats, bones and suet.”

Beef and lamb products are sold across SA, Vic and the NT, and NSW next year.

Being a fledging business, Mr McIntosh said they were keen to keep prices at reasonable levels.

“Our goal is to make organic meat affordable for families,” he said.

“This was also Schwarzes main objective when they started direct meat sales in 2009.

“Even recently, when beef prices increased, we kept our prices about the same as we preferred to keep consistency for our customers, instead of following price trends, particularly as we try to grow the business.”

Mr McIntosh said their organic meat was a lot darker than non-organic meat because it was “slow grown and pasturefed”.

“The fat is more yellow, rather than white, which is a negative in MSA grading, but our organic clients look for these characteristics as it has a different flavour compared to grainfed meat,” he said. 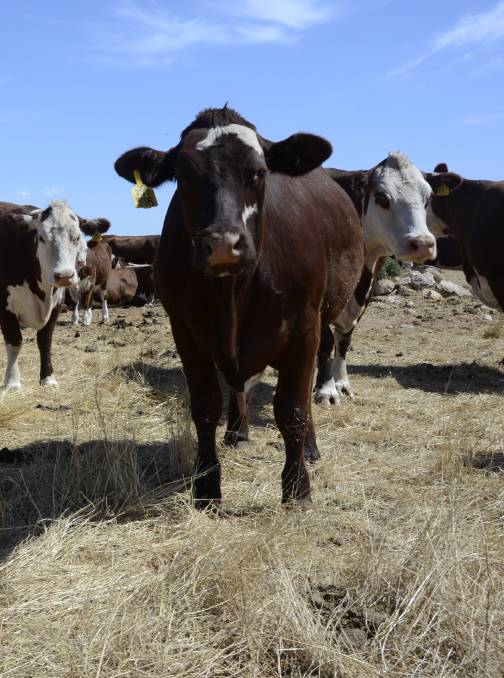 THE McIntosh family mainly use Poll Herefords in their beef operation at Taplan, but 18 months ago decided to trial a Santa Gertrudis bull from local Nangaringa stud across half their herd.

“We were looking for a cross with easy calving, early growth rates through hybrid vigour, good pasture feeding ability and a good yield,” Josh McIntosh said.

“The crossbred calves were about six weeks younger than the straight Hereford calves, but yet they caught up quickly and are all pretty well on par.

“They (Santas) have good feed conversion on natural pasture, which we need because we don’t feed grain.”

Some females may be kept to increase herd numbers, but Mr McIntosh said the Santa temperament wasn’t as placid as the Herefords.

“John Schwarz raised very quiet Herefords, so we are a bit spoiled. We may have to upgrade our yards if we want to keep breeding with Santas,” he said.

The calves weigh about 550 kilograms at present, aged 16-18 months.

As a MSA-registered property, Mr McIntosh was intrigued as to how the Santa-cross beef would cut and taste compared to the straight Hereford.

“We taste test every batch we send out under the Border Park Organics brand,” he said.

“Taste and temperament will have a lot to do with whether we continue breeding with Santas or not.

“As for growth, we are quite impressed with them.” 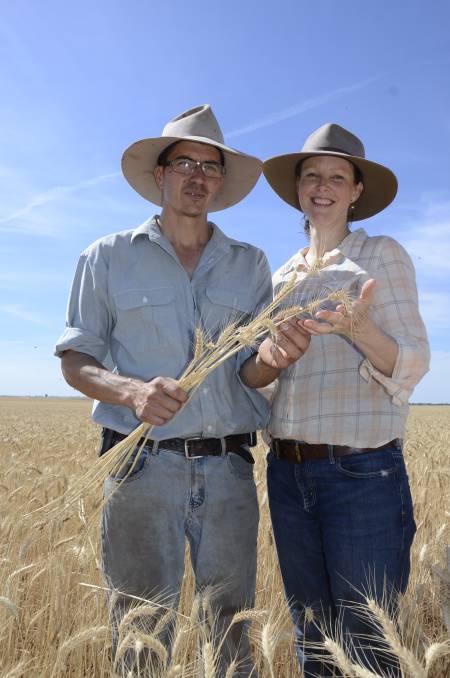 Mr McIntosh said organic grain production was unique in that weeds were not considered the enemy, but instead were essential for soil health.

“We farm on a three year rotation and we need multiple plant species growing in the off season to keep turning over nutrients, fixing nitrogen and increasing soil organic carbon,” he said.

“We need diversity for it to work.”

Soil tests are carried out every year, and natural soil conditioners including gypsum, dolomite, lime, and basalt are spread to provide minerals as indicated in the test results.

Manufactured organic fertilisers have been trialled but have not proven cost effective on all soil types.

“It appears that to get the benefit of organic inputs we would need to target soil zones with prescription mineral mixes, but we don’t yet have zoning capability,” Mr McIntosh said.

“I think growing  green manure crops and legumes to improve soil organic carbon is a better investment at this stage.”

“Thankfully our main weeds are also some of our best pasture plants,” Mr McIntosh said.

“In the second year of the rotation, the paddocks are worked immediately after rain with a heavy one-way disc plough – an International 1-6 – which integrates the weeds back in the soil, similar to a mouldboard plough moreso than a disc harrow,” he said.

“For weed control on the fallow, we use machines that don’t completely fracture the soil, such as blade ploughs and rod weeders, which cut the weed roots off under the surface while creating a seed bed.”

The rod weeder is the equivalent of spraying weeds in a no-till system, except the weeds are pulled beneath the surface and utilised for their nutrients.

Livestock are also used to control weeds, while their manure is also reworked back into the soil, providing available nutrients. ​