BUYERS attending the state’s upcoming Merino ram sales are expected to have deep pockets, reinvesting their stellar returns for meat and wool.

BUYERS attending the state’s upcoming Merino ram sales are expected to have deep pockets, reinvesting their stellar returns for meat and wool. 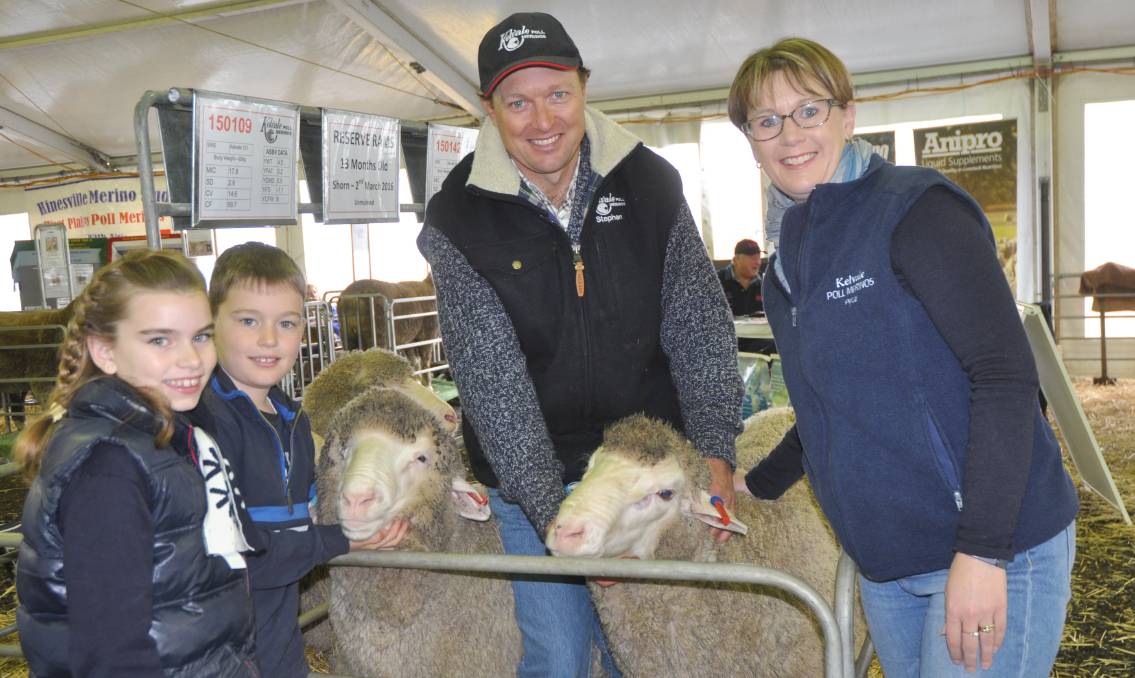 STUD PASSION: Stephen and Peta Kellock, Kelvale stud, Keith, and their children Jessica and Bradley at the Australian Sheep & Wool Show at Bendigo, Vic, where their display included rams for their sale on August 18.

Last year many Merino and Poll Merino on-property sale records were smashed with the best averages hitting a spectacular $2000 and many results ranging from $1500 to $1800.

The forecast this year is for the same, if not better, from the state’s 74 Merino sales, which kick off next week.

This should be replicated in British Breed sales, especially if the good season continues.

The wool market is trading about 10 per cent higher than the same time last year for most SA Merino fleece types and forward prices for spring are at least 100 cents a kilogram up on 2015.

Already at this week’s Australian Sheep & Wool Show in Bendigo, Vic, more than $100,000 worth of rams changed hands in six private sales.

Merino SA president Roger Fiebig is predicting another “cracker” season, especially with the “SA fleece types” edging close to 1500c/kg in the wool market and meat prices “ticking along.” He said sheep producers need to reverse the declining Merino ewe numbers and hoped it would start this year.

“Wheat prices are heading south, so it is the time to be putting a few more breeding ewes out (in the paddock),” he said. “The Merino ewe is the ultimate mother and many of the terminal lambs bred across the state are from Merino ewes. But we need to start breeding some more or they will become inaccessible.”

Mr Fiebig said the biggest crowds seen in decades at both the SA Stud Merino Expo at Burra in March and the recent EP Pre-sale Expo at Wudinna augured well for strong sales.

Interest was also high in SA sheep at the Australian Sheep & Wool Show.

Landmark stud stock manager Gordon Wood is excited about the prospects of another “outstanding ram selling season”, with a terrific vibe among the sheep industry.

“Getting across the state and further afield, SA stud breeders have again improved their sheep and the prices should hopefully reflect that,” he said.

“The EP, where we start off, has had a very good start to the season and this sets the bar of what is to come across the whole of SA.”

Mr Wood sees the potential for another modest lift in many averages, while maintaining healthy clearance rates.

“There are still plenty of commercial ewe producers looking for flock rams and getting the real benefits from buying in the top end of sales and improving their genetic gain,” he said.

The only potential hurdle may be lower ewe numbers in areas such as the Upper South East.

Mr Wood also expects the maternal and terminal breed ram sales to “sail along”, especially with the strength of lamb forward contracts.

“It doesn’t look to be a falling market so there will be enough confidence among buyers to step into it,” he said.

“Last year we all wondered what would happen when it stopped raining in July, but we still saw some good sales late.

“We don’t want to see that (a dry spring) happen for a third year but I think there is enough demand to hold the sales up and hopefully with a spring going with us, we will see stronger sales.”

Elders stud stock marketing manager Tom Penna expects Merino ram sales to be “par for the course plus a bit" after an exceptional 2015 result.

“There is no good reason why they should be any less and where some averages were behind last year, this year they will catch up,” he said. “All the ducks are lining up this season, wool is holding good ground and mutton and lamb prices are brilliant.”

Most SA studs had a similar focus breeding plain-bodied sheep with wool cutting ability and carcase traits. Studs were getting greater depth in their on-property catalogues of these types.

“Easy-doing is the emphasis but also wool cut,” he said. “They are looking for a few more fibres a square centimetre and better lock structure that will get the wool cut up.”

Mr Penna said there had been no significant reduction in ewes compared to last year but the industry remained at a “tipping point”, needing more breeders with self-replacing flocks.

Elders SA stud stock manager Tony Wetherall said the good season across much of the north of the state and Broken Hill, NSW, would spark pastoral interest, putting a solid floor in many sales and possibly pushing prices even higher.

Both Mr Penna and Mr Wetherall agreed the well-established SAMM and Dohne studs with a loyal clientele could also expect to record strong sales.

“Those commercial producers are getting very good lambing percentages and turn offs of trade lambs, so those sales will be strong for the very top end who have the numbers and product,” Mr Penna said.

Keith Merino breeder Stephen Kellock sees the sheep and wool industry as one of the shining lights in agriculture.

The Kelvale stud principal says it is great to see the optimism among commercial producers keen to breed more Merino ewes after being rewarded with excellent returns.

“A few here and there of our clients are retiring, but we have others clambering for their stock which is great to see,” he said.

“Ram sales should be fantastic. I don’t think the prices will be much more than last year, but it is about getting numbers out there into the industry.”