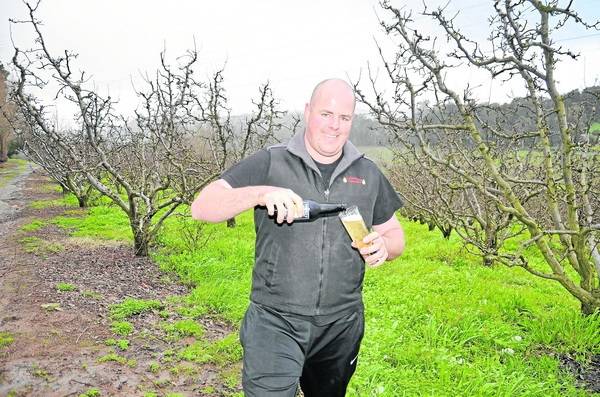 CELEBRATION TIME: Chamberlain Orchards' Damian McArdle with the new Paracombe Premium Perry at his orchard in the Adelaide Hills.

"I grow pears commercially and a friend and I just started playing around with making perry three years ago," he said.

"We started entering competitions and had some success, including winning first and second prizes at the Gawler Show.

"After experimenting more with the perry and getting good feedback from people, I decided to try and push ahead with it, and as a way of diversifying the family business."

Damian is part of the family enterprise Chamberlain Orchardsat Paracombe.

His great-grandfather Erroll established the orchard with apples and pears in 1932, and Damian's grandfather Ron and father John have also worked on the block.

"Over the different generations we phased out apples, because it was hard to compete with Lenswood," Damian said.

While fruit growing is in the blood, Damian says he has always had a strong interest in perry making.

"I just really love doing it, and am passionate about it," he said.

"The beauty of Paracombe Premium Perry is that everything can be done in-house from growing the fruit, processing it, packaging the product and selling, without using different contractors."

Applying for the Peter Olsen fellowship in 2012 was a major stepping-stone in the process of launching the brand.

As part of the fellowship, Damian travelled extensively through the UK and Europe, looking at the art of perry and cider-making.

"Before I even went overseas, the amount of media coverage I received from being awarded the fellowship just blew me away," he said.

"From that aspect alone, being awarded the fellowship was really valuable."

"I was also able to do a one-on-one training course with world renowned cider maker Peter Mitchell in the UK," he said.

"What I learned in those 4.5 days with him, along with all the knowledge I gained from the other cider and perry makers I met, has really meant the difference between making an average product and a high-quality product. It's really helped me take the product to the next level."

Damian said he would recommend undertaking a fellowship to anyone.

"It's available for anyone, to do anything, and it really can change your life," he said.

"It was a crucial stage in my journey with the perry."

Paracombe Premium Perry is made solely with fruit from the Chamberlain Orchards.

And Damian is also looking to release a cider in the near future, from fruit sourced from a nearby grower at Kersbrook.

The Perfect 5 Paracombe Premium Perry is a single variety.

"The variety used is lemon bergamot, a uniquely South Australian pear variety that isn't grown anywhere else in Australia,"he said.

"It produces a really nice fruity perry, and since it isn't grown anywhere else, I can market it as exclusively our state's perry."

The other perry is Eighty 4, which is made from five different varieties: beurre bosc, williams, red sensation, lemon bergamot and packham triumph.