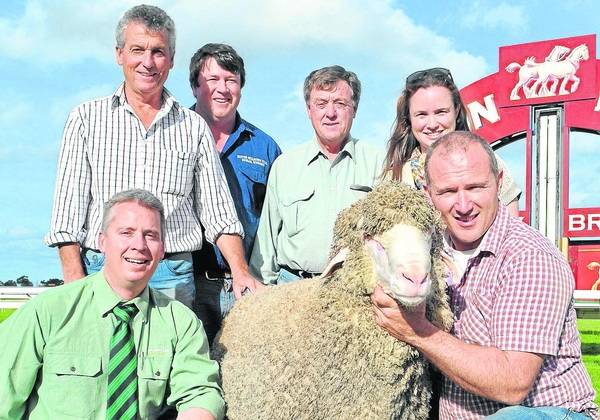 THE Classings Classic ram sale held at the Murray Bridge Racecourse on Monday was in full gallop after lot one quickly reached highs not seen in the SA Merino industry since the late 1980s.

THE Classings Classic ram sale held at the Murray Bridge Racecourse on Monday was in full gallop after lot one quickly reached highs not seen in the SA Merino industry since the late 1980s.

An opening bid of $25,000 by Will Lynch, Boorana stud, Woorndoo, Victoria, on the 18.4-micron ram from Peter and Marianne Wallis' Glenlea Park stud, Pinnaroo silenced the crowd.

It was followed by a two-way bidding duel between Mr Lynch, representing a syndicate of six studs, and Les Hamence, Pimbena Poll Merino stud, Wirrulla, who eventually bought the ram for $51,000.

This year's 130-kilogram topper had shown his growth potential early, with a weaning weight of 69 kilograms – 20kg more than the average of Glenlea Park's 2012-drops.

The ET-bred April 2012-drop was sired by Glenlea Park 004 – a ram sold in 2010 at the Classings sale to the Boorana, Pyramid Poll and Brookdale studs and out of an outstanding woolled ewe. The imposing sire had tremendous wool cut, with 6.7kg of wool from less than six month's growth.

Buyer Mr Hamence was impressed by the phenotype and genotype of the ram whose Australian Sheep Breeding Values included 14.1 yearling clean fleece weight and 7.5 yearling weight.

The sale topper's other wool measurements included a standard deviation of 2.8, 15 per cent coefficient of variation and 99.6pc comfort factor.

"He has excellent wool – nice, bright wool with the conformation you want and great figures," Mr Hamence said.

"We have not been mulesing for six years so we wanted bare breech, and both his sire and grand sire have shown these attributes."

A visibly shocked stud principal Peter Wallis said that although the ram had the fibre and frame he was aiming to breed, he did not expect such a big top price.

"We knew that he might go quite well but there is a real difference in going quite well and $51,000. We didn't see that coming at all," he said.

"Our on-property sale was also beyond what we expected to achieve this year.

"We know it won't always be that way so we are happy to take it this year."