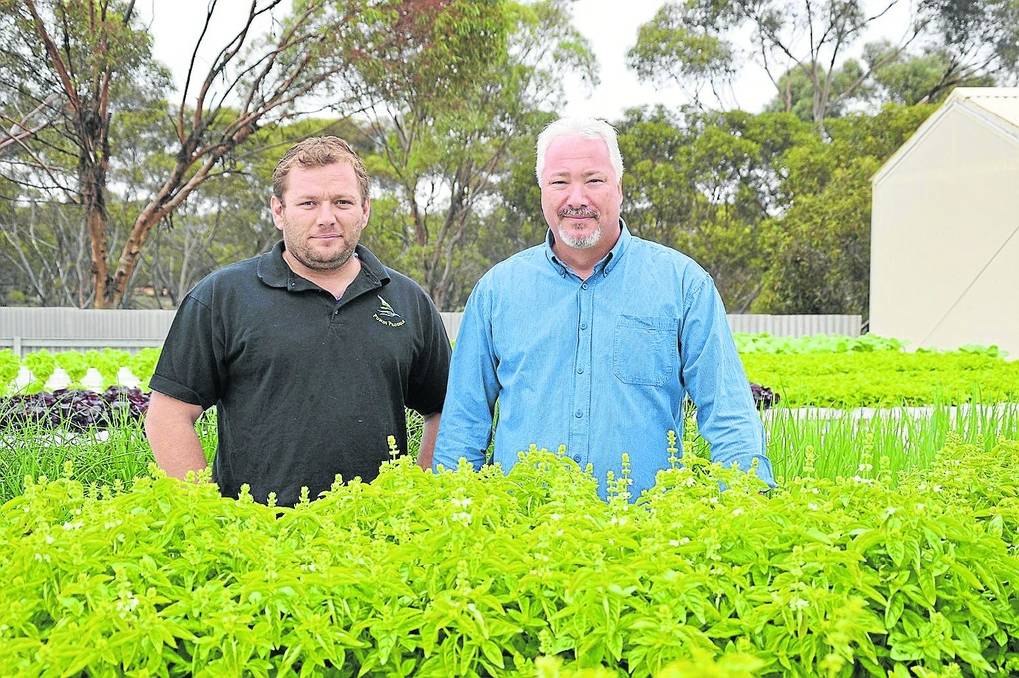 THE Riverland is renowned for its citrus and stonefruit production, but a new industry is proving ideal for the region.

THE Riverland is renowned for its citrus and stonefruit production, but a new industry is proving ideal for the region.

Aquaponics - a farming system combining the production of freshwater fish and hydroponic vegetables - results in high yields and quality with low input costs and efficient water use.

With the help of his mentor, Andrew de Dezsery from 1Aquaponics, Mr Smith began with a 3000-litre tank of silver perch and a 9 metre by 9m area of hydroponic tables. Three weeks after the fish were released into the tank, the first crop of herbs and vegetables were planted.

He has already harvested and sold basil, coriander and chives, with customers praising the shelf life, consistency and flavour of his produce and some even labelling it 'the best they've ever had'.

In addition to selling direct to the public at Riverland farmers' markets, he has been supplying home delivery service Riverland Fresh and local restaurants. He has also been value-adding by selling pesto produced using his basil crop.

Mr Smith's vegetable crops include spring onions, bok choy and various lettuces, which are all ready to harvest.

The system is based on the utilisation of nutrient-rich fish wastewater. This wastewater is high in ammonia and passes through a filtration system where bacteria converts it to nitrates, which act as a fertiliser and are taken up by the plant.

"What's growing our produce is basically a waste product of fish farming," Mr de Dezsery said. "Normally this would get thrown out because the nitrates become toxic, but here we're removing those toxins and producing food we can eat.

"Eighty per cent of the cash flow comes out of the horticulture side, and that's run on our waste product."

Trout - which thrive in cool water - have been added into a second tank to keep water nutrient levels high as perch growth slows over winter. The fish will be harvested in eight to nine months.

One of the system's biggest advantages is its efficient use of water - in Mr Smith's case, Central Irrigation Trust water straight out the River Murray.

"For a traditional crop of vegetables at, say, Virginia, we'd be looking at 36,000 litres to grow $100 of produce," Mr de Dezsery said. "Hydroponics is 600L, whereas with aquaponics it's 175L because we're reticulating that water.

"It's been calculated out that we can grow 222 tonnes a hectare, which is absolutely mind-blowing.

"We're recycling the nutrient all the time, we're not losing it. When we feed the fish, it's like putting fertiliser in, but in this case nature breaks it down and gives us the nutrient-filled water.

"The food is delivered straight to the rootzone, and it's always there, so the plant can take up whatever nutrients it needs without waiting for a fertiliser application."

In addition to its easy access to water, the Riverland is ideal for aquaponic production thanks to its low pest and disease pressure.