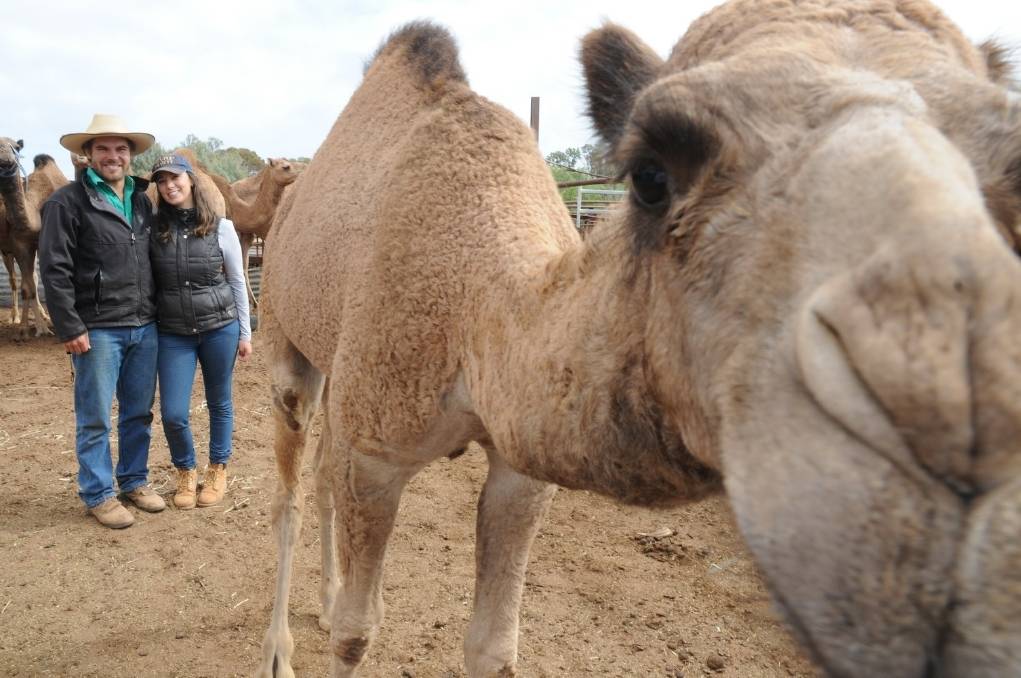 Evan Casey and Hannah Purss, Port Broughton, are waiting for their camels to calve so they can start their new camel dairy.

SA can expect a new industry to emerge in the next few months, with preparations underway for SA's first commercial camel dairy.

SOUTH Australia can expect a new industry to emerge in the next few months with preparations underway for SA's first commercial camel dairy.

Port Broughton couple Evan Casey and Hannah Purss say they have spent years setting up their enterprise and are waiting for their herd of 20 female camels - known as cows - to give birth.

Ms Purss said the original drive behind the dairy idea was to remind people of the value of the species.

"We've worked with camels for a number of years up in the NT, doing a lot of wild camel work," she said.

"There was a lot of money being spent by the government to cull camels. We were looking at ways they can be seen as more important."

They realised a dairy would be a good option and began research into the product.

"It didn't take us long to realise how special camel milk was," she said.

Ms Purss said studies from the Middle East, India and even the University of California had shown camel milk could have a positive impact on gut health. It also had a different molecular make-up to cow milk, so could be digestible for some lactose-intolerant people.

"We wanted to create a value for camels and we now have a passion for the milk," she said.

They discovered other people also had a passion for it.

"We have a huge waiting list of Australians wanting to buy camel milk," she said. "We've had quite a few enquiries from overseas, but we haven't even thought about that yet."

With a camel's gestation period between 11 and 14 months, she was expecting to start milking in the next few months.

They are using wild Dromedary camels, aged between three and 12 years, purchased from the NT.

The camels were being trained to get them comfortable near humans and having their udders handled.

"Once they give birth we will look at setting up the (milking)infrastructure," she said.

Ms Purss said camel milk had a retail price of up to $25 a litre.

Camels traditionally produced between 3-6L a day, but she is confident with training and breeding, this could be improved.

"Australian camels are traditionally from Pakistan and Afghanistan and these camels are renowned for having the best milk," she said. "The genetics are there to produce milk, we just haven't had the need yet."

Australia's first commercial camel dairy was established in WA last year, with a second started on the Sunshine Coast, Qld.

It was recently announced that a large-scale dairy could be built north of Perth.

"In the Middle East, India, the United States and Europe we're seeing a global trend of interest in the milk," he said. "The markets are real and the viability looks promising with a lot of traction."

He said Australian feral camel numbers were at about 400,000 with most in WA, NT and SA, and interest in camel farming could help in dealing with the feral population issue and climate change.

"Climate change will drive a slow change to camels in the next few decades as rainfall drops," he said. "The ongoing culling of camels is completely ignorant of the commercial opportunities."

Ms Purss and Mr Casey also believe there are plenty of opportunities with the species.

"Australia is crying out for different industries," Ms Purss said. "With droughts getting worse, camels are the ideal creatures. It seems bizarre to us that we have these animals with great meat, great milk and great wool, but people are shooting them."