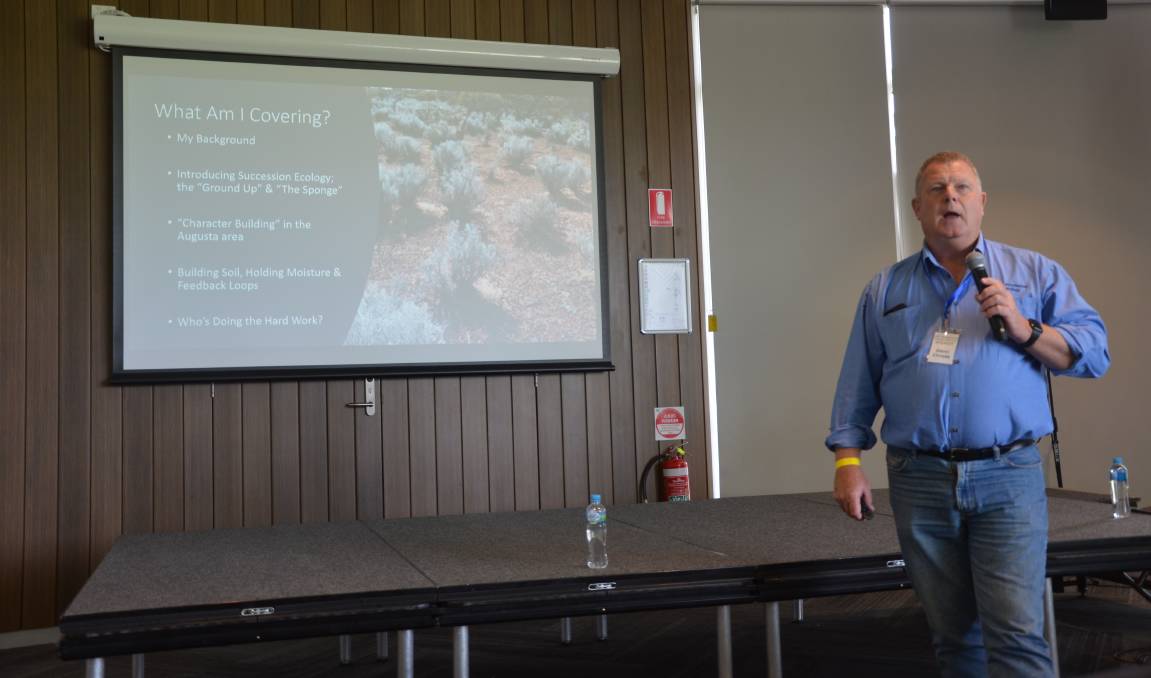 FIRST STEP: Succession Ecology director Glenn Christie, Adelaide, said an active soil filled with "critters", such as bees and wasps, was the best place to start when attempting to improve soils and therefore carrying capacity.

Revegetating land is commonly used as a method to revitalise soils and subsequently improve carrying capacity, but Succession Ecology director Glenn Christie said a 'ground up' approach was a better choice for arid areas.

Revegetating land is commonly used as a method to revitalise soils and subsequently improve carrying capacity, but Succession Ecology director Glenn Christie said a 'ground up' approach was a better choice for arid areas.

"Many people have been taught about top down revegetation, where you plant and grow something, and look after it," he said.

"But it's better to put an emphasis on building a soil first. Anything that builds a food chain and is doing the hard yards, like bees or wasps is key, so when the rain falls, the soil moisture can better sponge more moisture."

Mr Christie said all forms of moisture - including rain, dew, fog and mist - could be sponged, and as soil moisture increased, it could increase carrying capacity.

"If you've got a food chain, you've got a healthy soil, more production, better condition cattle, which are quicker to market with more weight, and are less stressed - what's that worth to you?" he said.

Establishing positive feedback loops were vital to ensure the maximum amount of soil moisture could be stored, according to Mr Christie.

"The healthier the soil, the deeper the roots penetrate, meaning healthier plants, better moisture storage within the plant and the soil, leading to more transpiration. It's a circular economy," he said.

A soil crust goes grey and stops growing in the absence of drought, but when it rains, it works for you. - GLENN CHRISTIE

The ability to store as much water as possible, and reduce water carting needs, obviously leads to savings to the hip pocket, but Mr Christie said the extent of these savings was not always fully realised.

He said the cost of buying water was just a fraction of the total funds required.

"One thousand litres of water costs about $3.80, if you're living in Port Augusta," he said. "But if you're out in a remote area, the cost of buying water is a 10th of the full price - having to hire a water cart, and a driver, and all the other factors, is another 90 per cent.

"If 450,000L of rain falls on your property, and is held on site, it can do so much work for you because it's already there and spread and stored, and it's free. But if you were carting that amount it, the overall cost to apply it would be around $4.5-million."

For those skeptical of a soil's ability to rejuvenate in arid areas, Mr Christie said existing species were accustomed to the conditions.

"A soil crust goes grey and stops growing in the absence of drought, but when it rains, it works for you," he said.

Mr Christie said a population of "unkillable" species like sandflies was often a hint as to where to start, and once an area had been chosen, looking for seed in that area was the next step.

"Find out if you have seed, and if you do, collect it, and start spreading across your property," he said.

He said ripping the soil to a depth of about 10 centimetres in areas where seed was to be spread - about 90 degrees to a prevailing wind - would maximise the likelihood of growth.

"If we could direct drill, we could reduce the seeding rate per hectare, but at the moment ripping seems to be the most cost effective way to cover the ground and start building that soil, because with direct drills, everything gets clogged," Mr Christie said.

After ripping, he recommended using a super spreader, such as a 10-tonne hopper, to spread seed at as low as 10-20 kilograms a hectare if ground preparation was completed prior.

Spreading a mixture of seed species across the land was also vital.

"Put in those ones that are tough, such as saltbush, but also put in ones that are a bit less tough, because they'll wait for rain. Arid zone species are very good at waiting and seed is no different," Mr Christie said.

"The lower your rainfall, the higher the amount, but seed costs a lot - for small volumes you can be looking at $100/kg.

"The scales that you're all working at, it has to be affordable and have a payback."