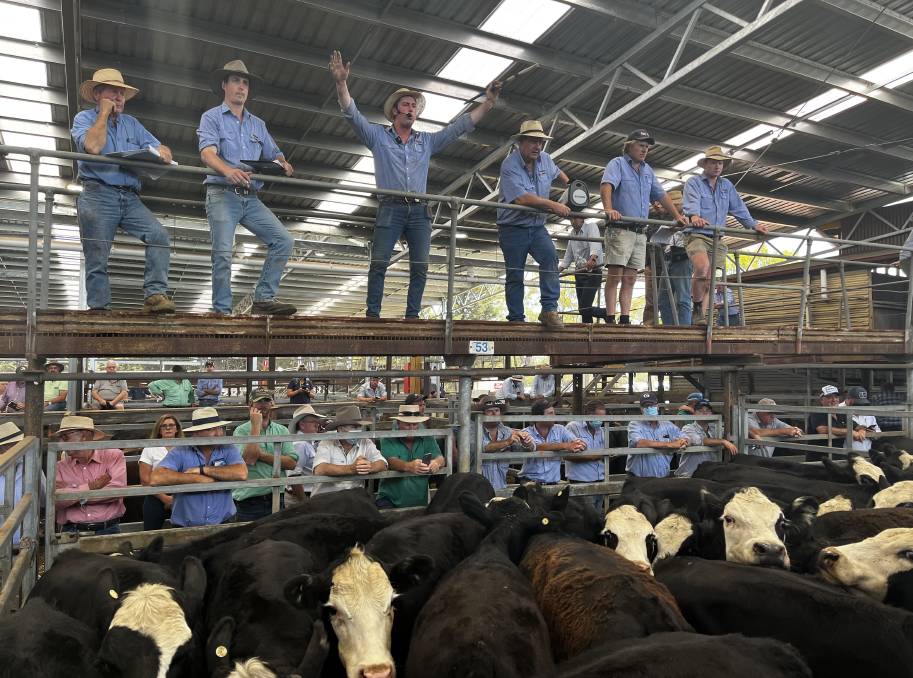 THE cattle market has kicked off the year at a scorching pace with weaner prices across the board in Victoria so far a solid $600 above the year-ago level and $800 up, in places, at Naracoorte in South Australia.

The Eastern Young Cattle Indicator's first 2022 appearance tomorrow is likely to be at another record.

Supply across the southern weaner sales, and at the handful of saleyards in NSW and Queensland that have opened for business so far, has been significantly tighter.

Demand is going in the other direction, courtesy of good rain and an abundance of feed across much of the cattle growing country in the east.

While that dynamic is at play, prices will continue to rise, agents said.

Speculation that northern buyers might be put off by the prospect of an accelerating market did not eventuate, with the majority of weaners sold in Victoria so far headed into NSW and as far as Queensland's Darling Downs.

Agents said the clear sentiment was the demand for grain-fed beef at the other end was such that lot feeders would pay strong rates when these cattle are ready to turn off.

Wodonga agent Kevin Corcoran, Corcoran Parker, said the money paid for southern weaners so far had been above pre-Christmas rates and above expectations.

"The line-up on offer has been of exceptional quality and that has combined with the widespread rainfall over Christmas - even on sale day it was bucketing out of the sky - and more pending in the north," he said.

"Year-in, year-out, northern buyers do take a lot of weaners from here but this year there is definitely an urgency about securing numbers for the longer term.

Most analysts are forecasting a plateau within the next six months and then a general trend lower in cattle prices for the rest of the year.

The trigger will be the sniff of shrinking profit margins.

Even at the current record rates for young cattle, there is money in the turn-off rates and there is certainly grass.

Many agents believe the market could afford a 10 per cent correction before people stop turning a profit at the current buy-in price.

Mecardo analyst Angus Brown said many of the backgrounders buying in Victoria at the moment had good relationships with the feedlots they supply and were confident of the end result.

Many typically wait for the big lines of well-bred cattle and were going to buy this month regardless of La Nina's work.

"It's hard to see the market continuing like this for much longer but if people thought it was going to ease significantly, they wouldn't pay these rates," Mr Brown said.

"They have months of feed in front of them they want to use and there are no signs the feedlot job will drop off soon."

Online, cattle prices during the first week of 2022 have also continued to challenge new records.

AuctionsPlus reported 'happy vendors spread from central Queensland through to the hot returns registered at the Victorian weaner sales.'

The 400kg-plus steer category online averaged $76 higher than the final sale of 2021, at $2,606 a head. Robust demand for quality feeder steers continued, with the cents-per-kilogram rate averaging 21c higher at 582c/kg live weight.

For buyers, the need to dig deeper into the pockets is likely to be a frequent occurrence during early sales, AuctionsPlus analysts said.

For all the big news in beef, sign up below to receive our Red Meat newsletter.