The year 2021 has been marked by extraordinary returns on young cattle, with prices significantly up on already high 2020 prices. 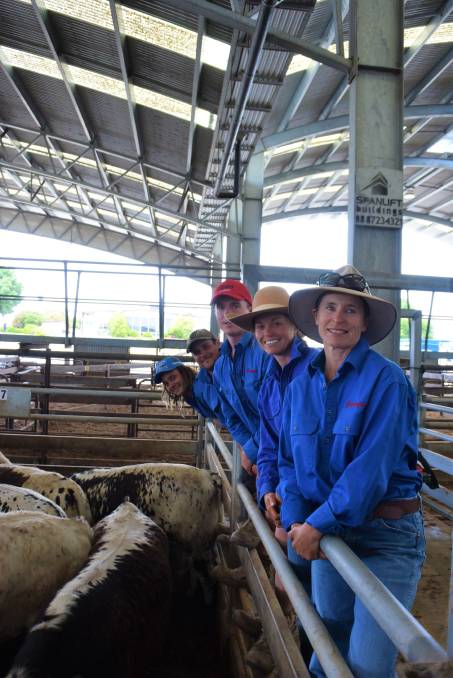 HAPPY VENDOR: Cooranga's Henry Kroemer, Nathan James, Alex and Meg Ross and Wendy James-Ross with the Speckle Park offering, which made to $2620 at the Naracoorte weaner steer sale.

The year 2021 has been marked by extraordinary returns on young cattle, with prices significantly up on already high 2020 prices.

Some stock agents are even regarding the market trends as "mind-boggling" and, as seen at recent cattle markets at Naracoorte, the value of steers is showing no sign of reducing.

"Looking at last year, steers were averaging $1671 and now it is at about $2350," he said. "That is a different of almost $700. Calves that are 40 kilograms lighter are making the same as its heavier counterpart."

Mr Maney said vendors would be more than satisfied in this year's selling climate.

He said NSW and Vic rainfall has boosted prices yet again and vendors would likely continue to benefit.

Elders Naracoorte agent Ronnie Dix said recent weaner sales in the South East had so far produced some of the best yardings in recent years.

"Commentary from buyers about weaner quality has reiterated what we have been saying throughout the season," he said.

"Despite the tricky start to the year - the calves have carried plenty of weight, (although) there has been a slight lack of bloom that SE cattle are known for though."

The impact from active large northern Vic and NSW operators on prices at the Naracoorte weaner sales has been "big"and Mr Dix said only about 30 per cent of last week's yarding remained local.

"A greater number of interstate buyers were operating," he said. "That is not unusual but it was higher than in past years.

"Most of those areas are coming off the back of five years of drought and looking to source large numbers of good quality stock. They do not have a lot of options but to buy up big at these sales."

"The Eastern Seaboard is tipped to receive more rain - that will help drive prices and it will either continue as it has been or rise again," he said.

"Just comparing the past two weaner sales at Naracoorte this year, we have seen at least a $2 a kilogram jump."

Stock agents predict prices will not fall away by much in the coming weeks but a slight correction could eventuate.

A solid 820 cattle were yarded at Naracoorte by regular Lucindale vendors Cooranga with Alec Ross saying it was difficult to not be "over the moon" with the returns.

"We were expecting good prices but the end result exceeded our expectations," he said. "The market in the past 12 months has shown that prices were going to hold up last week but we were not expecting prices to go that high."

Lighter steers from Cooranga sold well in cents a kilogram and interstate restockers were the main buyers.

The family have sold at the Naracoorte Christmas and New Year sales for decades and in the past, 50 per cent of weaners were sold in December, with the remaining sold in January.

"For the past couple of years we have sold all off the steers in December and held over a couple of hundred heifers for the sales in January," Mr Ross said.

"It was a management decision after a dry spring in the past couple of years, so we decided to offload the steers."

Cooranga will offer 150 to 200 heifers in the coming January weaner sales.

RELATED: Steers to a $2636 gain at Naracoorte