Drought forced the Daniels to look at alternative farm uses or be forced out of agriculture.

THE Millennium drought in the early 2000s forced Pinnaroo mixed farmers Paul and Tracey Daniel to look at alternative farm uses or be forced out of agriculture.

Luckily, a chance phone call by an Adelaide-based turf company looking for a more secure water resource, led to a pivot by the couple into growing lawn, alongside their 1500-hectare sheep and cropping operation growing wheat, barley and peas.

"At the time, we needed an industry that wasn't linked to agriculture, as it wasn't going so well," he said.

"The turf industry is like agriculture, but it's linked to the building industry, which brought in an income stream at a different time of year."

Mr Daniel said in the beginning however, there was some trial and error.

Turf hadn't been grown in the southern Mallee before, and in their first year (2003), the 1ha irrigated crop died.

RELATED READING:Push to get valuable SA harvest in the bin

"So we moved away from mobile water sprinklers, to buying centre pivots - a first for the farm.

In 2012, the Daniels family had an opportunity to branch out on their own, with daughter Chloe Hardie and husband Michael also becoming involved.

They began retailing their 12ha of instant lawn as The Turf Farm.

"The game plan then changed for us," Mr Daniel said.

Mr Daniel said they had five years of really good growth, expanding to the 51.5ha grown under three centre pivots the business has today.

Demand has been quite strong for quite a few years. - PAUL DANIEL

"Demand has been quite strong for quite a few years, except this year really. This year hasn't been as good, but we're not entirely not sure why," Mr Daniel said.

"But we will still sell it all, we just have to look further afield - Melbourne's market is still going strong."

Mr Hardie said turf needs a lot of topsoil, so deep sands are the preferred country to grow it on.

The grass takes between 12 and 18 months to grow, before the top 10 millimetres is harvested and the root system is left behind to regrow from.

Mr Hardie said lawn was relatively simple to grow, but the Mallee environment did have its challenges.

"Frost can be a killer, and also encourages disease, so this year we had to change our fertilising accordingly," he said.

"Our soil pH is also undesirable, about 9, when turf needs to be more about 6.5, which can give us a lot of issues with nutrient tie up."

They also prefer to keep chemical use to a minimum so an integrated pest management program helps to keep the bad bugs away. 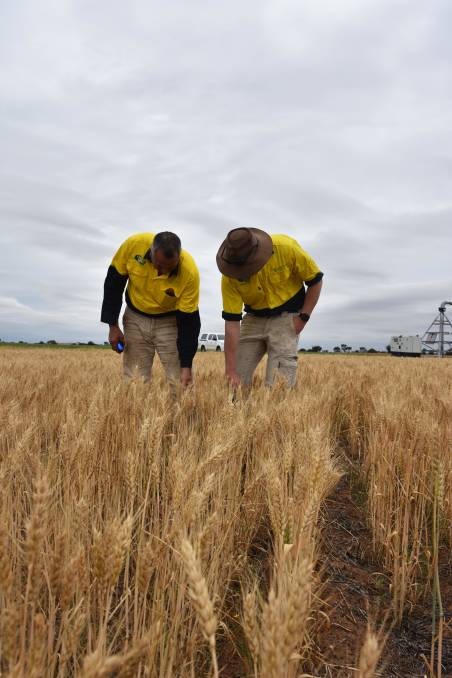 THE Turf Farm owner Paul Daniel said growing lawn had since become the major focus of their Pinnaroo farm.

Sheep were removed from the property five years ago, while 1400 hectares of wheat, barley and lentils are cropped.

The Turf Farm is only one of two businesses that have a licence to grow it in Australia.

Mr Daniel said the next generation have really taken an interest in the turf business, giving him time to refocus on the cropping side of the operation.

He said this year's season was not traveling "too well", after a ripper harvest last year.

"We will be lucky to get half of that this year," he said.

"However with grain prices the way that they are, it should boost us up to about 75 per cent of what we would normally expect."

They normally start harvest at the end of October, but have been held up by wet weather.