WOOL growing is the prime focus for a West Coast sheep operation and to cement it long-term, a producer has set up a breeding program to ensure it remains sustainable. 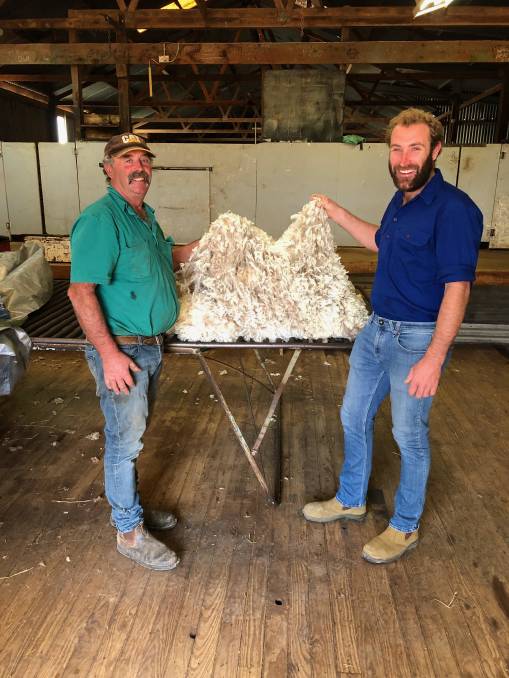 FLEECE FOCUS: Anthony Burge and his son Wayne run properties at Ceduna and Gawler Ranges that are focused on wool production.

WOOL growing is the prime focus for a West Coast sheep operation and to cement it long-term, a producer has set up a breeding program to ensure it remains sustainable.

Across three properties in some of the state's toughest conditions at Ceduna, Gawler Ranges and Cummins, Anthony Burge runs Merino ewes alongside a cropping program.

For the past 30-odd years, Mr Burge has tried a few different ways to run a wool-focused operation and he has settled on running Merino ewes to about 5.5 years old.

But a major difference, compared with a run-of-the-mill sheep operation that produces both meat and wool, is that wethers are also stocked until the same age.

"I know a lot of people probably do not agree with that but out here, it makes sense for us," Mr Burge said.

"We keep wethers on as woolcutters and we have a fair bit of hill country that is more suited to wethers than ewes.

"Basically the country is not suited to just ewes."

Mr Burge also said the largest aspect of selling wethers was getting the lambs to the correct weight and in a good year that is possible but most years, it would be selling wethers just for the "sake of it" at lighter weights.

"They do not make a premium price and we make more money off the wool," he said. "But we do use the lambs as a safety net when the season is really tight and we need cash flow."

The Burges have about 13,000 hectares at Ceduna, running about 4000 sheep and lambs - 2000 ewes are joined on that property each year in November.

At Siam Station in the Gawler Ranges, about 14,000 sheep and lambs run, including 5000 ewes also joined on November 1, while the property at Cummins grows grain across about 1400ha.

About six years ago, after using Greenfields stud, Hallett, genetics for 30 years, Mr Burge decided to begin a hogget ewe breeding program to produce rams for use at Siam Station.

The Sullivan family of Greenfields class the Burge's hogget ewes and select the top run of 50 to 100 hoggets to breed rams.

"All up, including older aged ewes, we breed rams from about 300 ewes each year," Mr Burge said.

Mr Burge said he had remained with Greenfield genetics because of the large frame and wool quality.

"Since our focus is so heavily weighed on wool production, ram selection for the traits needed to grow top yielding wool is paramount," he said. "It is a large output to source a large number of rams, so by breeding some of our own, we can offset that cost to a degree."

Shearing begins in July at Ceduna and August at Siam Station.

"At Siam, we need to be finished by September because if we get spring rain, flies are an issue,"Mr Burge said.

PREPARING young sheep for joining is key to producing a top quality lamb at the other end, according to Ceduna producer Anthony Burge.

About 20 years ago, Mr Burge acquired Siam Station in the Gawler Ranges after moving to Ceduna in 1981 from Naracoorte and in recent years, he has focused on a hogget program.

Despite running a ram breeding program from hoggets not being a new idea, Mr Burge says, he has still instilled feeding practices to make sure it is a success.

"From about mid-February, I feed oats and hay to hogget ewes that are due to lamb in the coming April to help provide a boost in nutrition," he said.

"Although they are the best hogget ewes out of the drop, they still require an extra hand in maintaining condition through lambing."

Mr Burge said so far, the additional nutrition has helped, with the quality of the tail end of the drop not far behind the tops.

"The lamb that comes from a younger ewe is good. We also have a mixed-aged line of ewes in the same program and that also helps with the ram quality," he said.

The cast-for-age ewes in the program are sold and replaced with the hoggets each year.

Mr Burge has a few local prime lamb producers that buy in the hoggets that did not make the program.