At the Yanga homestead - Mike Clancy who was the MC for the launch, Alastair Cox who commissioned the book and the author Stephen Burns.

The successful launch of the history of Yanga Station, Balranald, was achieved last weekend. 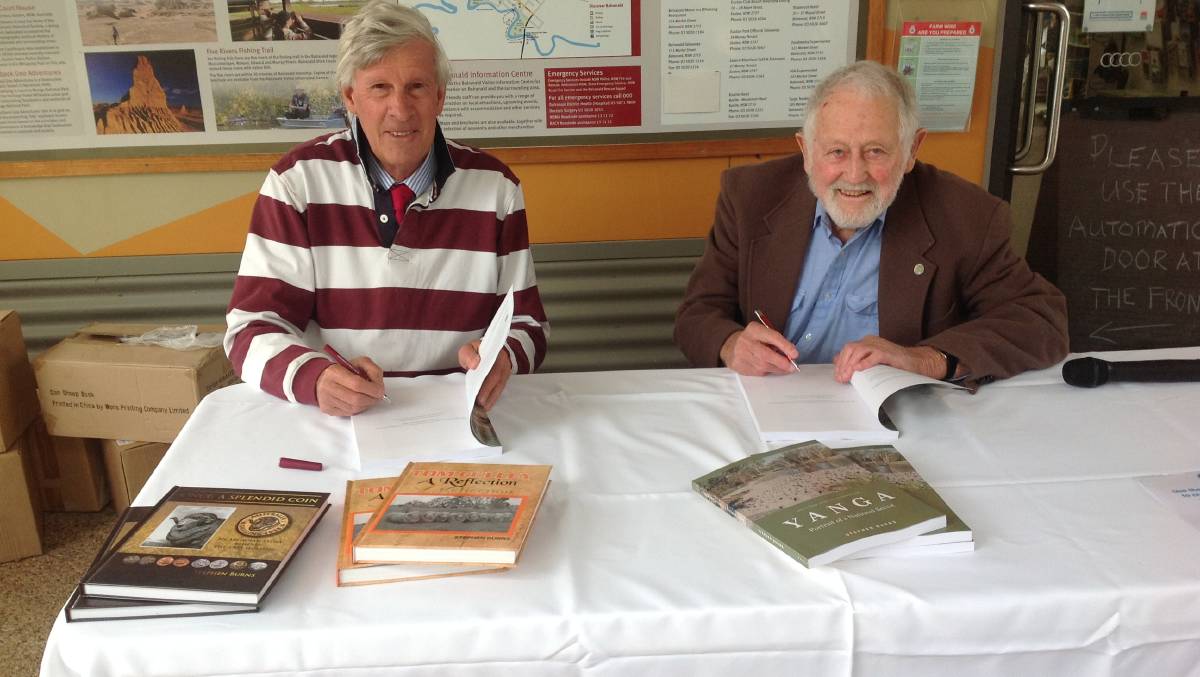 The long-held dream of Alastair Cox to record the history of one of the great pastoral stations on NSW came to fruition on the weekend with the very successful launch of Yanga - portrait of a national secret.

More than 200 friends, neighbours and Balranald residents turned out to support Alastair and his family with his project.

Among those who spoke after Mike Clancy had introduced Alastair, Jim Coady and Graeme Black complimented Alastair on a great production, with author Stephen Burns giving a brief introduction of the book.

Alastair had a long association with Yanga Station, Balranald, from the time he was overseer in 1962 until he retired as station manager in 2000.

For the past three years he has been working alongside Stephen Burns to record the pastoral history form the time of the squatters in the 1840's until it was purchased in 2005 by the NSW Department of Environment and Conservation.

With that purchase, pastoral and sawmilling activities ceased on Yanga and it was gazetted as a national park.

The pastoral history as recorded is as thorough as was possible with available archives and primary resources.

A feature of the property is the homestead, sited on a sandhill which points south into Yanga Lake and therefore has a commanding view east, south and west over the large sheet of water.

It is perhaps one of the few places in this country where you can watch the sun rise over water, and in the evening you can see the sun set over water.

At the time of writing, Yanga Lake is the fullest it has been for many years and with further flood water coming down the Lachlan and Murrumbidgee Rivers, the extent of the water level is certain to rise.

The homestead is of unique construction: made from locally milled redgum and Murray River pine, it was built around the original hut constructed in the late 1840's and completed by 1872.

During the pastoral ownership, various well known names were associated with Yanga, including WC Wentworth, CB Fisher and Sir Arthur Sims, whose descendants, members of the Black family sold the property in 2005.

With the ownership transferred into the public domain, it is hoped the property will continue to be cared for and visited by many.

The story Yanga - portrait of a national secret| Photos first appeared on The Land.