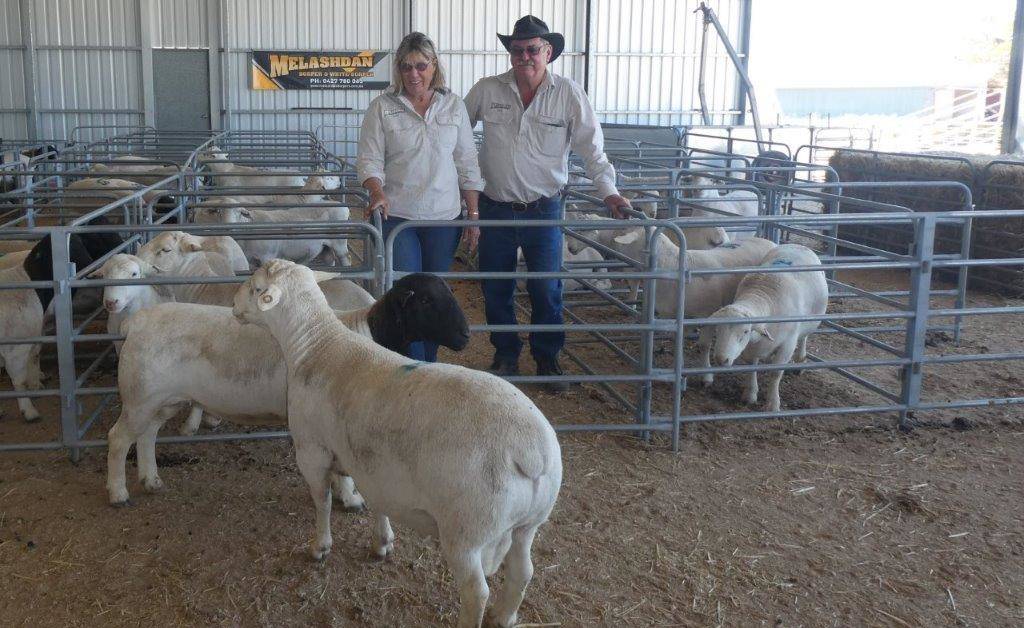 DEMAND surged for Melashdan Dorper and White Dorpers on Monday, when the Tumby Bay stud's annual ram sale reached a high of $11,600.

DEMAND surged for Melashdan Dorper and White Dorpers on Monday, when the Tumby Bay stud's annual ram sale reached a high of $11,600.

Holding an online-only auction through AuctionsPlus for the first time did not diminish returns, with the average climbing more than $2000 to $3200, and the sale top $8600 higher than 2020.

Melashdan principals Gary and Janice Fiegert sold all 89 of Dorpers and White Dorpers offered via AuctionsPlus.

"We got as much over the whole catalogue as we usually get for the top rams, so it was a great result," Mr Fiegert said.

"We had an online only sale for the first time because of the border restrictions, and demand for our rams is big in the eastern states, which showed as many went to NSW and Vic in the end."

The rams were all paddock-reared 2020-drops, and classed by Dorper Sheep Society of Australia's Wicus Cronje.

"It was classed as a stud ram by our international Dorper inspector Wicus Cronje, and had exceptional Lambplan data, with a Maternal Carcase Production of 150, so very good figures and a lot of meat and width,"Gary said.

"It is hard to find a stud classed ram that also has high figures."

An MCP of 150 put the ram in the top 1 per cent of shedding sheep for that index.

Other Australian Sheep Breeding Values for the ram included 7.6 for weaning weight, 12.2 for post-weaning weight - both in the top 10pc of the shedding breeds - along with a PW eye muscle depth of 2.2, and PW fat of -0.5 - in the top 20pc for both those traits.

The October-drop ram was one of the youngest in the sale, weighing 86kgs, with a MCP of 140. It was also classed as Type 4.

Two new clients from Wentworth who bought multiple lots were the Para Group, with seven rams, and Pomona Hill, with six.

Darren Old of BR&C Mildura, Vic, was the selling agent for the first time and said the average was about $2000 higher than last year.

"We are in a really big Dorper area in western NSW, and the demand is greater for them there so it did help us with the prices this year," he said.

"And the season, people getting over $9/kg for lamb in spring allowed them to spend more on genetics."

"They've purchased some very good rams from Burrawang stud in recent years and it is showing in the flock," he added.

The sale was conducted by BR&C Agents, Mildura, and run through AuctionsPlus.