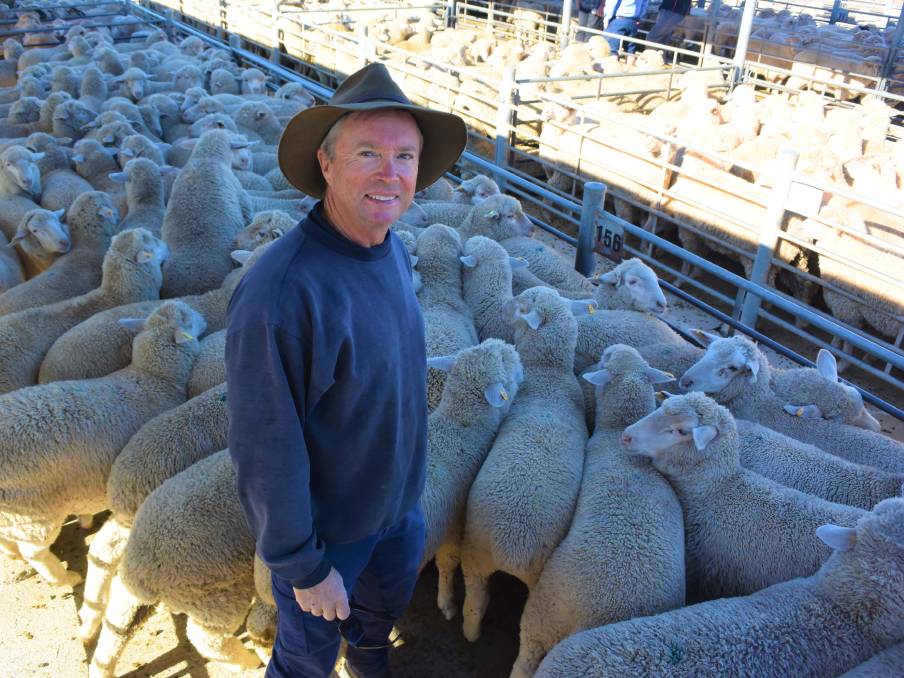 LARGE LINE: Mallala mixed-farmer Ian Jenkin offered what has become a rarity, a line of about 500 new-season crossbred lambs at South Australian Livestock Exchange at Dublin on Tuesday.

PLATEAUING lamb prices at saleyards in the past three weeks have recovered at Dublin market this week, after a large line of lambs reached $222, offering producers renewed confidence for the markets ahead.

PLATEAUING lamb prices at saleyards in the past three weeks have recovered at Dublin market this week, after a large line of lambs reached $222, offering producers renewed confidence for the markets ahead.

He said it could be a gamble some weeks but it was worth the punt if the demand was there.

"At this time of the year, lamb prices weigh even more heavily on supply and demand," he said.

"Consequently, the large numbers being offered at Bendigo, Vic, Ballarat, Vic, and Dublin will cause a bit of a lull in prices because freshness is starting to dry off."

"As lambs get a bit woolly that will hold up the bottom end," Mr Manuel said.

"I expect prices to hold but there will be further dips in the market."

Mallala mixed-farmer Ian Jenkin offered a line of about 500 crossbred lambs at Dublin this week and prices ranged from $190-$222.

The June-2020 drops were a bit younger than most new seasons offered at the market and Mr Jenkin was very happy with the $222 return for the tops.

"We have always sold at Dublin and at the market peak, to be getting greater than $8 a kilogram is just fantastic.

"We were lucky, the winter set the lambs up, we had solid rainfall so the drier spring did not effect the lambs as much. Feed is starting to drop off and that is why I have sold so many in a line."

Mr Jenkin holds lambs until the "last minute" but the trigger to sell, arrived when lambs needed to be shorn.

"I still have lambs to bring in but they will be shorn and then sold after harvest," he said.

Additional buying competition at Dublin this week was most likely one reason prices at the selling centre improved, according to Elders Dublin agent Matt Ward.

"A couple of interstate buyers returned this week as well as an exporter, that may have made a few buyers a bit nervous," he said.

RELATED: Lambs to $268 at Mount Pleasant

The market was firm to about $10 dearer compared with the past few markets but exactly why prices rose was difficult to determine, Mr Ward said.

The selling centre has been behind in prices, compared with other markets in the past few weeks, but a greater number of shorn lambs are expected to hit the market soon.

"Vendors that sold lambs earlier might shear lambs and be ready to sell again," Mr Ward said. "We are starting to see lambs from the Fleurieu Peninsula and Adelaide Hills coming in as well."

Mr Ward said larger lines of lambs were being offered by producers through online selling platforms rather than the saleyard.

"We won't get many more than 7000 lambs and price is expected to remain similar," he said.

Nutrien Ag Solutions Gawler Peter Marshal said on average prices had steadied out a bit to sit at $8.40/kg.

"A lot of plainer type lambs are coming onto the market that producers do not want to shear," he said.