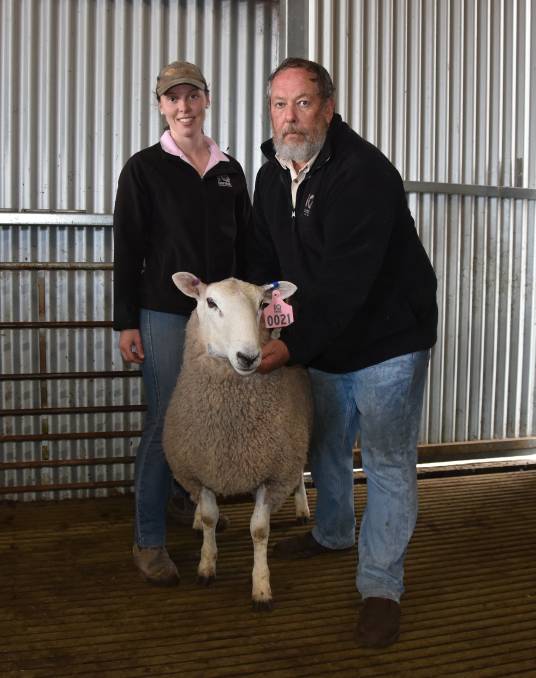 While there was a full clearance of 224 rams in the main auction, with a $20,000 top price and $3367 average, Inverbrackie principal Lynton Arney was pleased to offer a further 119 rams in buyer selection pens this year to cater to all budgets.

"Last year was an exceptional sale and so was this, but it was pleasing this year that we could offer more numbers and cater to the more price-sensitive market," Mr Arney said post-sale.

"You could see people being really selective about the rams they were wanting and we were just pleased to have rams with data to that level."

Renowned for its focus on industry-leading performance data, Inverbrackie's sale lineup boasted 48 rams ranked in the top one per cent of the breed on Lambplan across Australia and 280 in the top 10pc.

"With lamb prices the way they are, people are telling us they are seeing the value of that performance data in the progeny they are getting," Mr Arney said.

There was plenty of stud interest on the top end of the catalogue, with a new stud record set for lot 21.

The $20,000 ram was purchased for stud duty by Martin Harvey, Paxton stud, Western Flat, who also bought lot five for $5600.

Lot 17 ranked in the top 1pc on YWT, AWT, NWL and the Maternal Dollar Index and was snapped up by Warra-M Border Leicesters, Penola, for $6400.

There was a huge amount of activity on Auctions Plus, with 115 rams across the whole offering selling and averaging $2291 on the online platform.

Nutrien stud stock's Gordon Wood said while a $3300 average across 224 rams just a couple of years ago would have seemed inconceivable, the strength and bright future of first-cross ewe and ewe lamb sales meant the result was right in the "sweet spot".

"It was a fantastic result, particularly after last year when we didn't quite have the numbers for all buyers," he said.

"The unknown was whether people would come back in numbers after a bit of pain trying to purchase last year.

"With what we've seen in the industry currently with Border Leicester rams, these (Inverbrackie) rams are not out of reach for people, especially with the massive number on offer."