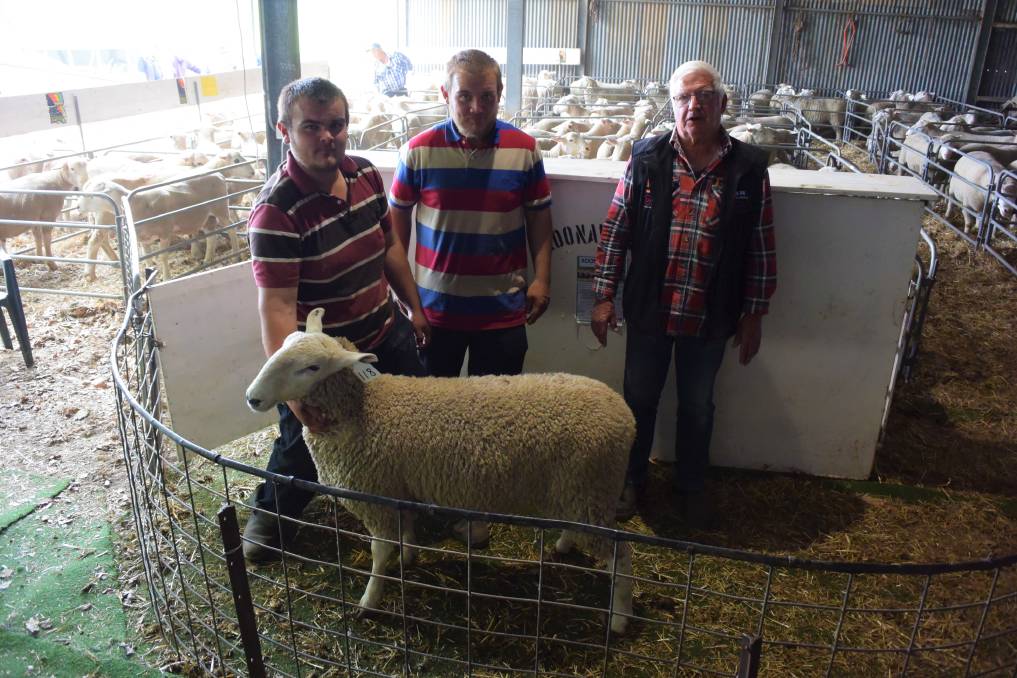 BORDER Leicester rams attracted plenty of interest at the Koonawarra on-property ram sale at Angaston on Wednesday last week with 20 of 24 sold, to a top price of $3000, averaging $1790.

BORDER Leicester rams attracted plenty of interest at the Koonawarra on-property ram sale at Angaston on Wednesday last week with 20 of 24 sold, to a top price of $3000, averaging $1790.

It was halfway through the offering that the $3000 top price Border Leicester ram was knocked down to Graham Ahrens, Lyndoch.

Sired by Coolawang C-180226,a long, well-boned ram carrying a dense fleece, with figures of a weaning weight of 5.8 with 1.4 for post-weaning fat, 1.1 post-weaning eye muscle depth and ranked 131.5 on the Border Leicester index.

Mr Ahren runs about 3000 first-cross and Poll Merino ewes on a Bangham property in the South East, managed by Alison and Gaven Thorne.

The $3000 top price ram will be joined to Poll Merino ewes to produce progeny for the Naracoorte first-cross ewe sales in November.

It is the third year Kooawarra genetics have been used in the flock and Mr Thorne said he wanted to improve lamb size.

"We want a bigger frame to help produce bigger lambs," he said.

"We want to to hit the market quicker and faster growing sheep with good frames do that," Mr Thorne said.

The twin ram was sired by Bundara Downs 181653, a ram that was noted for its high performance in the stud and winner of the trade performance class at the 2019 Royal Adelaide Show.

"The sale lacked some of the volume buyers from last year but buyers had the opportunity to secure quality rams at good value," he said.

The Poll Dorset lineup had 24 offered and three sold to $1000, averaging $1000 with the top price ram for the breed sired by Newbold 170100 and sold to RG&TA Hentschke, Mount Pleasant.

The sale was conducted by Nutrien Ag Solutions Gawler and Elders Roseworthy.