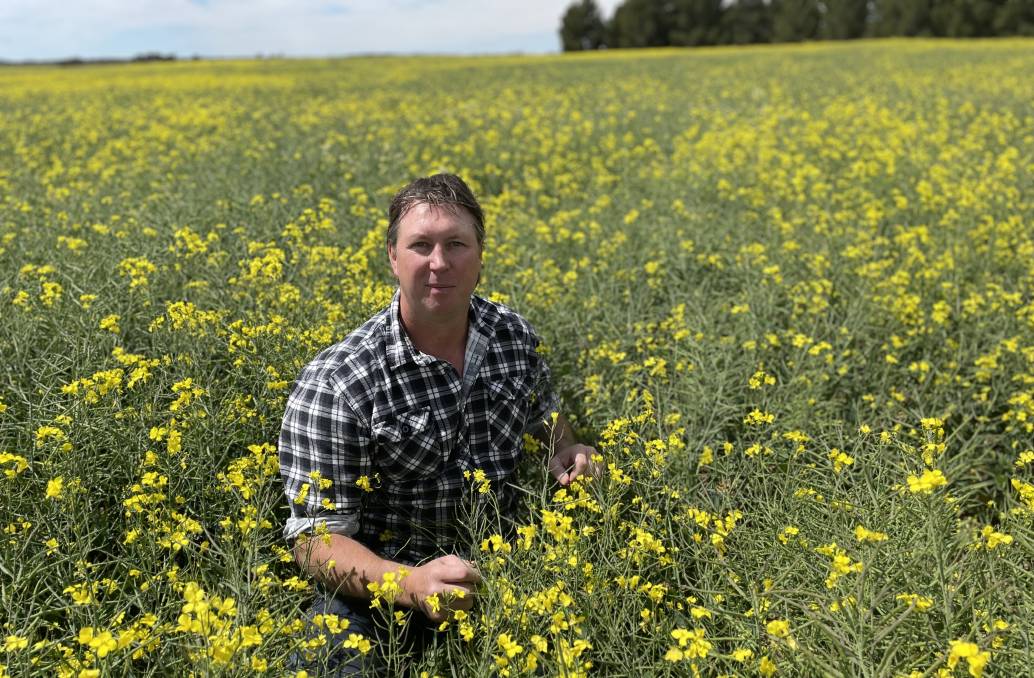 Nathan Albrecht, Antwerp, says farmers are likely to stick to existing rotations than go chips-in on canola next year, in spite of prices rising above $1000 a tonne.

Canola is riding the crest of a wave at present, but industry insiders have nominated disease and seed shortages as potential banana skins.

WHILE canola is riding the crest of a golden wave at present, industry officials are warning growers that issues such as disease and seed shortages mean it will not be all smooth sailing next year.

Australian Oilseeds Federation executive officer Nick Goddard said along with a likely dipping in price below current levels in excess of $1000 a tonne growers would also have to contend with tight supplies of seed, especially high yielding hybrid seed, next year.

"The seed companies will be busy preparing as much hybrid seed for planting when the 20222 sowing season starts as possible, but it is likely to be a lot of demand out there for the popular varieties," Mr Goddard said.

Justin Kudnig, national canola technical manager with Pacific Seeds said supplies of hybrid seed in particular were likely to be tight next season.

"We love seeing strong demand for canola seed but we need to highlight that preparing hybrid seed takes time, getting the parent varieties ready, cross-pollinating and all the things that must be done, so growers need to know there is a lag time," Mr Kudnig said.

He said ideally the seed industry would like to be getting information for the 2023 season planting intentions now.

"We realise it is difficult for growers to know exactly what is happening then but broad rotations are in place, any information helps us which helps the industry."

"By now it is too late to ramp up seed production for next year but if we see it is likely to be another big year in 2023 we can try and accommodate that."

"Farmers are increasingly becoming comfortable with getting their chemical and fertiliser needs sorted well in advance, in the seed industry we'd like to encourage them to do the same - we're like farmers - we can't just manufacture our product, it needs to grow."

Mr Goddard said, similar to this year, there would be big volumes of farmer-stored seed planted.

"Overall the total area planted to hybrids is rising but in percentage terms the hybrid area can drop in these years of high demand when the seed companies do not have enough supply to satisfy grower demand."

Mr Kudnig agreed, but added there was also strong demand for hybrids.

"Demand continues to increase for seed, there will be a lot of stored open pollinated and even hybrid seed used next year just to meet demand."

Mr Kudnig said while hybrid seed germination rates were lower, farmers were compensating with higher sowing rates and given the superior yields of hybrid varieties they were achieving better yields than with open pollinated stored seed.

"Double stacked varieties were about 10 per cent of the market last year and we only see that growing."

Mr Goddard said with the likely explosion in canola area set to continue the industry was encouraging farmers not to go to the well too many times.

"People need to realise that it is generally a riskier crop and also remember the importance of good long term rotations."

Mr Kudnig said increased plantings were generating fantastic gross margins for growers but agreed that farmers had to be disciplined to avoid running into difficulties.

"We've managed pretty good control of disease in spite of a wet spring but that has come mainly from strong fungicide programs.

"Next year, no matter what the conditions, we'd expect there will be high levels of diseases about and farmers have to be aware of that when making their planting decisions."

Nathan Albrecht, who farms at Antwerp in Victoria, said farmers would not push rotational boundaries too far.

"People know they need to stick by their rotations for the long-term good, so I don't think you'll see a lot of growers planting canola where it is not suitable, even though the price is tempting," he said.

"Farmers will lean towards canola where it is a toss-up between it and other crops if the season is favourable given where the prices are, no doubt about it, but given prices alter so much during the growing season I don't think too many will go overboard."