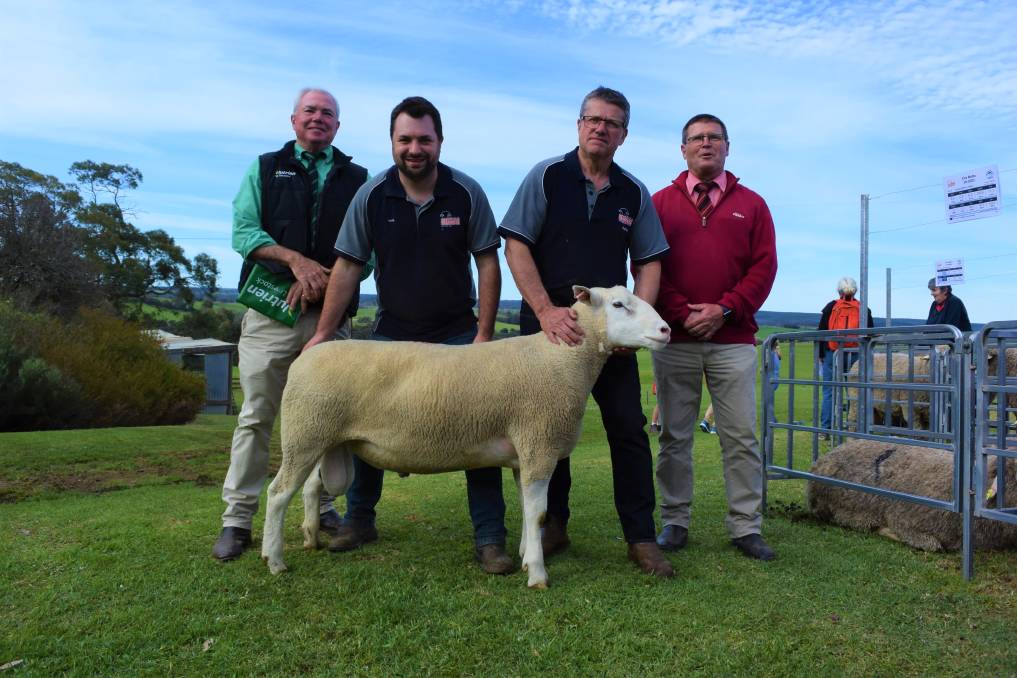 The stud had previously used Ella Matta genetics in their artificial insemination program and used an Ella Matta sire last year that performed well in the stud.

About 100 ewes will be joined to the ram in two separate matings, in December to older ewes and March to maiden ewes and stud principal James Jackson said it was the stud's depth of breeding that was attractive.

Mr Jackson has not bought a ram without viewing it before and was a bit nervous about it but was convinced that the Ella Matta genetics would stand up in the stud.

"The ram was very well-balanced and its Australian Sheep Breeding Values matched what I needed.

"It was mainly the balanced figures and low birthweight that put that ram ahead of the rest for us."

The sale volume buyer was active in the White Suffolk lineup, securing 17 rams in total to $2600, averaging $1988.

Sired by Miramoona-140012, its Australian Sheep Breeding Values provided figures of 5.8 for weaning weight, 0.5 for yearling eye muscle depth, a top 10 per cent fat depth figure of 1.2 and yearling worm egg count of -65.6pc, that was in the top 20pc of the breed.

It ranked at 155.1 on the Dual Purpose Plus index with some wool figures in the top 10pc, including -1.7 for fibre diametre coefficient of variation and 15.7 yearling staple length.

The Bells made the trip to KI in search of genetics that would help their flock continue to perform in a high rainfall environment and maintain fleece quality.

Mr Bell has been following the stud's progress that has shown good overall figures and worm count, as well as a lower breach wrinkle score, good fat and muscle.

"We are moving toward a non-mulesed sheep flock while keeping the fleece micron about 18 - so the Ella Matta genetics will help with that," he said.

The composite rams provided buyers with a plethora of potential sires and the offering reached a $5200 top price, twice, with the first ram knocked down to Andrew Fogden, Gosse, and the second to RA&AE Morris, Karatta.

He runs about 3000 composite ewes and lambs are sold mostly as stores.

"We use the ewe lambs as replacement ewes and when we get enough, the other composite ewe portion are mated to White Suffolk rams.

Ella Matta stud co-principal Jamie Heinrich said it was the stud's most even line of White Suffolk rams offered, with every ram in the top 10pc for both indexes.

"There was a lot of good value buying which was a real positive for everyone."

Stud principal Andrew Heinrich said there was some stud inquiry but mostly commercial producers were interested in securing rams this year.

"We are a commercial based stud and focused on increasing producers profitability - if stud people like our rams, that is just a bonus."