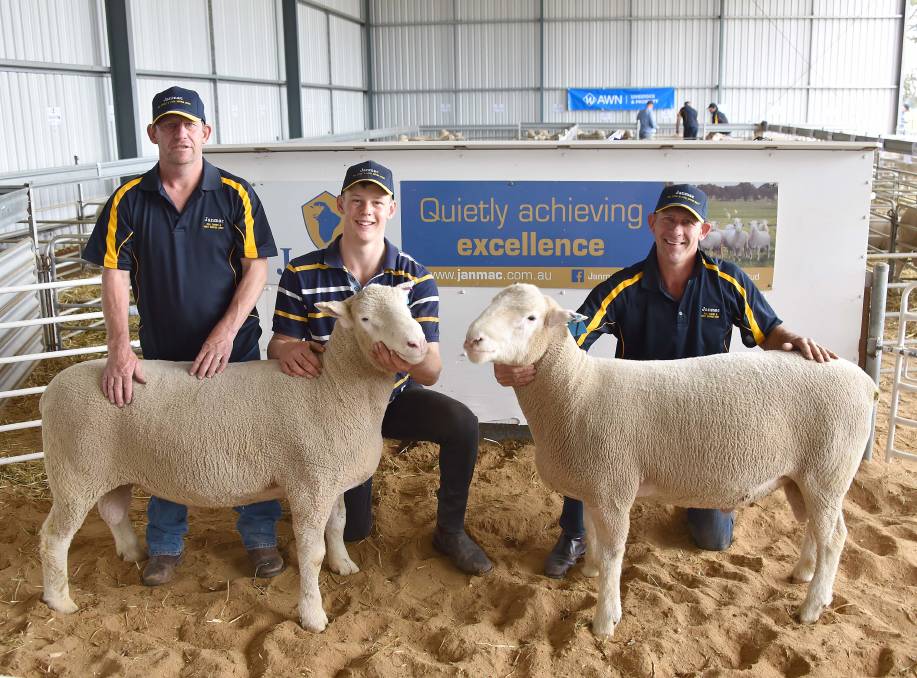 The Hausler families' 17th annual production sale at Goroke, Vic, delivered another successful sale result with a total of 174 rams selling through the ring on Wednesday last week.

The Hausler families' 17th annual production sale at Goroke, Vic, delivered another successful sale result with a total of 174 rams selling through the ring on Wednesday last week.

Competition was strong in the top end of the catalogue with the stud ram group setting the pace early, despite a last-minute border bubble change impacting the attendance of a regular group of South Australian bidders and having some impact on the day's clearance rate.

Stud principal Grant Hausler, who farms with his co-principal brother Bryce, said he was particularly pleased with the top-end stud rams with 10 of the rams going for stud use.

"We promoted them and had great results. We had an individually higher top sale last year but there were two at $7500, another at $7000 and other strong sales for the highest stud ram average we've ever had," he said.

"It was a great result to see such a consistent average for very good rams."

Mr Hausler said buyers were looking for good bone and carcass on square and deep sheep.

While Poll Dorset rams sold better, Mr Hausler described the White Suffolk group as the best they had offered to-date.

"There's no doubt the South Australian border issue coming in three days before our sale played a big part in a lower clearance," he said. "We couldn't get agents or clients over to visually inspect rams so you lose competition.

"We were absolutely rapt with the sales and most registered bidders bought, which is fantastic as it shows our regular buyers kept buying."

Two Poll Dorset rams shared the top price honours of $7500 twice and both are headed to SA.

Ian Fennell who snapped up Lot 7 said he bought the top two rams three years ago from Janmac and was happy to return.

"I couldn't get there because of the border situation but I saw them on AuctionsPlus," he said.

"Lot 7 was a solid ram with good hind quarters. Everything was good about him and I want to get a bit more weight in the lambs and I think he's the ram that will do that."

"I normally buy off Janmac and know their rams are quite good, even further down the line," he said.

"There were quite a few people there and I didn't know how I'd go but it worked out well and I bought 12 and was really happy with them. They're very good over crossbred sheep in breeding the perfect fat lamb."

Twelve Poll Dorset rams are also on their way to the Robinson family's operation at Edenhope, Vic.

Luke Stobo said it was the second year they had used Janmac.

"We were very happy with the lambs on the ground," he said. "They're good size rams and we're happy with how quickly we're able to turn lambs off."

AWN Edenhope branch manager David Hanel said there was a very good overall average despite a few lots being passed in.

"The repeat buyers stood up again and purchased rams they know are going to produce quality lambs," Mr Hanel said.

"It was a particularly good result with their Poll Dorset stud rams, including two rams at $7500. The line-up from start to finish was the usual high quality."

Mr Hanel said a lot of the top rams would be going over first-cross ewes with producers looking for quick growth for their lambs to turn off as quickly as possible at the highest possible weight.

"Janmac rams are used extensively in local prime lamb operations and they do achieve that quick growth rate and there's no problem finishing off as shorn lambs later on," he said.

The White Suffolk line-up was one of the best presented by Janmac, Mr Hanel said.

"The border restrictions imposed a few days before the auction had affected attendance rates, but Auctions Plus certainly filled the void for those who could purchase online," he said.

Grant Hausler said the AWN and Nutrien Naracoorte agents stepped up in a trying lead-up to the sale.

"A big thank you to all agents who worked with us on this sale," he said. "We appreciate their efforts and look forward to 2022".