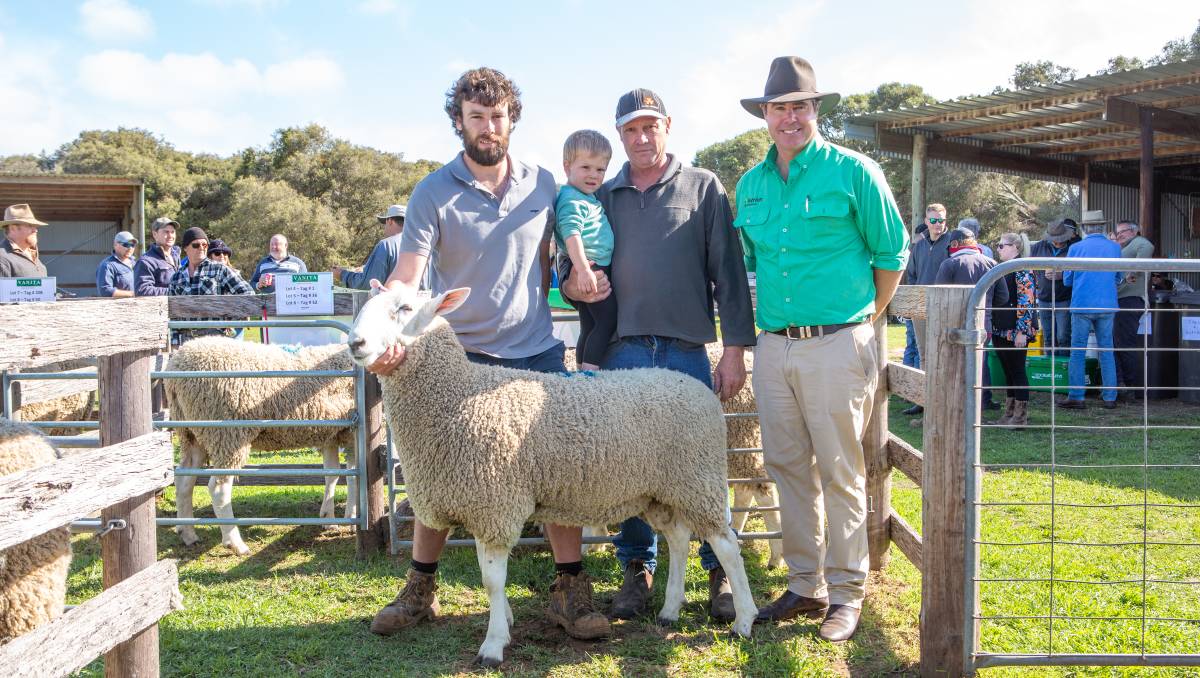 Forty potential buyers from as far afield as Jamestown and Loxton joined a large contingent of local graziers to bid on the 79 Border Leicester, 69 Poll Dorset and 35 White Suffolk rams listed in the 2021 sale catalogue with just one of these rams passed in.

It was the first time a selected line of White Suffolk rams had been offered by the Geue family.

RELATED:Border buyers bid up at Vanita

First bids were called on the first pen of three rams, two selling at $3400 to BT Ling, Mount Benson and the third going to repeat buyer, Chris Wright, Kongorong, also at $3400.

The next pen generated the most interest amongst the gallery.

There were a flurry of bids until the hammer fell at $5200 to return buyers, Delro Pastoral Co, Woolumbool. Their pick of the pen landed them with lots 4 and 5- the top price paid in the Border Leicester draft.

The Rasheed family, Boolapuckee Pastoral, Taratap bought eight Poll Dorsets from $1600 to $2400 for an average of $1600.

Over the years, the Geue family have been staunch supporters of the Royal Flying Doctor Service, annually selecting a sale ram and donating the proceeds to the charity. This year's ram- a Poll Dorset was knocked down to Philip Schaefer, Kingston at $1800.

The addition of the White Suffolk rams to the sale paid off in spades, with a full clearance of the thirty five rams on offer. DW Lind, Keith paid the top of $2400 for lot 4, a September 2020 drop ram weighing 112.5kg, with an EMD of 39 and fat depth of 8mm.

It was sired by Aylesbury Farms 8154.

Stud co-principal Nathan Geue was exceptionally happy with how the offering had lined up and the sale result.

"We thought prices might be up a bit but it's beaten all expectations, with twice more buyer registrations than last year," he said.

"Today was our best line up yet. We're always aiming for that next level, and with the addition of Glencorrie and Paxton bloodlines in the Borders and new genetics in the Poll Dorsets this year, we're seeing the results".

Nutrien stud stock auctioneer Richard Miller said the strong sale result was reward for effort for the Geue family, describing it as the most even draft he had stood over.

"They've been producing top quality sheep for a long time now and the word is obviously getting around," he said.

"There were lots of new buyers here today, backed up by a power of repeat buyers - forty registrations is well up on where we normally are and unfortunately a number of potential buyers went home empty handed.

"In terms of quality and consistency, it's as good a draft as Vanita has ever produced and I challenge anyone on phenotype to find a better draft of rams in the state".