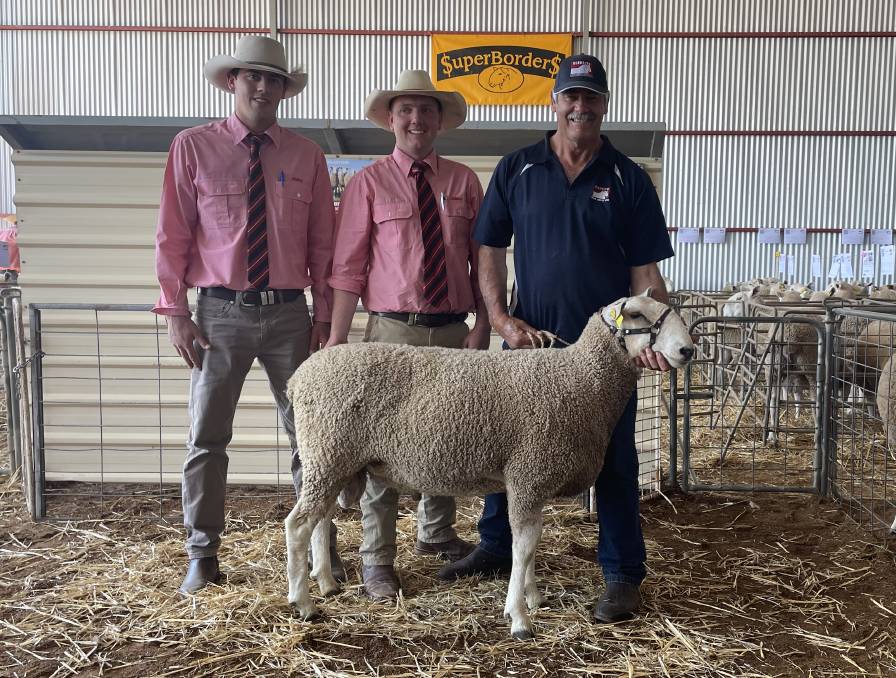 An Australian record price for a Border Leicester rams was set today during the 18th annual on-property sale for the Gleneith Border Leicester stud, Ganmain, operated since 1922 by the Kember family.

The Gleneith stud is a member of the $uperBorder$ group, which has the name branded to indicate high genetic merit for a first-cross ewe production system.

The record price at $32,500 was paid by David and Carol Jackson, and their son Ross and his wife Lydia, partners in Jackson Farming, Moyston, Victoria.

The triplet-born son of Gleneith 358-17, one of the leading sires at Gleneith and backed by a Border Leicester Cross Index (BLX) of 142.4.

Ross Jackson said their stud sheep have a lot of barrel and thickness and their new sire will add length of body to those traits.

"It is hard to find a ram with his outlook backed by such a good set of figures," he said.

"They are a very good balance of figures," Mr Jackson said.

Another twin-born son of 358-17 was bought by Phillip Russell, Tenalba stud, Canowindra, for the second top price of $7000. Mr Russell said the ram would introduce a new genetic line to his stud.

"He is a good deep bodied ram, with a good wool type and exceptional carcase with a set of breeding values in line with my aim for continual development of my stud."

The Hovell Border Leicester stud, Burrumbuttock, who added two sires at $5400 and $6000 to their genetic depth: while volume buyers included Quinn and Cruickshank, Ganmain, who bought ten rams for $3280 average and Andrew Roberts, Marrar, who selected six sires for $3967 average price.

The Gleneith bloodlines have been to the forefront of recent sheep sales in the Riverina with first-cross maiden ewes selling for $500 at the Narrandera First-cross ewe sale bred by long term client AJ Cummings, Coolamon.

They bought at the top end of the sale accumulating a draft of eight rams at $4225 average price.

The current Australian record price for new season lambs is held by the Rodham family, Uranquinty, and they purchase their first-cross ewes from Andrew Roberts.

The AuctionsPlus platform was busy with 19 rams purchased.

The sale was settled by Elders, Wagga Wagga, with Nick Gray and Harry Waters sharing the rostrum.

The story Australian Border Leicester record at Gleneith first appeared on The Land.