THE relationship between the South Australian and Uruguayan wool industry is set to be strengthened by a new business venture being established by a familiar face in the Mid North. 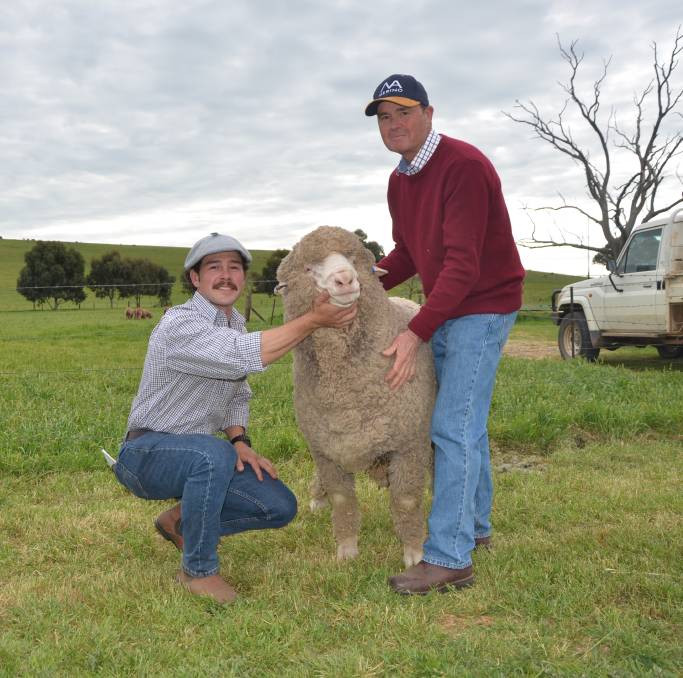 THE relationship between the South Australian and Uruguayan wool industry is set to be strengthened by a new business venture being established by a familiar face in the Mid North.

Martin Emiliano De Los Santos, who originally hails from Salto, Uruguay, has been working at the North Ashrose Merino and Poll Merino stud at Gulnare for close to two years, learning the ins and outs of the Australian wool industry from the Ashby family.

The ram will stay at North Ashrose, but semen packages will be sent to Uruguay to be marketed by Mr De Los Santos - who flew out soon after the sale - to his contacts in the Northern Uruguayan wool and Merino breeding industry.

The effervescent Uruguayan, who studied farm management and has a postgraduate degree in agribusiness, plans to eventually settle in Australia and make a yearly pilgrimage to Uruguay to visit family, as well as any clients looking for top-shelf Australian Merino genetics.

"I came to Australia to get experience and understand how Australian people work and especially in the wool industry," he said.

"Australians are the top producers in the world so I decided if I wanted to learn sheep and wool I should go to Australia.

"I'm travelling back to Uruguay with a lot of knowledge, with contacts in SA and a network in Uruguay because I was born and bred there so I know a lot of good fine wool stud breeders.

"Coming to Australia was a good opportunity and a good way to help the Uruguayan breeders get better wool."

He plans to have 500 packages sent to gauge demand.

"The only way of getting new genetics over there in the current climate is through semen," he said.

"It's going to be a win-win because the ram will still be with (North Ashrose principal) Tom (Ashby) and semen will also be available to Australian clients."

Mr De Los Santos said he bought that particular North Ashrose ram because its 16.5-micron fleece suited the Uruguayan markets, while it was also a big wool-cutter, compared with its peers.

He said without the blowflies that Australia has, much of Uruguay's wool could be sold to non-mulesed European markets, with many of those demanding fine wools.

"This ram has a very white, bright wool with the right amount of nourishment," he said.

"I was also looking for a bit finer micron because the breeders that thrive over there are in the fine wools."

It is not the first time North Ashrose genetics have headed to Uruguay. The stud's top price ram in 2016 was bought by Sant Antonio Merino stud, Salto, after being viewed at a World Merino Insight conference in Adelaide.

That occasion was the first time SA Merino genetics had gone to Uruguay since the 1980s.