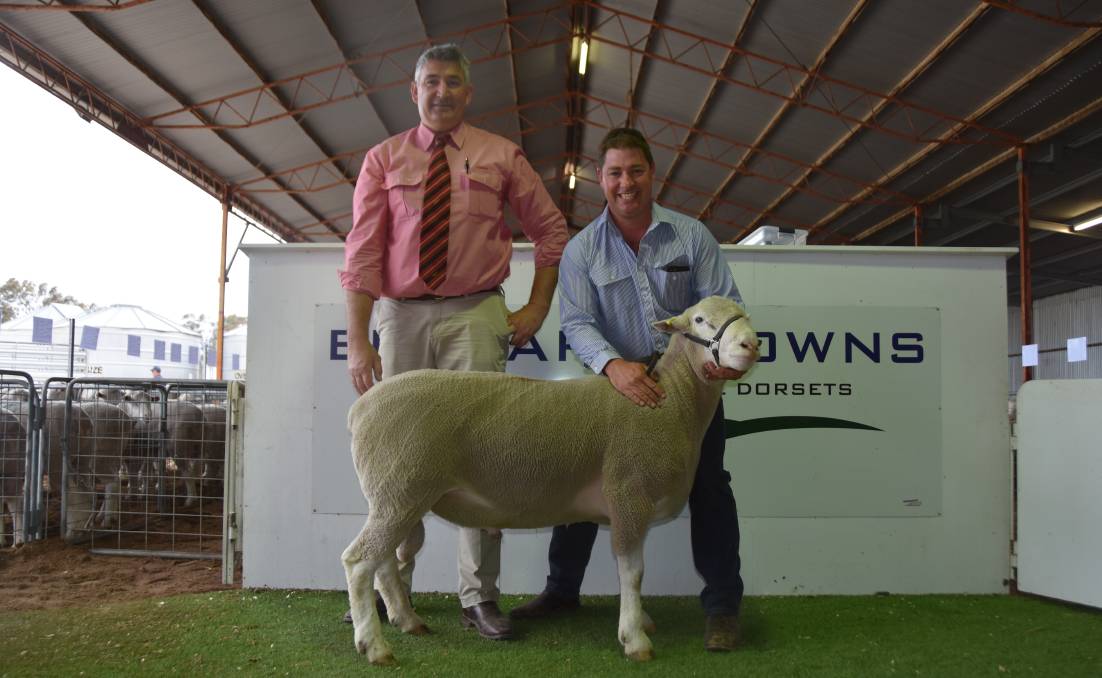 But there were plenty of gifts in the form of very affordable rams for their clients.

In one of the largest terminal sire offerings for the SA selling season, Steve, Ros, Greg and Selena Funke sold 329 White Suffolk, Poll Dorset and Suffolk rams of 374 offered for a $1316 average.

The first lot in the Poll Dorset stud offering, lot 241, made the $8250 sale high after catching the eye of buyers Scott and Emily Davidson, Morton stud, Lucindale and several others.

Mr Davidson said it was more difficult to find top stud sires this year without the Royal Adelaide Show being held but they had liked the style of Bundara Downs' sheep in previous years so decided to inspect the offering.

He said the 126.5 kilogram ram, BD205512, had impressed with its good structure and length of body as well as good Terminal Carcase Production index of 150.2.

"He is a consistent type to what we are trying to breed, smooth bodied with a clean face and a good carcase traits and the figures back that up," Mrs Davidson added.

Underbidder on the top lot, Brenton Lush, Corriedale Hills, Inman Valley, outlaid $3000 for the next lot, which was also sired by BD 181548.

The highest price White Suffolk came early in the sale at lot 2.

The April drop ram's figures included a post weaning weight of 20.5 and TCP index of 166.3.

It was fitting in the Funkes' milestone sale that the donation to the Royal Flying Doctor Service surpassed $30,000.

For the past 20 years they have donated lot 19 in their sale to the worthy cause and this year TJ&KA Pietsch, Bordertown, paid $3800 for the ram, one of the highest price White Suffolk flock rams ever sold at Bundara Downs.

"These donations are tremendous and do an enormous amount of good work. It is raising money for something everyone hopes they never have to use but helps to keep planes in the air," she said.

McBride Operations Pty Ltd were the sale's biggest White Suffolk buyer with 25 rams at the $800 base price.

The buying gallery in the stands dwindled as the sale progressed but bids continued to light up on the AuctionsPlus TV monitor.

One buyer from Wagga Wagga, NSW, who also bought in 2020's sale, secured 59 Poll Dorset rams online, mainly at the $800 base price.

There were 93 registered bidders on AuctionsPlus who had 242 bids and secured 87 lots.

McCarthy Livestock, Lucindale, was the other dominant Poll Dorset buyer with 20 head for a $970 average.

With the high clearance of the stud's Suffolks at the summer ram lamb sale in January there was a much smaller offering of these left for last week's spring sale.

For the second year in a row, Malcolm, Tania and Isabelle Smith, Stoneleigh stud, Lucindale, bought the top price Suffolk at lot 366, BD 206673

"He is a nice long ram with pretty good figures and eating quality figure (LEQ of 141.8)," Mr Smith said.

Elders southern livestock sales manager Laryn Gogel, who shared the auctioneering duties with Ronnie Dix, said they were the most consistent line-up of rams the Funkes had put up.

"You couldn't fault the product both genetically and data and then the appeal as they ran through the ring," he said.

Mr Gogel said some volume orders across both breeds helped achieve strong clearances but these buyers were in the box seat to secure "very affordable" rams.

Greg Funke said he was very proud of what the family had achieved in the past 30 years with their stud, starting withHampshire Downs to now running four breeds, the three in the sale and a new addition, Ultra Whites which are likely to be offered in 2022.

"It has been great to offer so many opportunities for our clients with different production systems to try and entertain whatever direction they would like to head to," he said.

Greg said it was very humbled to see so many clients who have been at their first sales still in the crowd each year.

"The confidence in our genetics and the partnerships we have formed with our clients has been incredible, it is amazing what it has allowed us to develop with our breeds," he said.