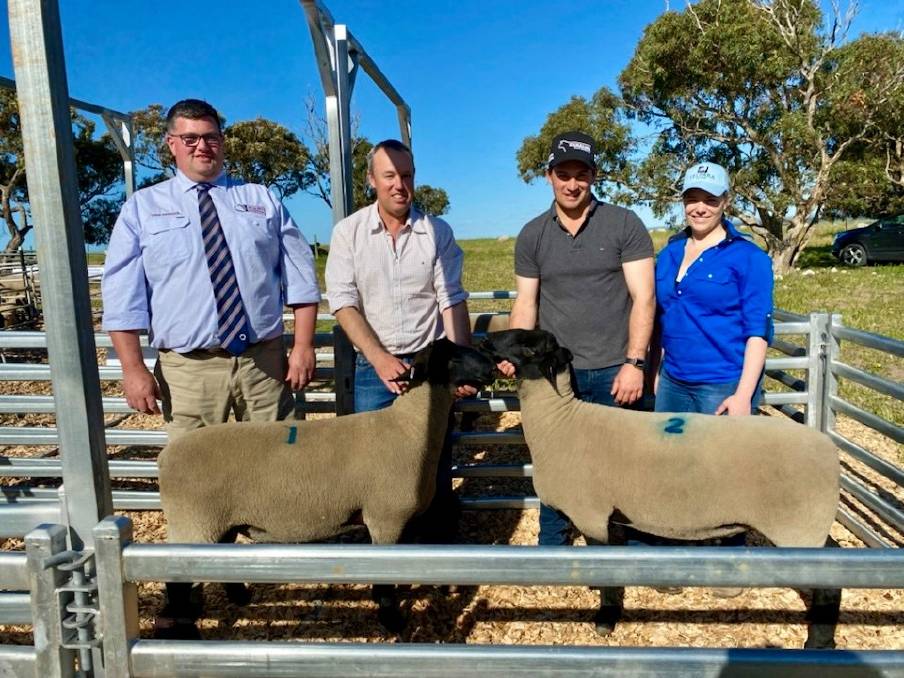 TELPARA Suffolk stud achieved a total clearance at its Hartley sale on Wednesday last week, with price increases across the board.

TELPARA Suffolk stud achieved a total clearance at its Hartley sale on Wednesday last week, with price increases across the board.

"It was an excellent sale, one of those sales that you can only sit back and enjoy because demand was fantastic from the first lot to the last lot," Telpara principal Anthony Pearce said.

It was described as an "outstanding type ram with great balance of figures, shape and temperament. Hard to find a ram with his outlook, muscle and performance all in one".

It had Australian Sheep Breeding Values of 10.94 weaning weight, post-weaning weight of 17.53 and a Terminal Carcase Production index of 142.69.

It was bought by Mark Lamborn and Tahlia Christie, Caralma Black Simmentals, Macclesfield.

The August 2020-drop ram was a twin, which was used as a ram lamb within the Telpara stud.

Mr Pearce said "you could split hairs from lot one and lot two to which was the better ram".

"They were sheep that were not only very well figured in the breed across all traits, but also outstanding rams in terms of breed type and style - nice blend of performance and sheep with eye appeal," he said.

This was an increase of $363 on last year's average, with four extra rams sold.

Picking up the top price flock ram at $2500, and averaging $1966 for its three ram purchases was Monapilla Estates, McLaren Vale.

It was purchased by Cye Travers of Loomberah, NSW.

Mr Pearce said there was strong demand from both new and repeat buyers across the sale, with all ewes selling to stud buyers.

"The rams had good numbers behind them and were good, meaty sheep - our clients liked what they saw and paid accordingly," he said.

"It was figure-orientated buying in general, and our Lambplan figures within the Suffolk breed are particularly good, which draws people - such as weaning weights, as we focus on early maturity, muscle and positive fats."