The Mulloorie stud had an outstanding ram sale result at Brinkworth on Monday. 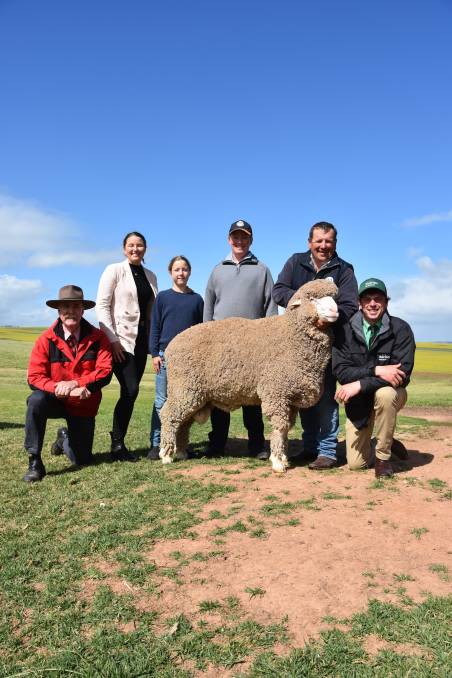 STRONG interstate, station and stud interest combined for an outstanding ram sale result for the Mulloorie stud at Brinkworth on Monday.

Not only did the Meyer family sell all 70 Merino and Poll Merino rams they had on offer, they smashed their previous sale top price and their increased sale average of $2852 was a mammoth $1077 increase on their 2020 sale.

The $14,000 sale top price at lot 5 was paid by B&D O'Keefe, Tootha Merino stud, Walgett, NSW, on AuctionsPlus, who had bought from Mulloorie years ago, but had been absent more recently due to drought.

The 116-kilogram, 22-month-old Poll Merino, sired by Mianelup Ross, had an eye muscle depth of 40 millimetres and 6.5mm fat depth. It also had a 19.9-micron wool with 3.3 standard deviation, 15.6 coefficient of variation and 99.5 per cent comfort factor.

The sale's $8800 second-highest price ram at lot 52 was bought by Avondale Station, via Broken Hill, NSW.

A long-time client, Mr Shepard said he liked lot 3 for its "wool, body shape and head".

"I was also after some rams from the 19M bracket to reduce our micron a bit and we have always bought horned rams," he said.

RELATED READING:Mulloorie offers one of its "best lineups" at annual auction

Hurtlegrove bought three Merinos, averaging $4400, which will be used to breed their own rams.

There were 25 buyers registered for the sale, with 20 home with rams, while another four operated online from Vic and NSW.

Mulloorie stud principal Paul Meyer said it was great to see many buyers return after some tough years in drought.

"They've been able to finally get some sheep back on their country and back in the market," he said.

Mr Meyer said they were hoping for a small rise in sale average, after focusing more on marketing this year, but was "blown away" by the result.

"It had very good wool, structure and underline, which both these rams have," he said.

"They will be put over 100 young Ashrose-blood stud ewes at Mutooroo to breed our own rams."

Elders and Nutrien conducted the sale.