Interfacing with AuctionsPlus for the first time this year certainly paid dividends for Moorundie Park at its ninth on-property sale at Gulnare on Friday, with an online bidder from Victoria securing the top price ram at $8000. 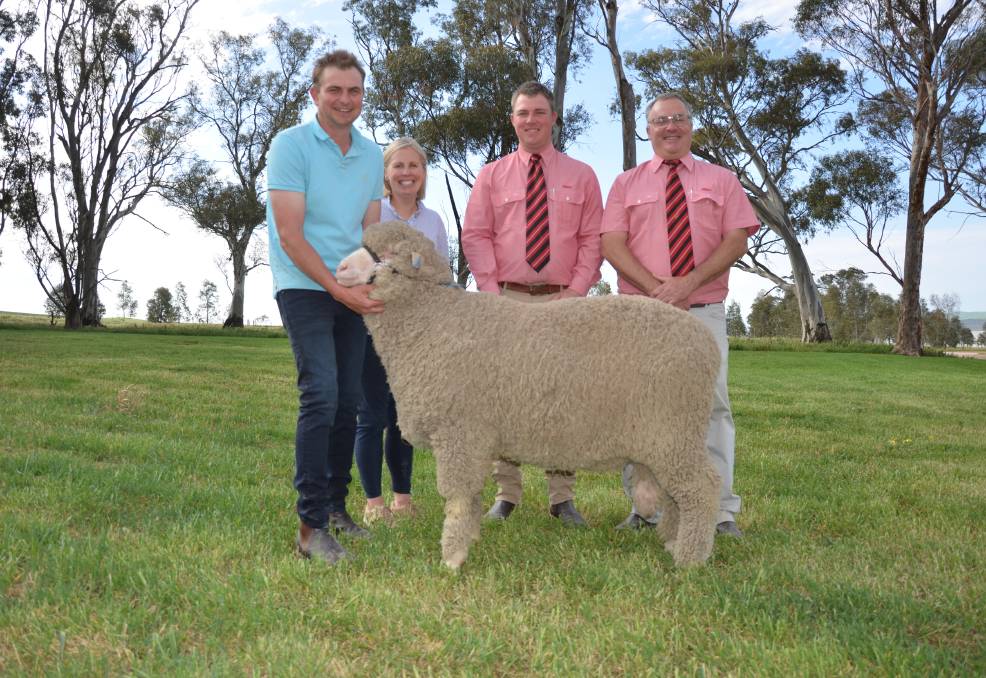 Interfacing with AuctionsPlus for the first time this year certainly paid dividends for Moorundie Park at its ninth on-property sale at Gulnare on Friday, with an online bidder from Victoria securing the top price ram at $8000.

"(The ram) has beautiful white free-flowing wool, and has such a presence and body shape," Mr Bennett said.

"It was such a modern sheep, with great back end shape and a lovely barrel, we think he will breed us some beautiful ewes."

Weighing 119 kilograms, the 15-month-old sale-topper had an 18.3 micron fleece with 2.7 standard deviation, 14.8 coefficient of variation and 99.9 per cent comfort factor, with a 43.6 millimetre eye muscle depth and 6.4mm fat depth.

It was knocked down to MG&PM Blight, Narrogin, WA, at $6500 with phone bidding carried out by Miles Cockington, Elders.

Moorundie Park stud principal Tom Davidson was extremely pleased with the sale result, which followed the private sale of a $60,000 ram the previous week.

"The catalogue had great depth and that was represented by the good sale result, and everyone left with what they wanted," he said.

"Using AuctionsPlus was really successful this year, it's probably going to be a permanent fixture for us now because it opens us up to the entire country."

Rams were sold to clients throughout SA, as well as to buyers in Vic, NSW, and WA.

Mr Davidson said the stud continued to hone in on what was important to his clients, including early maturity, constitution, and good staple length.

Eight rams were knocked down to Annerley Props, Geranium, topping at $3400 and averaging $2900, while McCarthy and Partners, Jamestown, secured seven rams to $3000, averaging $2386.

Elders conducted the sale, with Damien Webb and Ben Finch handling the gavel.

"It was a fantastic offering of rams, the rams here are always great quality and met with loyal clientele," Mr Webb said.

"There was solid strength right through to the end of the sale, and good underbidding right until the last lot."