Glen Devon stud broke its top price record of $8000 with this year's top of $14500 at its annual on-property ram sale at Two Wells on Monday. 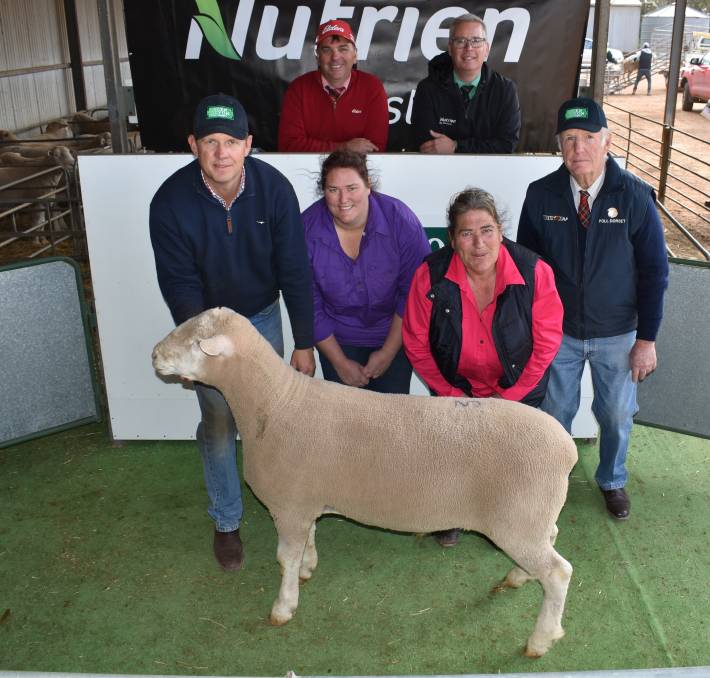 GLEN Devon stud broke its top price record of $8000 with this year's top of $14500 at its annual on-property ram sale at Two Wells on Monday.

The top-price ram was lot three from sire Glen Devon 422-18. The April 2020-drop sale-topper had above average Australian Sheep Breeding Values, with a post-weaning weight of 16.6, fat of -0.6 and eye muscle depth of 2.0.

The sire also had a Terminal Carcase Production Index of 142.7 and went to first-time stud buyer, Zacman Poll Dorsets, Naracoorte.

"I picked him on muscle growth, he was a replacement ram so I hadn't seen him before but he's got the length, he's got the hindquarters and a bit of a different shape to him that I liked," she said.

Ms Kelly was happy she secured lot 3 as it would be introducing new bloodlines to her breeding program but still associated with the existing stud families she has ran in the past.

"We don't like to inbreed our rams, we like to get a bit of a different bloodline," she said.

"We have used a fair bit of Aberdeen and Derrynock in our stud and the ram we bought has got a little bit of Derrynock in it but it is a completely different bloodline and (the ram) has also got an offshoot of another Aberdeen ram, which we haven't used either."

Nutrien Ag Solutions stud stock's Gordon Wood agreed there was a reason the top-price ram was in the "keepers" to begin with.

"His data backed up what he is physically."

Glen Devon Poll Dorset stud principal Lachlan Hart said it was the best sale they had ever had with an increase in sale average, full clearance and highest price.

"This year we tried to present an even line-up of rams all the way through from lot one to 100 and I think we did that," he said.

"The buyers probably appreciated that and were able to bid throughout the whole sale.

"Figures are always improving, they were above the breed average for growth."

The top-price ram, lot three was a replacement ram.

"We had him in our stud group as a potential keeper ram," he said.

"He was a nice balanced, smooth, correct-ram, with some well balanced Lambplan figures."

"Regular loyal clients are what you need to underpin the sale," he said.

"If you're producing something consistent that performs well for buyers, they will keep coming back.

"Its been a record sale for the stud this year."

There were three stand-out volume buyers in attendance at the sale.