A POWER-PACKED lineup of White Suffolk rams from Leahcim at Snowtown sold well on Friday and left the Michael family extremely satisfied after a big week of ram selling. 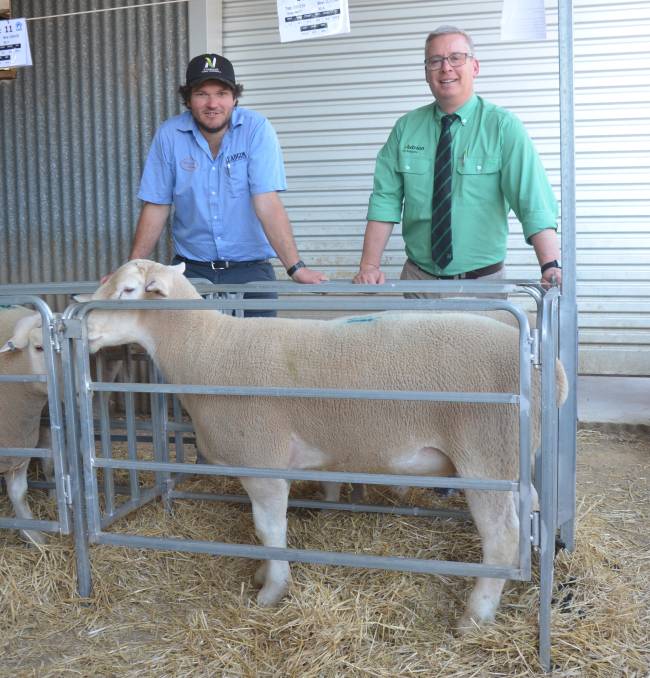 A POWER-PACKED lineup of White Suffolk rams from Leahcim at Snowtown sold well on Friday and left the Michael family extremely satisfied after a big week of ram selling.

Following a fantastic Poll Merino result on Tuesday, the Michael family sold 118 of 132 White Suffolk rams during the main auction to a top of $3000 and average of $1354.

The average was an increase of $255 on 2020 and while some rams were passed in towards the back end of the catalogue, they quickly began selling privately at the completion of proceedings.

Leahcim principal Andrew Michael said the sale was the icing on top of a successful week.

He had some pre-sale concerns due to two major White Suffolk clients shifting their breeding direction to Merinos, so was well-pleased with the final result.

"Replacement ewes seem to be the issue for some of our clients and a lot are building up numbers, and clients that are buying both Merinos and White Suffolks from us are buying more Merinos at the moment," he said.

"We still had really good support from the regulars and the really pleasing part for us is that the consistency through this sale and where the figures are is where we want to be.

"We're really pleased with the muscle pattern on the rams so I'm confident we'll move all the unsold rams through private orders."

The July-drop ram had Australian Sheep Breeding Values of 0.4 for birthweight, 10.3 weaning weight, 16.1 post-weaning weight, 0.3 fat, 3.8 eye muscle depth and came in at 155.5 on the terminal carcase production index.

The entire lineup ranked in the top ten per cent on the TCP index and Nutrien's Gordon Wood said Leahcim's data, combined with their rams' muscle, shape and early maturity made them "ideal prime lamb producers" and good value for buyers.

"There's no question that for a number of years now, Leahcim White Suffolks have been possibly the best value White Suffolks in the nation," he said.

"There was plenty of rams sold around that $800 to $1000 mark and that's really good value for anyone breeding prime lambs."

While unable to attend in person due to border restrictions, NSW clients kept the AuctionsPlus liaison busy.

Nutrien conducted the sale, with Gordon Wood the auctioneer.