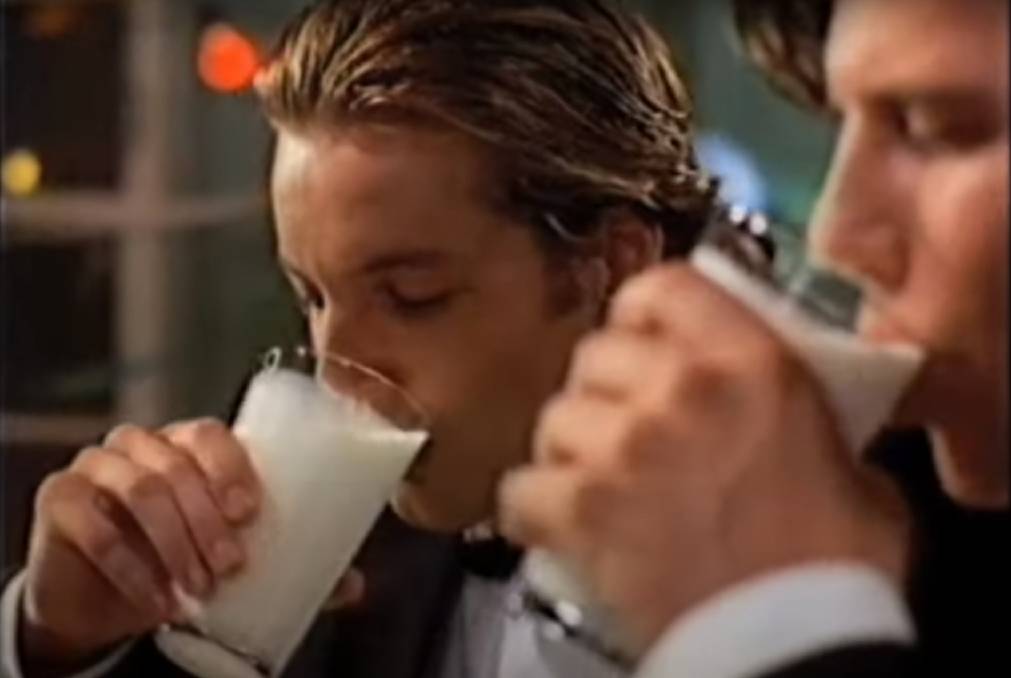 Where are those clever marketing campaigns and good vibes which gave milk the advertising oomph it needs today?

As hype about new era, man-made substitutes to milk and meat grows more intense, questions are being asked about what's actually being done to win back, or at least bolster, consumer loyalty for the real thing.

In milk's case, what ever happened to the clever marketing campaigns and healthy messaging remembered for widely underpinning the community's emotional ties to what's otherwise a fairly unremarkable, everyday product?

For decades milk was not just acknowledged as a good food for a healthy family diet, it was also the foundation for at least a generation of playful marketing classics embracing everything from Bachelor and Spinster Balls to Big M's bikini-enriched, milk-slurping surf culture.

In the US, milk - or rather, fear of running out of milk - even grew into one of the world's most iconic advertising campaigns between 1993 and 2014; "Got Milk?"

On any given day about 80 per cent of US consumers were estimated to be in contact with the pop culture question initially posed by California's Milk Processor Board - "Got Milk?"

In Australia the mood around fake milk and meat has subsequently turned increasingly sour in the farm sector.

Producers feel their natural products, farm lifestyles and credibility are being hijacked, or attacked, by messaging promoting unnaturally made copycat foods, which often includes questionable health and environmental assertions.

"But it's also a good example of how our dairy industry has been caught with its guard down.

"These days you rarely see serious milk promotions, unless it's a campaign for flavoured milk."

Aside from the threat from man-made dairy products, he said relentless use of milk by retailers as a generic, cheap $1 a litre loss leader drawing shoppers into supermarkets had undermined milk's value in consumers' minds.

A decade of dollar milk also seemingly eroded the industry's resources and willingness for positive, big scale advertising campaigns from dairy companies or Dairy Australia, the peak marketing and research and development body.

Mr Wallace is a partner in market research firm Fiftyfive5, with 20 years' dairy food and beverage sector experience, including work with Lion, Dairy Farmers and A2 Milk Company.

He said shoppers needed to be consistently reminded to feel positive about a healthy staple like milk.

Instead, with the absence of exciting, popular marketing ploys, the industry had effectively given consumers "permission to stop thinking about milk".

Shoppers began seeing milk as somewhat cheap and bland, while at the same time new, interesting alternatives made from oats, chia seeds, cashews, rice, almonds and soybeans were on the rise.

Importantly, however, during the same period Meat and Livestock Australia proved there was still abundant sales success to be milked from smart, well co-ordinated, industry-funded marketing offensives.

"And, I don't believe they can blame the drought for diluting their long-term funding focus on marketing.

"Advertising's not cheap, but that doesn't mean the red meat industry rests on its laurels.

"Even pork seems to kick more marketing goals than dairy."

Interestingly, however, research suggests the rise and rise of so-called fake milks has, so far, not been as damaging to dairy's support base as many fear.

While Dairy Australia conceded there was much more to be done to communicate with consumers and reinforce real dairy's healthy, natural credentials, Australia's per capita milk consumption was holding relatively well, despite falling 7.5 per cent since 2016.

At 97 litres annually - almost a third stronger than the US, Britain, Canada, and even the European Union which has some of the world's biggest milk drinking nationalities - Australian consumption is supported by an average 98pc of households regularly buying fresh milk.

While 34pc of consumers did buy dairy alternatives, the vast majority of that cohort bought real milk, too.

Farmer-funded Dairy Australia spends about $4m a year on marketing - a figure likely to be boosted further given last year's national dairy plan made marketing and consumer trust building a "top five" priority in the next five years.

However, Ms Zucco said social media and a new era of consumer social consciousness mean dairy's advertising and audience engagement efforts must be far more targeted and sophisticated than the big "spray and pray" television campaigns of 15 or 25 years ago.

Today's messaging strategy focused not only on dairy's nutritional value for human bones, muscles and heart health, but farmers' environmental and animal welfare credentials, and engaging programs for schools.

"There is an environmental cost involved in consuming these man-made products," Ms Zucco said.

"We're not trying to provoke friction with other food industries - that just puts consumers off - but we are serious about defending our own environmental sustainability message.

"There are really interesting ways to use social media to talk directly to changemakers or health professionals, or respond to commentary about dairy products and environmental claims."

Dairy was still loved by most Australians who also valued its nutrient richness and natural origins, but today's consumer expected more than advertising.

"They want to see that we share their social values and are proactive about animal welfare or environmental priorities," she said.

"There's a bit too much advertising focus on cows and farmers in grassy paddocks," said Mr Davey, a former Milk Marketing NSW chairman and general manager of the state's Dairy Corporation.

"That doesn't really sell milk or push the buttons which suggest emotional enjoyment and fulfilment for the consumer."

Playing to the Australian sense of humour while also highlighting red meat's natural taste and nutritional qualities has proven almost too emotionally successful for the lamb industry.

"We do feel the pressure to come up with something fresh which clicks with what people are relating to each year," he said.

"But we're also incredibly lucky and proud to have a great natural product to sell - and it fits our culture so well."

Like the dairy sector, MLA was particularly mindful of alternative protein products attempting to piggyback their way into its market.

Its response was to ensure its advertising spruiked the basic, naturally nutritious qualities people loved about eating, smelling and enjoying real lamb, which also brought everybody together in a very Australian lamb way.

"Red meat's always had competitors, although we've now got players trying to pass themselves off as selling meat which is not like meat," Mr Yardy said..

"Their products are actually just highly processed foods, whereas beef and lamb are the natural article, and highly nutritional contributors to our diet."

Marketing consultant, Mr Wallace said there were ample ways to combat the imitators and highlight meat and milk's natural appeal to consumers.

"Plenty of advertising agencies would fall over themselves to have a crack at refreshing milk's image," he said.

"There's nothing sexy, fresh, natural or good fun about the way almond milk is made."