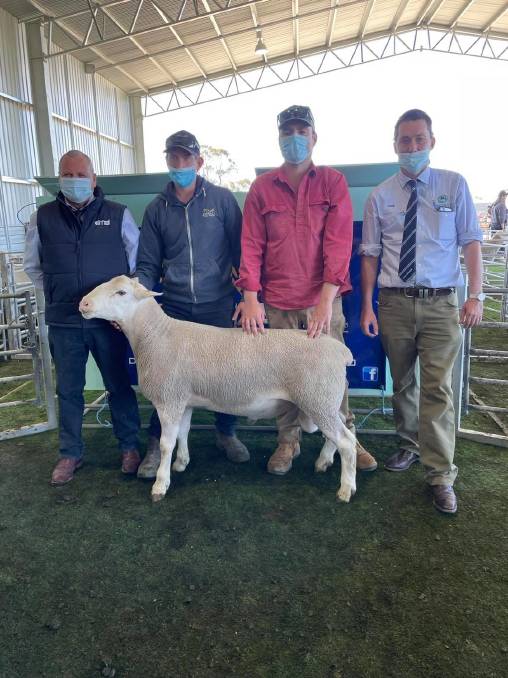 OMAD White Suffolks, Kaniva, has achieved a near total clearance, in what stud principal Damien Hawker said was the best line up of rams he had ever offered.

"There was certainly a lot of value-buying opportunities, that's for sure," he said.

"It was probably the best line up of rams I have ever put together."

He said he put that down to "selection pressure".

"I am getting a few numbers around me and using industry-leading sires," he said.

The sale followed a near total clearance last year.

Mr Hawker said recent good conditions had brought the rams to peak condition for the sale.

"The last six weeks, the rams have really jumped out of their skins - they have really bloomed, you could say," he said.

"They presented extremely well and the sale line up averaged about 110 kilograms."

The ram had an intramuscular fat value of -0.33pc.

The buyer of the top-priced ram, Ben Harding, RJ Crouch and Co, Kaniva, said it would be joined to Merinos, in a crossbred lamb program.

"He was just a stand out," Mr Harding said.

"I liked his look and his good figures.

"He caught my eye in that first couple of pens."

He said he bought another four rams, all of which had good post-weaning weight figures.

He said they would be used as replacement rams, as he was clearing out some older animals.

Driscoll McIllree & Dickinson Nhill livestock agent Chris Barber said it was an outstanding run of rams, with quality right through the catalogue.

"Considering a very tough autumn, the rams were in terrific condition.

"Buyers will be very pleased with the value for money they were able to achieve."

Mr Kyle said buyers from the south-east and into South Australia picked up rams.

"They are good 'meaty' rams, they stand well and they are good, early-maturing sheep."

He said several buyers picked up more than one ram, with Rich Farming Trust purchasing 12.

"A couple of those blokes who came for three or four ended up with five," he said.