Bids flew thick and fast from the first to the last lot at Nyowee's 22nd on-property sale on Wednesday, with the Halbury stud enjoying a full clearance of an increased offering. 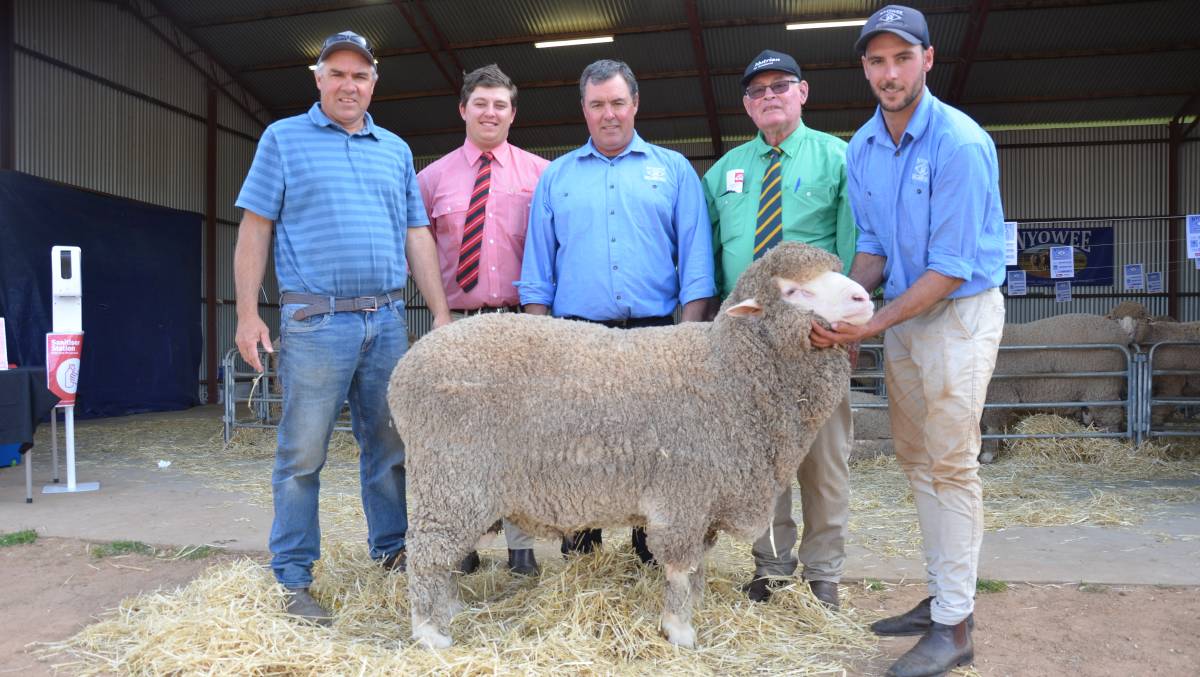 Bids flew thick and fast from the first to the last lot at Nyowee's 22nd on-property sale on Wednesday, with the Halbury stud enjoying a full clearance of an increased offering.

It was knocked down to Philip Roberts, Goodonga Props, Auburn, who has been buying from Nyowee since 1992.

"I know the Nyowee sheep very well, and I thought lot 2 was very true to type, with a great long stretchy body, terrific wool," he said.

"It will do a lot for our flock in terms of size of wether lambs, and great wools and wool cut - it certainly ticked a lot of boxes for me."

Mr Roberts runs 1900 Merino ewes in a self-replacing flock, and buys between five and 10 rams from Nyowee each year.

He was active early in the sale, securing eight other sires, many at the top end, for an overall average of $4605.

Nyowee stud principal Ian Michael said it was an "unbelievable" sale, and was grateful to have the support of a plethora of returning buyers.

"To have an extra 40 rams on last year and still see the average going up by a couple of hundred dollars is really positive, we're pretty lucky to have a real loyal base of clients here," he said.

Mr Michael said the stud was particularly focusing on meat traits and fertility.

"Most areas are having a good season, and the Merino industry, especially on the meat side, is going really well, a lot of fellas are getting great results on their store or surplus sheep," he said.

"And the more lambs on the ground, the more you can keep, the more money you make, so fertility is crucial."

the representation of buyers through SA and also interstate, return and new, show Nyowee sheep can perform wherever they go. - TONY WETHERALL

He runs 9000 Merino ewes in a self-replacing flock, and another 4500 Merinos joined with White Suffolks.

WG&EM Bendall, Elders Lake Cargelico, secured 17 rams, peaking at $2000 and averaging $1724, while eight rams were knocked down to Langawirra Station, Broken Hill, averaging $1600 and peaking at $1700.

The sale was conducted by Elders and Nutrien, with Tony Wetherall and Leo Redden sharing the auctioneering duties.

Mr Redden praised the evenness and the quality of the line-up, the majority of which had been paddock-run.

"Even right back at Lots 180 to 200, there were still really stylish nourished wools, that was the highlight for me," he said.

Mr Wetherall said the dual purpose nature of the sheep was particularly impressive.

"It was a terrific sale, we always talk about dual purpose sheep, but Nyowee are renowned for their good square carcases and good long staple wools with plenty of style and nourishment," he said.

"The sheep here are very productive, the representation of buyers through SA and also interstate, return and new, show Nyowee sheep can perform wherever they go."