Overall the Rubie family of the Warroo-based stud sold 160 rams for a full clearance and average of $4818.

Rams sold at all price points, from $1500 up, with both repeat clients and new buyers from Queensland, Victoria, Western Australia and throughout the Tablelands and Western regions of NSW operating on the quality draft.

Returning to buy from the Lachlan stud, Rhodes Pastoral join around 22,000 Merino ewes and own their own feedlot in which they finish their own lambs.

"This is the fifth year they've bought from here, and the second year they were unable to attend due to COVID," Mr Thrift said. "We went through the draft and selected five rams for them which we narrowed to three and this ram was their first pick.

"They [Rhodes] were chasing carcase and an early maturing type, with good skins and white, waxy wools." Targeting a 20-micron fleece, Mr Wright said they first got onto Lachlan genetics as they looked to increase the size and growth rates of their sheep.

"We went to the South West Slopes Merino field days a few years ago, and found Lachlan wool was similar to what we were after - bold, heavy crimping, wool and heavy cutting - but they also had the size," he said.

"We wanted to inject size and quicker growth rates in wethers for finishing, without compromising on the type of wool.

"This fellow has body size, is uncomplicated, stands well and is a beautiful looking animal and will be a good addition."

Rhodes Pastoral also has its own nucleus flock from which it breeds rams.

"This ram will go into the stud nucleus flock," Mr Wright said.

"We have been running that for nine years and this year we had about 100 two-tooth rams that were really good that will go back over our commercial sheep.

He said they also select some rams produced from the nucleus flock to go back over the stud ewes.

"We picked six this year, and three were Lachlan bred so it says we are going down the right path," Mr Wright said.

It was the first time the Lachlan stud had Australian Sheep Breeding Value (ASBVs) on all the rams offered in the draft, which was well-received by clients.

"It is the first year we've offered the rams with figures and it has been really positive, we used a ram, LM140179, which is in the top five per cent for MP+ and that has given us a lot of linkages," Mitch Rubie of Lachlan Merinos said.

"Our older clients are learning the ropes with the figures, but it certainly brought new clients in."

With good growth, fleece weight and great micron reducing ability, Mitch said the main attribute of the top-ram was his carcase.

Glen Rubie said the stud drew in a number of new clients that were "wanting good structure and feet" in their rams. 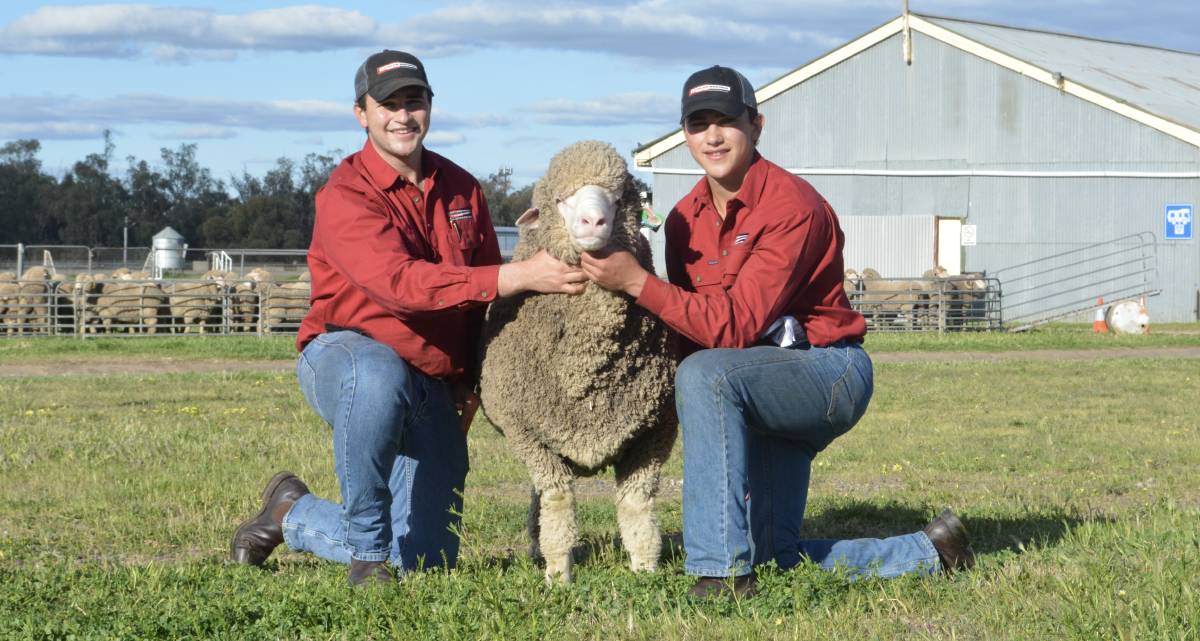 Mitch and Campbell Rubie, Lachlan Merinos, Warroo with Lachlan 200721 ram purchased for $7500 by Kevin and Therese Welsh of Eugowra.

Buying from the Rubies since their first sale, Kevin and Therese Welsh of Eugowra, purchased one of the second high-selling rams, Lachlan 200721, as part of their draft of three rams at a $7167 average.

"He had a terrific skin and phenomenal staple length," Mitch said.

Also from the northern state was Andrew and Di Parsons, Altonvale, St George who selected a draft of seven averaging $1929.

The largest volume buyers during the auction were M and L Ellis, Argyle, Panuara who bought 22 for a $4341 average. Mark Jones of Booroola, Condobolin was also a multiple buyer, securing 20 rams at a $5550 average.

Chasing size and nourishment, Mr Jones has been buying Lachlan Merino rams for 20 years now for his flock of 2500 Merino ewes which average a 20-micron fleece with an average wool cut across the flock of nine kilograms.

"We are chasing a dual purpose type, with good wools and good meat," Mr Jones said.

"Recently we had wether lambs cut 9kg of wool at nine months, and we sold them for $210 a head through the yards so we did the sums and they returned $280 a head.

"We also had 12-month-old cull ewes off shears, unjoined, sell for $310/hd in the yards. They cut seven kilograms of wool at nine months."

Other significant purchasers were Westbury Pastoral Company, Temora, 12 rams at a $5000 average, the Knight family of Wattle Villa, Gooloogong, 11 rams at a $5545 average and Flick Estates, Cumnock, 10 rams at a $5500 average.

Fifty grade rams sold after the sale, with more available over the next two months.

"They are productive sheep that grow wool and supply meat," he said.

"We have invested a lot into growing our numbers and have done DNA on the rams to help provide more measurement and selection tools to our clients.

"We will have the most rams to prepare for next year, and if we know people want more rams, we will put more up."

The sale was conducted by Elders and Nutrien with auctioneers Paul Jameson, Elders and John Settree, Nutrien sharing the duties.

The story Lachlan Merinos' $18,000 sale-topper to WA first appeared on The Land.