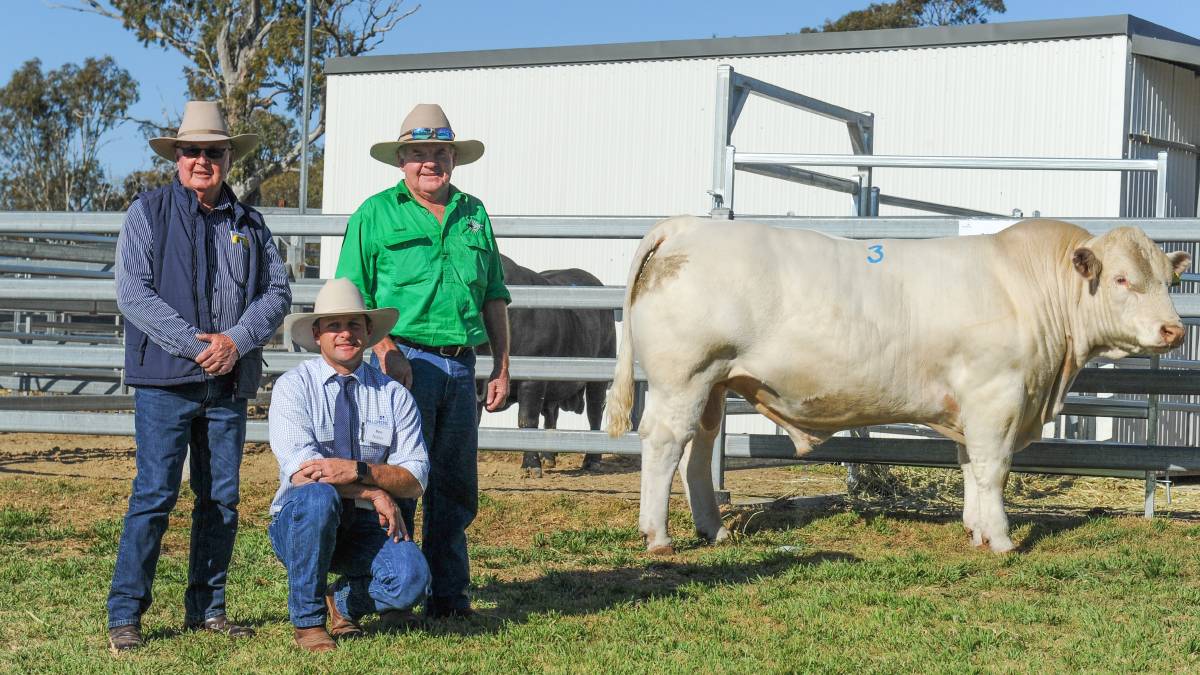 The auctioneers rattled through the 174 bulls in three hours.

Palgrove prides itself on "raising the bar" and Friday's annual on-property bull sale at Dalveen was no different, where the stud broke all of its personal records and reached a $75,000 price tag.

Their signature Ultrablack breed saw heightened demand, with 64 bulls selling for an Australian breed record average of $20,172 while the first offering of 11 Brangus bulls averaged $17,818.

Palgrove's Ben Noller was overwhelmed after the sale, especially given the support from repeat and new clients.

"There were a lot of repeat clients, certainly in the top end of things, and there were some new names here too which was really pleasing to see," he said.

"Particularly in the Ultrablack section, we saw a lot of new buyers there. The Ultrablack breed is certainly gaining a lot of traction and the results are really speaking for that too."

In an impressive effort auctioneers Michael Smith, Colby Ede and Darren Perkins flew through the offering in three hours, with a rate of close to one bull per minute. 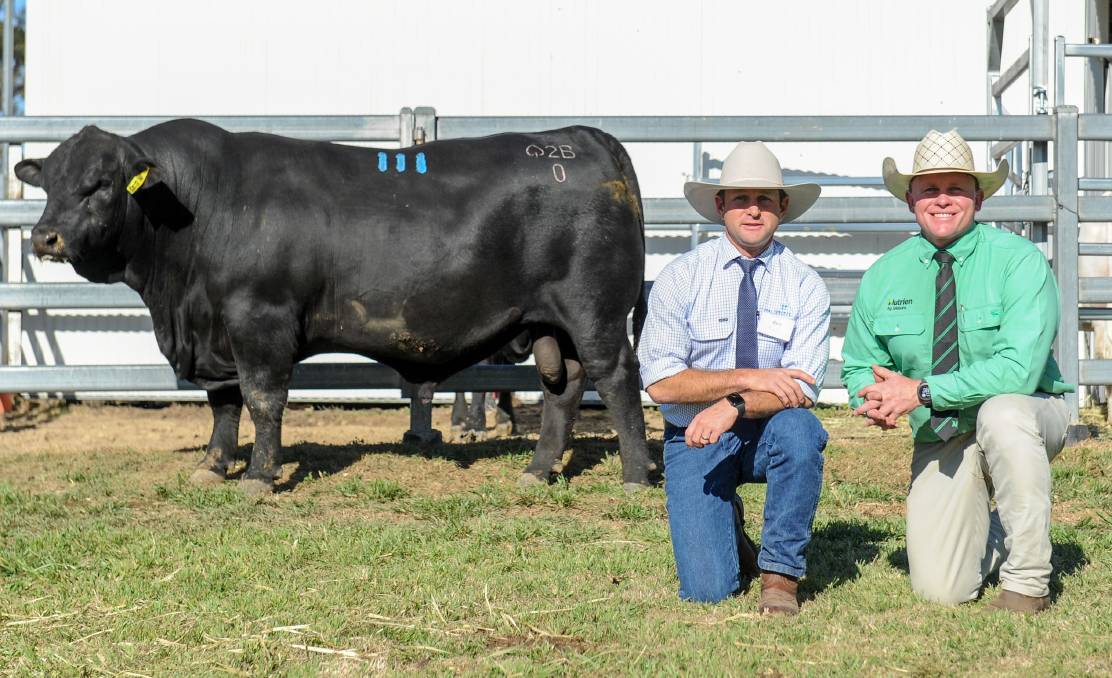 Prices flew almost as quickly, with the stud breaking their Charolais and Ultrablack top price records.

The day was off to a cracking start with Palgrove Qracker selling for $75,000 to Donald Burnett of Mt. Douglas Pastoral at Clermont.

Described by the stud as the best son of Palgrove Justice, the nearly two-year-old weighed 962kg and had one of the biggest eye muscle areas in the catalogue of 150 square centimetres, coupled with fat measurements of nine and seven millimetres respectively.

The class place getter in ACM's Sire Shootout was set to be used in a single sire joining at Mr Burnett's 30,000 hectare property where he runs a breeding and fattening operation turning off bullocks.

Qracker was one of three purchases for the repeat buyer that together averaged $41,666. 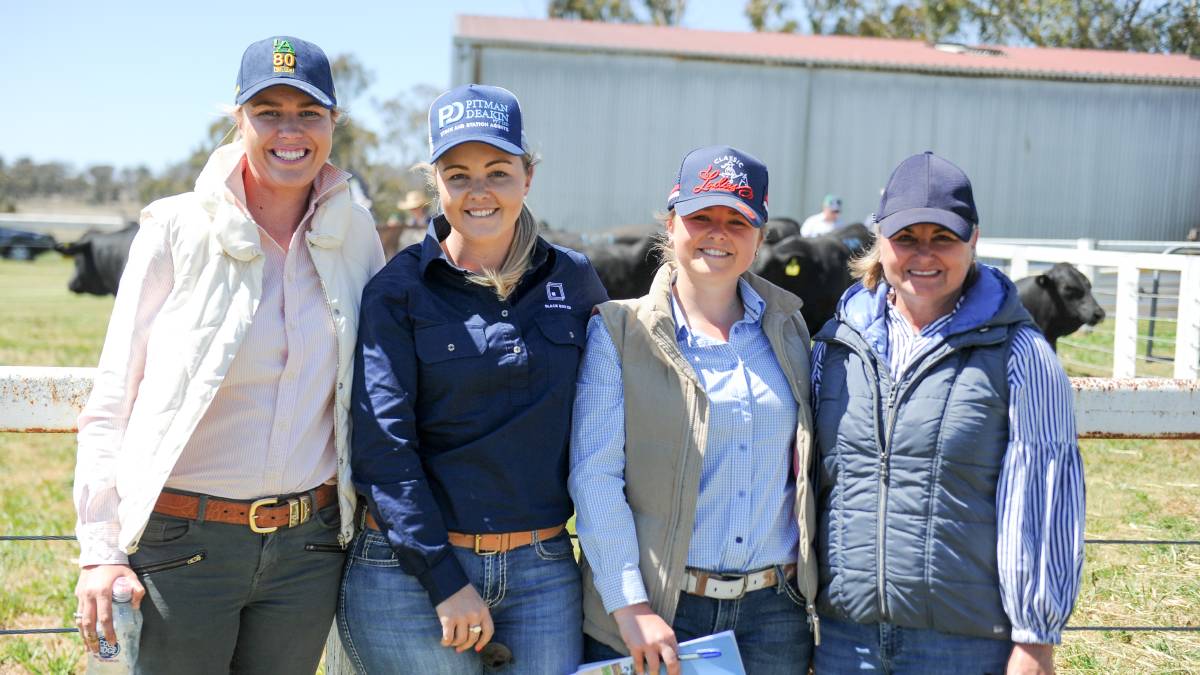 The commercial cattleman, who'd been buying from Palgrove for years, said it was the quality of the bulls and their progeny that kept him coming back.

"The cattle prices have been good so the money's burning a hole in your pocket," Mr Burnett said.

Yearling Charolais bulls were bringing top dollar too with Palgrove Rainmaker, a son of Palgrove Longyard, making $46,000 and knocked down to last year's top price buyers Len and Sue Bode, Percol Plains, McKinlay. He was one of six heading on the truck to their property averaging $36,000.

A new Australian breed record top price was also set in the Ultrablack offering when Palgrove Quantum sold for $35,000 to Robert and Anna Hick of Julia Creek.

Described as an "ideal beef bull", the 25-and-a-half-month-old son of CRC Guardian 9U8U5 and Glenroy G1109 weighed 938kg with an EMA of 150 sq cm and fat measurements of 12 and nine millimetres.

The level of support from northern and north west producers was evident, with WTG and LA Dobe and Sons at Ravenshoe leading the way and purchasing 11 bulls at an average of $18,545.

Not far behind with 10 bulls averaging $13,700 were the Middleton family from Warwombie Station at Hughenden and TVF Pastoral from Albro Station at Clermont who also had 10 averaging $17,800.

Selling agents were Elders, Nutrien, George and Fuhrmann, and Hourn and Bishop.

Read the full report in next week's paper.