Counsellor Elle Petersen and her horses are helping both adults and children learn great life lessons and also open up during therapy. Her business, Beyond Words Counselling, has relocated to Naracoorte. 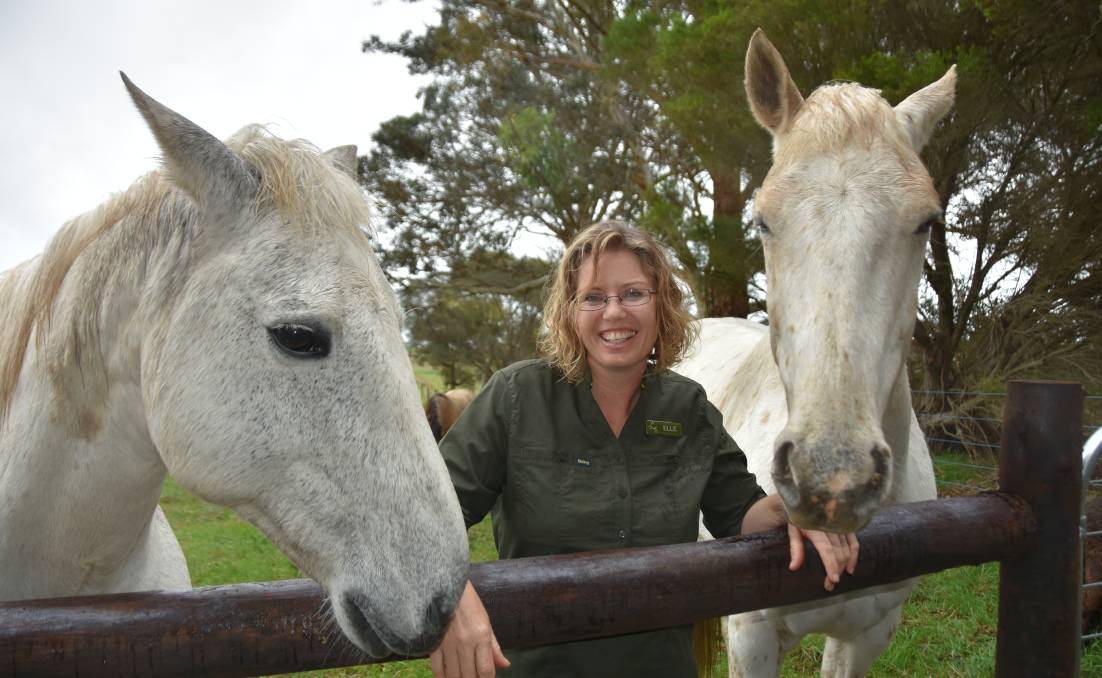 Elle Petersen's journey into equine-facilitated learning and animal-assisted counselling started when she gave a beautiful Percheron-cross horse a second chance at life.

Five years later, her business, Beyond Words Counselling,at Naracoorte is making a difference to children and adults across the Limestone Coast.

It is the only accredited business of its kind in the region.

That first horse, Obi-wan, and five others Elle owns - all named after Star Wars characters - are helping teach great life lessons, such as building confidence and self-worth to clients, in one-on-one sessions.

And during therapy they are often present to help get her clients to open up.

Elle has always been a lover of animals but was a latecomer to horse ownership.

This came a few years ago when her husband wanted to convince her to move from far north Qld to Millicent for a job opportunity.

"He promised me he would buy me a horse if I came down here, I said that I would need a horse float too," she joked.

She admits she took a while to connect with Obi-wan who was a "very skittish" horse and terrified of many things, but she never gave up.

"He was on his way to the doggers before I got him, which is unfortunately where a lot of misunderstood horses end up," she said.

As soon as she recognised he had "his opinions" and just wanted to be listened to, she says their relationship blossomed.

"He is like so many people in life that find themselves not where they expect to be - if someone just listens to us we can reach our potential," Elle said.

Instead of riding him though, she spent many hours with him on ground work, where she saw his potential as a therapy horse, especially with his tolerance of children.

"Despite his large size he is better suited than many smaller horses to working with children because he won't step where they are," she said.

She then undertook a course at Australian Equine Facilitated Learning in Melbourne, and from there the duo worked together for the practical assessment.

Elle says she always knew that if she became a practising counsellor she wanted to do it in a relaxed setting rather than sitting in chair and having the client lying on a couch.

So after completing the course she started thinking, "I can do this".

"I started going out to people and meeting them at the showgrounds or at the beach or at riding for the disabled but it limited what I could do with them," she said.

"I did a trial with one client where they came to us and it just worked, my husband and I discussed that we needed more horses and a bigger farm."

After selling their Millicent property, the couple rented a property in Kingston SE.

Each visit put smiles on the faces of the residents and gives them something to talk about when their loved ones come to visit, but it also warms Elle's heart.

"Last time we snuck into the hospital and went up to see a couple of the patients," she said.

"The studies show having an animal in there takes away the clinical feeling and it lasts for several days."

She has also enjoyed taking a few of her horses to Kingston Community School, where she has worked with a few students to help them make better social connections and grow in confidence.

There is the immediate calming effect that comes from grooming and spending time with horses, but there is so much more we can turn it into. - Elle Petersen

She hopes the successful pilot program can be rolled out to other schools in the region.

Equine-facilitated learning is suited to most people - unless they are allergic to horses - according to Elle and she encourages anyone interested to give it a go.

The sessions are also often claimable for those on a National Disability Insurance Scheme plan, she said.

"You don't really have to like horses but what you learn from working with them can be applied elsewhere," she said.

"There is the immediate calming effect that comes from grooming and spending time with horses, but there is so much more we can turn it into."

She says horses offer instant feedback and while it may take time it can be hugely rewarding for clients when they earn the trust of a horse to follow them, or they assert their authority so that a horse doesn't try and eat feed out of a bucket without the client offering it to them.

"Horses may tolerate something you are doing but they don't particularly like it, you have nothing they want until you prove yourself," she said.

In August, Elle and her husband found a suitable property - a farmlet on the outskirts of Naracoorte - from which to expand Beyond Words Counselling.

They have been busy preparing to host more one-on-one client sessions, with renovations including decking out an old hay shed with comfy arm chairs and an area where clients can work one-on-one with one of the horses.

"I am also really keen to run workshops like a women's empowerment day, an anxiety workshop and also a parent and teen connecting one where people can come out for the day," she said.

Beyond Words Counselling will hold an open day on September 26.