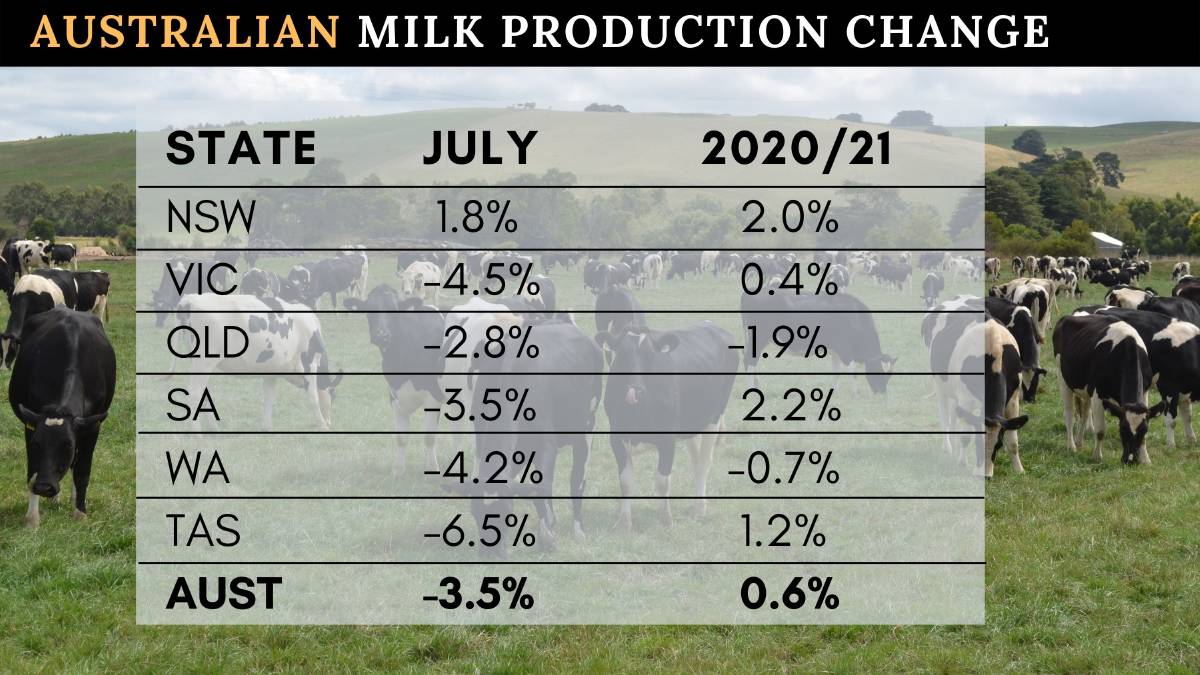 Australian milk production fell 3.5 per cent in July compared on the back of wet conditions.

Australian milk production fell 3.5 per cent in July on the back of wet conditions.

The latest data from Dairy Australia revealed production was down on July the previous year in all regions except NSW.

The biggest falls were in Tasmania (down 6.5pc) and Gippsland (down 6.9pc).

"So there is a strong comparison month at play too."

Mr Droppert said it was too early to see if this fall set the tone for the season as July typically represented just 7pc of full seasonal milk flows.

The July fall came on the back of a slight increase in production for the 2020/21 season.

Although national production in June was down 1.1pc, production for the year finished up 0.6pc.

NSW has been the standout performer in the past three months, with production up 1.8pc in July and 2.0pc in June.

Tasmania has struggled with the wet winter with production also down in June (-4.7pc), despite hitting record production for 2020-21.

In Gippsland, floods and heavy winter rainfall have hit production, which was also down in June (-6.5pc).

It forecast the Australian national dairy herd would stabilise in 2021/22, as some farmers increased stocking rates, offsetting culling by others.

The report revealed that culling rates dropped 23pc to April 2021 compared with the previous six months, despite the high beef prices.

"The new season is underway and conditions on the farm remain favourable," he said.

"Global markets remain mostly balanced, but China import demand continues to do the heavy lifting in terms of trade growth," he said.

"The pathway out of the pandemic remains very mixed in terms of vaccine rollouts and consumer mobility restrictions in many key dairy import markets."