AT WORK: Peter Barr, Pinnaroo, in action competing at Casterton, Vic, in an earlier competition.

Pinnaroo-based dog breeder and trainer Peter Barr knew from an early age that'd he make his hobby a career.

PETER BARR was always going to work with dogs.

As a child, Mr Barr was always around his father Kelvin's working dog pups, and kept his first dog at nine.

By the time he left school in 2010, he'd kept a pup from every year through secondary school, and was focused on becoming a professional trainer.

"As soon as I left school I spent 18 months in the meatworks penning up but apart from that I've been on the road with my dogs," he said.

His love for dogs came from his late father Kelvin "Twisty" Barr, whose best dog, Narcooma Hammer, has been influential in SA.

"Dad would tell us a story about when he was about seven or eight, he went out on the farm with his poppa to get the sheep in on two wheeler motorbikes," he said.

"Poppa pulled up at the bottom of the hill, sent a dog up the hill and sat there, waiting for dog to put the sheep through the gate.

"Dad said he wanted to be able to do that as well."

Mr Barr was a natural with dogs and started trialing as a child.

"I could see I was pretty good with the dogs, natural with them to understand them and I'm a bit the same with livestock," he said.

"I used to borrow dad's old retired dogs to get around the course at about eight or nine, but once my first dog was old enough I started competing with him."

He won many awards as a junior trainer, but his biggest achievement was winning the improver award at the Australian Yard Dog Championships at Casterton, at the age of 14.

Mr Barr is based on a 162-hectare property near Pinnaroo, and travels for his work, which includes contract mustering and yard work.

He started holding working dog schools in 2013 and now runs schools in all states, with up to 10 people in a group.

He still competes in local trials across SA and Vic, along with the national competition, which was held at Armidale, NSW, earlier this year.

Of the 156 runs, his dogs were 11th and 27th, and winning that competition remains among his many goals.

Mr Barr also breeds a litter each year, on top of his eight to 10 working dogs. 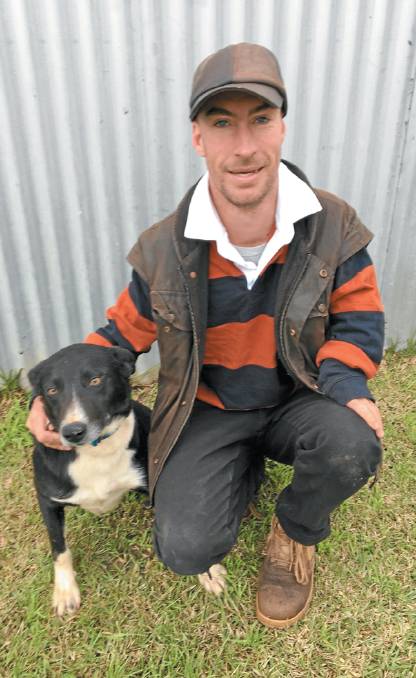 "I used to breed a fair few and sell pups, and buy a few dogs in and sell them on, but now I'm just focusing on my own stud dogs, focusing on quality over quantity," he said.

"There's a big waiting list for those dogs - buyers know that there are no bad habits because I've had them the whole time.

"Dad left me with a pretty good opportunity with the dogs, so I've kept his line of dogs going.

"He had a lot of success with yard dog trials and represented SA for 12 years in a row - 10 years with Hammer."

Mr Barr's goal is to improve his position at the national competition each year, and he has a couple of handy dogs in Tippacoop Charger, Barkhill Flash and Charm.

"They're trial dogs, but they also have to work," he said.

"You've got to keep them sharp, ready for competition, but also been able to do any job with them, because they're the tools of my trade, as well as my sport."

LUCINDALE will be home to the state's first working dog auction in September, with 45 dogs on offer from some of the best breeders and trainers in SA.

The Lucindale Working Dog Auction will be held at Yakka Park on Sunday, September 26, with bidding available in person (COVID-19 restrictions permitting) and online via AuctionsPlus.

She said many of the committee members had been attending well-known auctions at Casterton, Vic, and Jerilderie and Wagga Wagga, NSW, for many years, and it would be a great event for the Limestone Coast community, given the annual South East Field Days were cancelled earlier this year.

"We'll have 45 dogs in total - 40 dogs and five pups - and it's a not-for-profit event, so everything will go back into the community," she said.

Videos of each of the dogs in action in the yards and paddock will be posted on the group's Facebook page and a short demonstration of all the lots will be held on the morning of the auction.