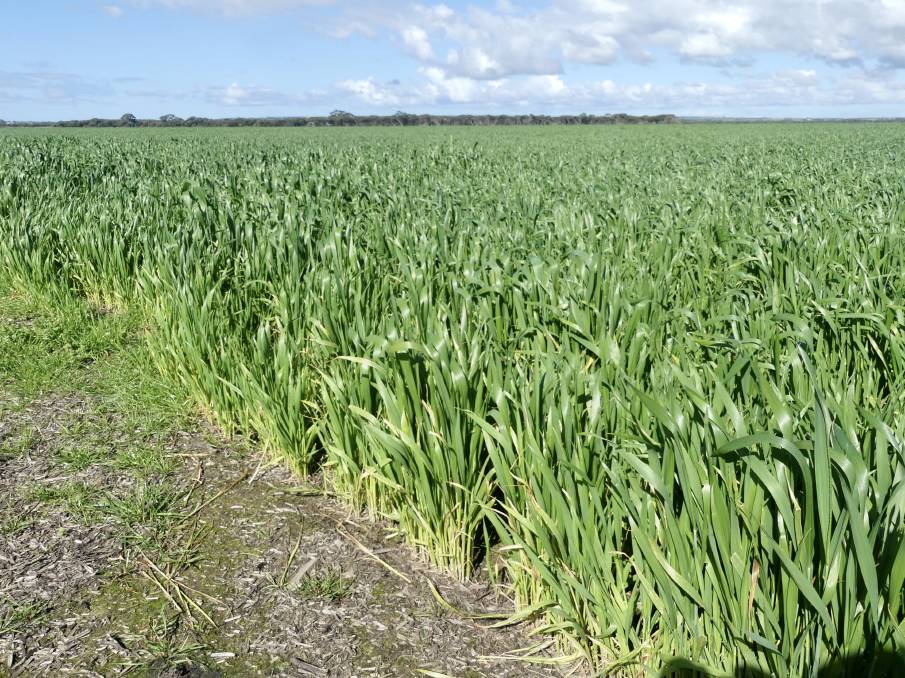 WHEAT CROP: This wheat crop at Cygnet River planted by Bellevista farms is doing well as it's not as badly impacted by standing water. Photo: Stan Gorton

KI growers were hit with a late start, but unlike the rest of SA, the Island has seen some intense rains.

While the state is predicted to have its second highest grain crop in past five years, Kangaroo Island farmers have battled adverse growing conditions.

KI growers like their state counterparts were hit with a late start but unlike the rest of SA, the Island was seen sometimes intense rains and a lack of sunshine that has impacted on not only crops but also pasture.

Across SA, late rains to kick off the 2021-22 grain season and 70 per cent of the crop dry sown has culminated in an early estimate of 7.6 million tonnes, according to a state government report released last week.

The latest PIRSA Crop and Pasture Report estimates almost 4 million hectares of crop had been sown, similar to 2020-21 but production about 1.5 million tonnes down on last season.

Standing water was impacting on crops, with certain parts of the Island more affected than others, and canola particularly impacted on by having its roots wet, he said.

Dry seeding on Kangaroo Island in May 2021

There had been a loss of growth potential due to both the late start and then the wet, overcast winter, which impacted on the Island more so than elsewhere in SA.

"It's nice to finally see some sunshine and we are hoping to get a good, late spring that will allow the crops to finish off nicely," he said.

Primary Industries Minister David Basham said the lack of soil moisture to start the season meant many farmers dry sowed and hoped for rain which thankfully arrived in late June.

"There is no doubt farmers are going to need more rain to improve on the 7.6 million grain crop estimate and it is noted the current Bureau of Meteorology outlook for the August to October period shows increased probability of a wetter than normal winter and early spring," he said.

Mr Basham noted almost 10 per cent of South Australia's canola crop had been planted with genetically modified canola after his government lifted a 16-year ban.

The Island however will continue to be GM free, allowing Kangaroo Island Pure Grain to achieve premium prices for not only its canola, but all grain.

Having this clean, green image thereby helped KI growers to offset the increased costs of producing and transporting a bulk product off the Island.

The story Late start for KI crops, then too much rain first appeared on The Islander.