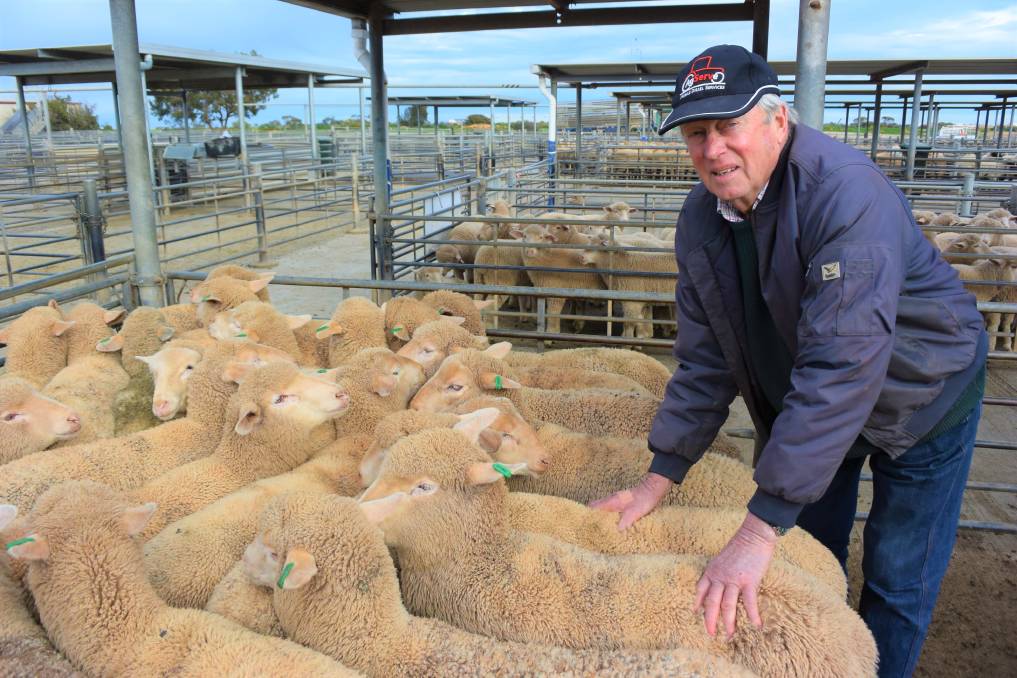 PRODUCERS WAIT: Kapunda producer Robert Humphris "tested" the market at the SA Livestock Exchange at Dublin this week, and made $186 for new-season lambs.

RETURNS for new-season lambs will depend heavily on whether supplies begin to replenish at markets across the state, as many producers continue to weigh up if they are better off selling lambs in the coming weeks or waiting for higher weights to be achieved.

RETURNS for new-season lambs will depend heavily on whether supplies begin to replenish at markets across the state, as many producers continue to weigh up if they are better off selling lambs in the coming weeks or waiting for higher weights to be achieved.

Lamb offerings at markets are significantly lower than expected, stock agents say, and this is resulting in higher prices for lighter lambs.

At the SA Livestock Exchange at Dublin on Tuesday, about 500 new-season lambs were yarded, back by a sizeable 1500-head compared with the same time last year.

A recently-cancelled prime lamb market at Murray Bridge and a looming lack of numbers at Adelaide Hills and Mid North sales in the coming weeks could also instigate a price rise.

Nutrien Ag Solutions auctioneer at Dublin, Peter Marschall, said an influx of lambs was expected in mid to late September, but he was unsure whether numbers would reach the same levels as past seasons.

"August markets will be difficult and there is already a struggle to find numbers - so prices could rise because of this," he said.

"The store lamb price is still strong. Although some producers will wait to make their decision on when to sell, some will take the money now."

If producers wait to sell, we could see anywhere between 6000 and 7000 lambs yarded by the end of September. - Matt Ward

A potential six-week lag in heavier lambs coming onto the market meant Tuesday was the first sale at Dublin that had yarded a small number of lambs up to spec, with a pen of 54-56-kilogram liveweight lambs making $240.

Last year, new-season lambs of this size were yarded about three weeks earlier and Elders Dublin/Yorke Peninsula livestock manager Matt Ward said most producers were still up to a month away from making a final decision on when to sell lambs.

"Producers are not hurrying and are watching the market closely - they still have time to determine their course for this year," he said.

"If producers wait to sell, we could see anywhere between 6000 and 7000 lambs yarded by the end of September."

Kapunda producer Robert Humphris "tested" the market at Dublin this week and made $186 for lambs that weighed 43-48kg but was "undecided" about whether or not the rest would be sold in the coming weeks.

"We sold this week to just see what would happen because we are about a month behind with weights," he said. "I was happy with the price but I am still undecided on if I will hold lambs back to increase weights."

Mr Humphris said it was difficult to find a balance and determine if feeding lambs for longer would involve a cost that was not returned at the other end.

Lambs initially destined for the cancelled Murray Bridge market from Woodchester lamb producer Neil Harvey, on behalf of N&K Harvey, were sold at Dublin this week and made the $240 top price.

Mr Harvey sold heavy lambs and was pleased with the return, but said it was difficult to know when was the best time to sell.

"When the Murray Bridge market was cancelled, we had to weigh up whether waiting for the next potential market on August 23 was viable," he said.

"We chose Dublin because in the past the prices have been good there and we already planned on selling. There are buoyant returns for lambs."

Mr Harvey said half of this season's lambs were sold.

"We have the weights so far but we are still watching the market in the coming weeks to determine which way we will go - either contract or sell at the saleyard," he said.