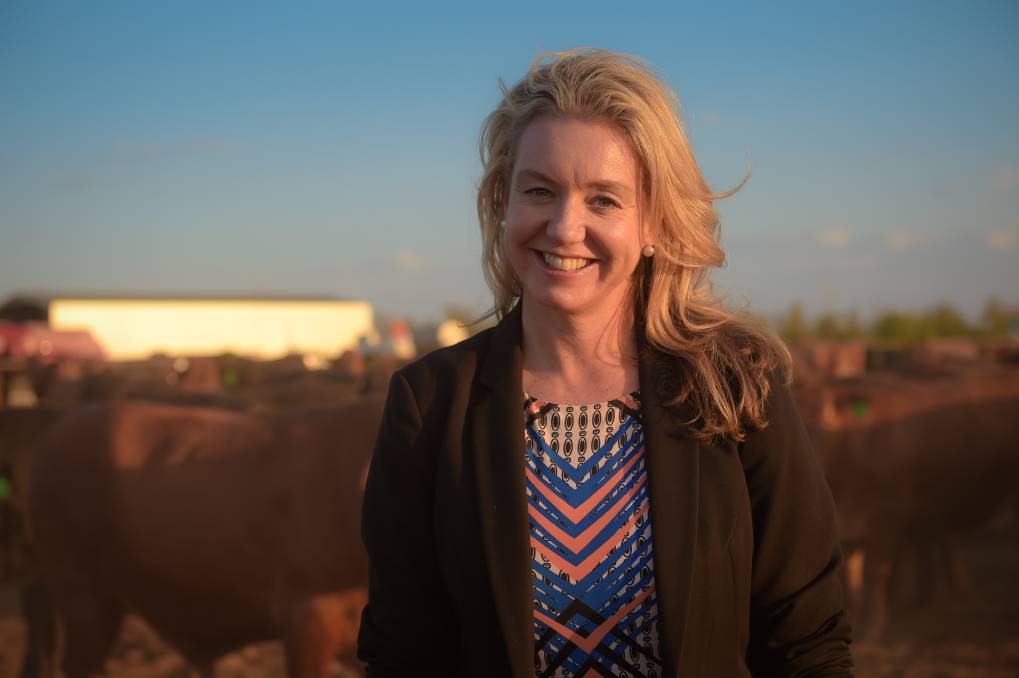 Senator Bridget McKenzie says it isn't up to couriers to discriminate against highly-regulated legal products that regional Australians use for economic, social and environmental benefits.

The Shooting Industry Foundation of Australia has called on the federal government to help develop a solution for rural firearms users as a second major freight company announced it would no longer service retailers of firearms, explosives and ammunition.

The Shooting Industry Foundation of Australia has called on the federal government to help develop a solution for rural firearms users as a second major freight company announced it would no longer service retailers of firearms, explosives and ammunition.

The concerns around how graziers, pest controllers and veterinarians among others will be able to access the sometime sizeable loads they need to conduct their businesses deepened last week when Northline communicated a change in processes.

The Australian-owned company, which says on its website that it was founded to service remote northern Australian communities, told customers that it had reviewed the "complex and diverse regulations and requirements to move firearms, explosives and/or ammunition across borders and intrastate".

This review resulted in a 'limitation of their National Service Scope' and a revised rate schedule, to come into force on August 30.

It follows news of a similar decision by FedEx/TNT in late July, which SIFA's executive officer James Walsh said had blindsided the Australian firearms industry as a whole, but would impact rural users most of all.

"Supply chain issues will be inevitable and there will be ammunition shortages and price hikes," he said. "I feel really sorry for farmers."

The FedEx/TNT decision came into force this week.

Australia's Regionalisation Minister Bridget McKenzie, herself a recreational shooter, said it wasn't up to couriers to discriminate against highly-regulated legal products that regional Australians use for economic, social and environmental benefits.

Saying she understood that for farmers battling natural disasters, a gun club outing could be the only time spent off property and crucial for mental health relief, Ms McKenzie said the decision by the freight companies completely disregarded the importance of firearms for regional Australians.

"Producers have told me they're concerned about the ban and its impact on their ability to manage animal welfare issues appropriately and humanely," she said. "We have to remember that firearms are crucial for feral pest management, as well as recreation."

Ms McKenzie said it was fortunate there were courier service competitors like Australia Post that regional and rural Australians could rely on, but Mr Walsh said they were unable to ship products over 105cm as well as dangerous goods, which ruled out 80 per cent of the freight in question.

"As such, SIFA calls on Minister Paul Fletcher to work with firearms industry stakeholders to overcome these issues and develop a solution for the Australian firearms industry so all businesses can utilise our national carrier," he said.

Mr Fletcher is the minister that the Australia Post portfolio comes under.

Mr Walsh said he had spoken to most freight and courier companies in Australia since the FedEx/TNT announcement had been made, finding that while two or three companies were looking at pricing a solution for the industry, it wouldn't be the comprehensive national network that had been available.

"Some remote areas won't be serviced and will have to head to their nearest centre to pick up weapons and ammunition themselves - there's a risk in that," Mr Walsh said. "We want to uphold public safety and an integrated solution does that."

He was not able to explain what the "complex and diverse regulations and requirements to move firearms, explosives and/or ammunition across borders and intrastate" would be that Northline said it was grappling with. 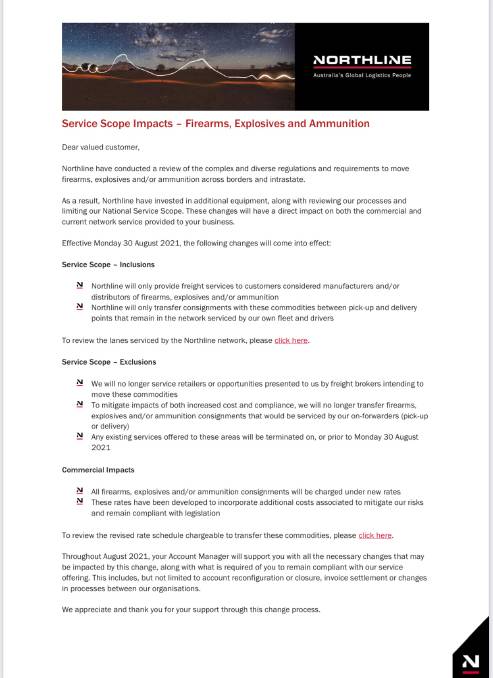 An excerpt from the Northline letter provided to customers last week.

"We are unaware of any," he said. "There has also been no change to regulation."

According to the Northline letter, as well as no longer servicing retailers or opportunities presented to it by freight brokers intending to move firearms, weapons and/or ammunition, it will no longer transfer consignments that would be serviced by on-forwarders, 'to mitigate impacts of increased cost and compliance'.

Northline was contacted for comment but hasn't yet responded.

Mr Walsh said it was troubling that the two freight companies refused to work with retailers without explanation.

"I suspect it's part of the cancel culture movement," he said.

"If someone would come out and tell us their problem, we could fix it.

"Both Northline and FedEx/TNT are putting their prices up as well - is this a capitalising on COVID restrictions on travel.

"Again, there's been no consultation with anyone."