An impressive Poll Merino ram with high ranking carcase figures has sold for a new $10,000 stud record for O'Brien stud, Kyancutta at their annual sale. 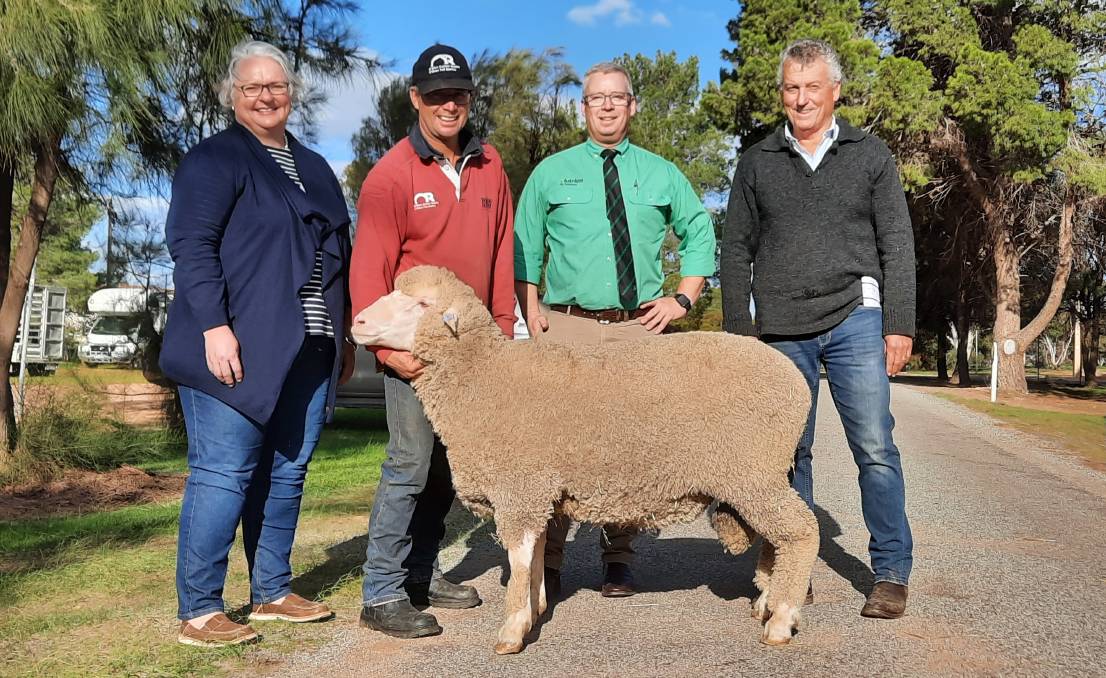 An impressive Poll Merino ram with high ranking carcase figures has sold for a new $10,000 stud record for O'Brien stud, Kyancutta at their annual sale.

The star of last Thursday's sale held at the Wudinna Showgrounds was lot 2, O'Brien 200557

The 19.0 micron, which weighed 115.5 kilograms at 15 months of age was bought by the Keller family, Ramsgate Poll Merino stud, Tintinara, with their Murray Bridge based classer Bill Walker doing the bidding.

"OB 200557 was of great interest due in part to his pedigree including the sire, Ella Matta 170274, who is in the top 20 per cent nationally for clean fleece weight," he said.

"The fact that he was also responsible in producing a visually powerful ram with a hindquarter with a great chump and wide backend with ASBV trait leading numbers including Pwt 6.9, Ywt 8.4 and a levelling AWT of 8.5 was of great intrigue to me in representing the final purchaser."

Stud co-principal Darren O'Brien said in the fortnight prior to the sale they had considered retaining the ram.

"It is hard to find those sheep that look like their ASBVs (Australian Sheep Breeding Values)," he said.

"He is +14 for clean fleece weight though so he is not the perfect sheep but he is a building block to get there."

The early high set the buoyant tone for the remainder of the Poll Merino offering where 102 of 117,largely April/May 2020 drop rams sold for a $2020 average.

Upper Eyre Peninsula buyers made up the bulk of the 32 registered bidders including TJ Patterson, Streaky Bay, who secured 19 rams for a $1305 average.

Sixteen of these were Dohnes.

Fifty rams sold in the sale for $1000 or less providing some great value buying.

Nutrien SA stud stock manager and the sale's auctioneer Gordon Wood said there was no doubt the Poll Merino offering was the best lineup he had stood over at the stud.

"They are meaty Poll Merinos with plenty of fleece and solid ASBVs, especially carcase ASBVs ".

Although there was a modest drop in average price across both breeds Mr O'Brien said it was pleasing to sell their most rams ever and have the continued support of their loyal clients.

They also attracted a couple of new buyers from Kimba and Quorn.

"Some good blokes chased the good sheep, especially the good wools, but no one went away empty handed which is what you want in a sale," he said.

By mating the ewe lambs in their studs for the past three years Mr O'Brien said they had improved the depth of their offering.

He said they had increased their Poll Merino numbers this year as there had been a swing among their clients back to Merinos as they recognising the breed's "big improvements" in carcase quality.

Mr O'Brien was confident the Dohne breed still had a good future but said it was important Merino and Dohne ASBVs could be directly compared.

"With Dohnes you are giving away 15-20pc in fleece weight to the Merinos so we need to find out what the Dohnes are good at, we know they are definitely good at other things," he said.